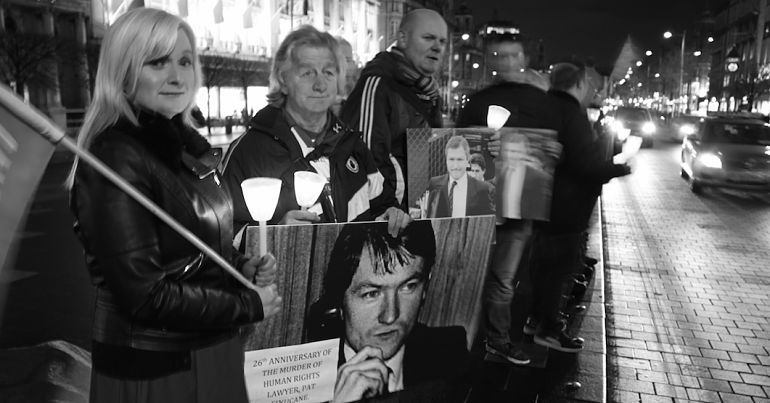 The Finucane family, like so many other families in Ireland, is demanding justice and a full and public inquiry.

As a human rights lawyer, Finucane successfully represented Irish republicans. So loyalist paramilitaries were reportedly told he was in the IRA. His son Michael said this was a “grievous insult”. And it demonstrated that they couldn’t differentiate between “the role of the lawyer and the offence suspected of the client”.

Before his murder, Finucane’s life was under threat. And journalist Ed Moloney claimed that Irish and British officials were aware of these threats.

But most notable were the comments of Tory minister Douglas Hogg. Hogg said he believed some solicitors in the north of Ireland were:

unduly sympathetic to the cause of the IRA

Just three weeks later, Finucane was dead. Some people feel the events could be connected.

An investigation into collusion in Ireland called for a full public inquiry into Finucane’s murder. Then, Sir Desmond de Silva’s report into the murder forced David Cameron to apologise.

The former prime minister also admitted that de Silva’s report showed “shocking levels of state collusion”. But to the family’s disappointment, de Silva said there was no “overarching state conspiracy”.

The family dismissed the report as a “whitewash”. And Amnesty International said it:

had failed the Finucane family and had not delivered them justice

So the family continues its demands for a public inquiry. In June 2018, the Finucanes took a case to the Supreme Court in London. That Supreme Court judgement is pending.

At an event in west Belfast to mark 30 years since his murder, his daughter Katherine stated:

We keep my dad alive because we carry him in us. We not only fight for justice for him but for a future fit for our children and one that he would be proud of.

His son John said his father’s best years were yet to come, and that the UDA murdered him:

As The Canary has reported, there are many other murders in Ireland with links to the British state. And just like the Finucane family, these families need justice.

The British government claims there was no war in Ireland, and that paramilitaries were common criminals. If it believes this to be true, it has nothing to fear from a full and public inquiry.