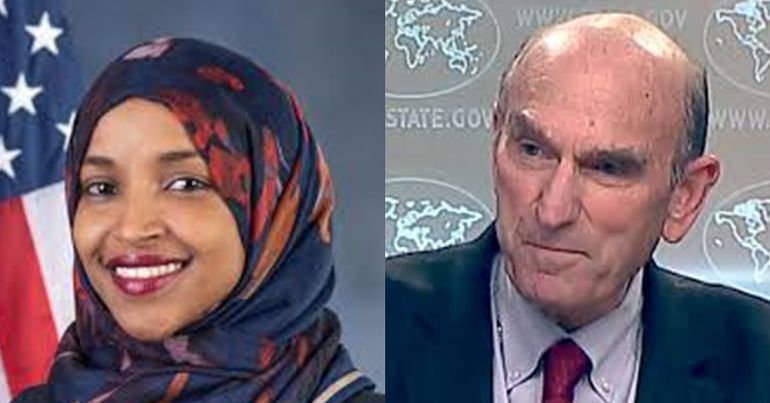 Elliott Abrams is a seasoned war hawk whom Donald Trump recently brought in to boost the US-led coup attempt in Venezuela. But today wasn’t Abrams’ day. Because recently elected representative Ilhan Omar absolutely destroyed him, with one killer question.

Abrams is an architect of various chapters of bloody US intervention. He was one of the key actors behind the 2003 invasion of Iraq, and has a horrific record of “crushing democracy” in Latin America. This includes using ‘humanitarian aid’ programmes to smuggle arms to the ‘Contra’ terrorists in Nicaragua. And he later pleaded guilty to withholding information from congress about his role in supporting Latin American death squads.

His blood-soaked record was probably most disturbing in El Salvador and Guatemala. As The Canary previously detailed, the US “sent money, training and military advisers to the state’s military and death squads”; and these forces were “responsible for the vast majority of over 75,000 deaths”.

In particular, on 11 December 1981, the US-funded Salvadoran military killed as many as 1,000 people “in the largest single massacre in recent Latin American history”. Before the killing began, they raped many of the village’s women and girls – some as young as 10 years old. The day after the massacre, Abrams began his job as assistant secretary of state for human rights and humanitarian affairs. And he told the senate that reports concerning the massacre were “not credible”; instead, he claimed they were being “significantly misused” as propaganda.

He later went even further, saying:

The administration’s record in El Salvador is one of fabulous achievement.

And as the Nation reported, under US president Ronald Reagan:

Abrams sought to ensure that General Efraín Ríos Montt, Guatemala’s then-dictator, could carry out “acts of genocide”—those are the legally binding words of Guatemala’s United Nations–backed Commission for Historical Clarification—against the indigenous people in the Ixil region… without any pesky interference from human-rights organizations, much less the US government.

Abrams is now Washington’s special envoy to Venezuela. But on 13 February, Omar grilled Abrams on his terrible record in Central America:

.@IlhanMN questioning Elliott Abrams about his previous support of genocide in Guatemala pic.twitter.com/MIGAG4WI1m

She also asked him a killer question, linking current US destabilisation efforts in Venezuela to Abrams’ record elsewhere:

Would you support an armed faction within Venezuela that engages in war crimes, crimes against humanity, or genocide if you believed they were serving US interests as you did in Guatemala, El Salvador and Nicaragua?

.@IlhanMN asks Elliott Abrams whether he would support an armed faction in Venezuela that committed crimes against humanity or genocide if it served American interests as he did in Nicaragua, Guatemala and El Salvador.

Shortly after that question (which Abrams refused to answer), activists from social justice movement CODEPINK also made their feelings clear:

On 11 February, much of the political and media establishment turned on Omar for her legitimate criticism of Israel. But her takedown of Abrams and US interventionism in Latin America shows that she won’t be silent in the face of injustice. She’s very much here to stay. And she’s quickly becoming a key voice in progressive US politics.