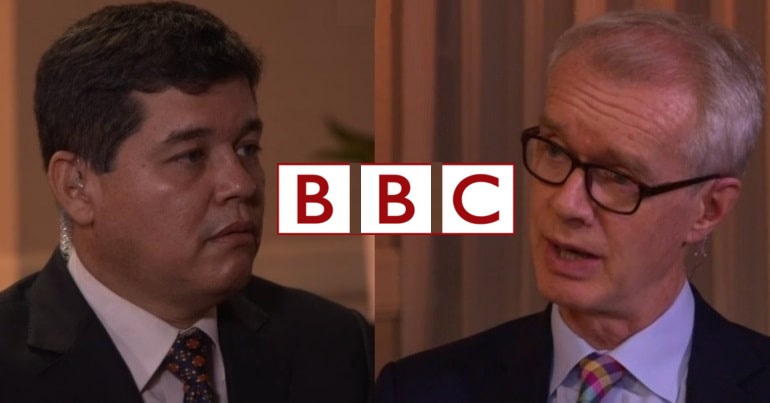 Late on 5 February 2019, BBC HARDtalk aired an interview with Venezuelan defector Christian Zerpa. The latter was a judge on the Venezuelan Supreme Court. Evidence has since come to light, however, which questions the accuracy of the BBC translation of some of Zerpa’s responses. Yet the BBC continues to stand by its seriously questionable translations.

Blatant exaggerations during a poor interview

The Canary previously published a rigorous critique of the HARDtalk interview:

A professional Spanish interpreter, however, has since told The Canary that he had serious doubts about some of the BBC‘s translations. In particular, certain translations significantly inflated words or phrases relating to quantities.

While the interpreter prefers to remain anonymous, two fluent Spanish speakers at The Canary have corroborated that the exaggerations are very real.

The Canary contacted the BBC for an explanation. We explained that:

While there are a number of errors and discrepancies, we shall focus on the following three, which are the most blatant and egregious.

Chavistas prosecute anyone who dissents from the way they rule, and there’s an infinite amount of cases of public figures and Chavistas that have been incarcerated, and many have died in jail.

That exaggerates “various/different cases“ to “an infinite amount of cases“; a clear and significant exaggeration of Zerpa’s words. Then, “some have died” becomes “many have died“; again, a blatant overstatement.

And it is incomprehensible that some people who didn’t even have a place to live, right now have become economic potentates, rich millionaires.

This takes “with a lot of money” and turns it into “rich millionaires“; quite a leap.

The BBC responded to The Canary‘s inquiry with the following statement:

The process HARDtalk uses for translation and subtitling goes through several checks, including independent simultaneous translators. We are confident that our subtitles are fair when considering the full context of Mr Zerpa’s answers.

Zerpa: the information that the BBC left out

BBC HARDtalk also failed to mention two more key facts about Zerpa. The first is that the Venezuelan Supreme Court released a statement alleging that he had been under investigation since November 2018. According to Venezuelanalysis, the allegations include:

“sexual harassment, psychological violence, and lascivious acts in the workplace,” which had allegedly led to many female employees quitting. These accusations, the court claims, pushed Zerpa to abandon the country “to avoid justice and so that his crimes may remain unpunished.”

The Canadian government also targeted Zerpa (along with Venezuela as a whole) with debilitating sanctions.

The exaggerated interpretations, the leading questions and statements from Sackur, and the lack of discussion of Zerpa’s possible incentives for defecting all amount to a serious BBC fail. And these all appear to work in favour of the ongoing Western-led coup attempt in Venezuela rather than against it.

Licence-fee payers deserve so much better.

–  Read how an establishment expert confirmed that the purpose of US sanctions is to “make the economy scream”; and a millionaire investor said the policy of the US-led coup ‘all about oil’.

– Write to or call the BBC to tell them what you think about the failings of this interview. Be sure to be concise, specific and polite in order to be effective.

– Read about Jeremy Corbyn’s proposals to reform UK media, and write to your MP and tell them if you support Corbyn’s media reform proposals.