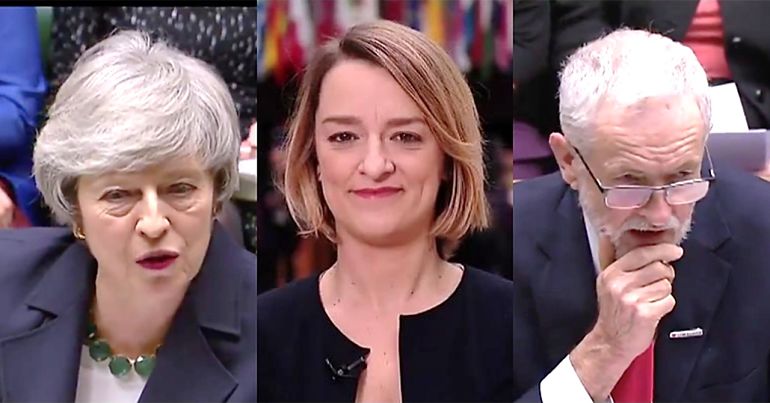 On 13 February, Jeremy Corbyn used his time at Prime Minister’s Questions (PMQs) to grill Theresa May over her government’s disastrous Brexit ferry plan. Yes, the one where it awarded a multi-million-pound contract to Seaborne, a ferry company that didn’t have any ferries. The one that copied and pasted the terms and conditions on its website from a takeaway food company. And the one that ended up not even having a port to run said ferries before the government finally cancelled the contract.

It seems like Corbyn’s tactic worked. Because he even won over the BBC‘s political editor, Laura Kuenssberg.

Corbyn uses all six questions to go on ferry fiasco and go after Grayling’s scalp – May not budging but after rail problems , drones and ferries, it’s an easy target – Corbyn unusually focused on one specific issue to good effect

Corbyn slammed May and transport secretary Chris Grayling over the fiasco:

Jeremy Corbyn: "How on earth can the prime minister say she has confidence in the transport secretary?"

And when May replied that “due diligence” had taken place when awarding the ferry contract, Corbyn expressed surprise that she could “keep a straight face”:

Jeremy Corbyn: "I'm really impressed that the prime minister can keep a straight face while she said due diligence was carried out"

Because as journalist Alberto Nardelli pointed out, there was not “a formal assessment of Seaborne financial stability”:

May said in #PMQs that due diligence was carried out on Seaborne by Deloitte, Mott MacDonald and Slaughter & May.

Deloitte: “The standard tests could not be completed on Seaborne given a lack of existing financial information due to it only being incorporated in April 2017.” pic.twitter.com/3cWoJDmk1A

Jesus Christ did you just say Corbyn did something good? I need to lie down

Laura have you had a bump on the head? Whatever next you will be praising Corbyn.

Although a few tweets later, Kuenssberg was back on form:

Wow… there is a lot of this about – people have been talking for many months about poss Labour breakaway – but ingredients for it are certainly there right now – whether it happens is a different Q https://t.co/HASU0ntULA

It should be satire

Perhaps it’s not surprising that Kuenssberg praised Corbyn. After all, even for the government’s most ardent supporters, it’s got to be pretty hard to defend the Seaborne scandal.