Activists march to Wales in support of hunger strikers - Canary 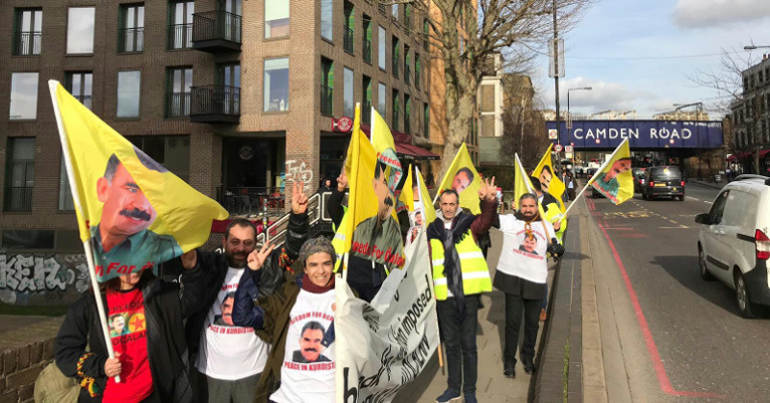 In a bid to break the silence over the critical condition of Kurdish hunger strikers, solidarity activists in the UK are currently marching from London to Wales. They will arrive in Newport on 15 February, where they will meet Ilhan Sis (also known as Imam), who is approaching his 60th day of hunger strike. He is one of hundreds of Kurdish hunger strikers around the world calling for an end to the solitary confinement of their leader, Abdullah Öcalan.

The Canary previously interviewed Sis. He told us that his hunger strike is “irreversible”. And he says that he’s now getting bad headaches and that he’s constantly tired, but that his morale is high. Activist Mark Campbell has reported that Sis has lost 11kg, and added:

Make no mistake, Imam is prepared to die if the demands of the hunger strikers are not met.

Please support Welsh Kurd Imam Sis now on day 58 of his hunger strike in Newport to break the isolation of Abdullah Öcalan. Friday will mark 20 years of Öcalan's incarceration in solitary confinement on an island prison in Turkey. His life is in your hands! #BreakTheIsolation pic.twitter.com/ylCA4jtkSE

The march began in London on 12 February and will arrive in Newport on 15 February. As the hunger strikers’ lives become more and more at stake, it is important that solidarity activists join the march.

Now is not the time to stay at home or ignore the hunger strikes. You must do whatever you can to increase the pressure on the Turkish regime to adhere to its own agreed legal obligations…ACT NOW before it’s too late.

Activists are tweeting about the march and are encouraging others to join:

SOLIDARITY from Bristol Kurdish Solidarity for #ImamSis now on Day 58 of hunger strike. A march is just now leaving the Kurdish Assembly, (previously known as Kurdish Community Centre) to march all the way to Wales from London! Please plan to join along the way! #TwitterKurds pic.twitter.com/cIbVWIbKDQ

The Long March to Wales has began and will continue from Reading tomorrow at 9am from 27 School Road, Reading, RG31 5AR. The next place after that to join will be Swindon on Thursday. #BreaktheSilence, #EndtheIsolation https://t.co/Zx1ziIaVzB

YOU CAN JOIN The Long March to Wales in solidarity with Imam Sis, on Day 58 and with the Kurdish Hunger Strike. It has set off but you will be able to join it in Reading tomorrow Wednesday 13th February. DM me for details. #ImamSis #TwitterKurds #HungerStrike #Wales. pic.twitter.com/5yTfs2veau

Sis is also calling on solidarity activists around the UK to join the march from London to Newport:

I’d like to make a direct call to our friends who are in solidarity with the Kurdish people’s struggle and the hunger strikes to join this march that will arrive in Wales on 15 February, on the 20th anniversary of internationalist conspiracy on our leader Abdullah Öcalan….Together we are stronger. Let’s join our voices together and break the silence and break the isolation.