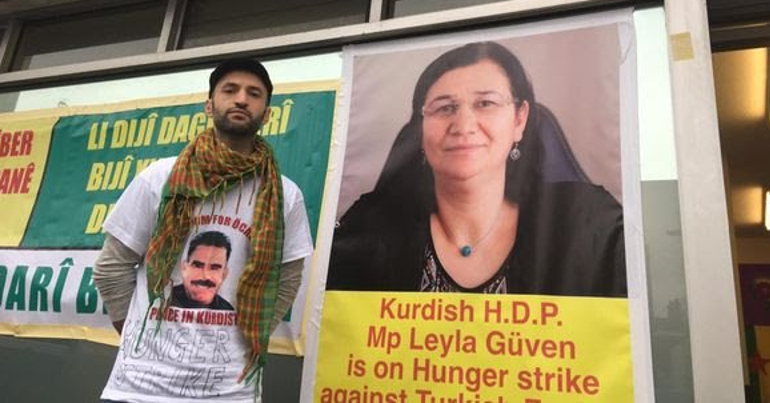 Kurdish politicians, political prisoners and activists around the world are carrying out indefinite hunger strikes, with a number of people in critical condition. They are demanding the end of the Turkish-imposed isolation of Kurdish leader Abdullah ‘Apo’ Öcalan.

Leyla Güven, a Kurdish politician imprisoned by Turkey, first declared that she was going on hunger strike in November 2018. Since then, more than 300 people all over the world – including in Turkey, Wales, France, and Canada – have joined her on hunger strike. Their numbers continue to increase.

Güven is now approaching her 90th day without food, and her health is in a critical condition. In South Kurdistan (northern Iraq), Nasir Yagiz has reached day 76 and is suffering from blackouts. He vows to continue his hunger strike “to the end“.

The Canary spoke to 32-year-old Kurdish activist Ilhan Sis. He’s on hunger strike in his home town of Newport in Wales, and has gone without food for 50 days. “The main aim of my hunger strike is to end the isolation imposed on our leader Abdullah Öcalan,” Sis explained. “Kurds shout ‘without our leader, there is no life’, meaning that we will never accept a life and a solution without our leader Apo.”

Arrested with the help of the CIA in 1999, Turkey has kept Öcalan in solitary confinement for 20 years. Denied access to lawyers, he has had virtually no contact with the outside world. Sis describes Öcalan as:

Known as an intellectual thinker and in recent years a supporter of stateless democracy, Öcalan’s ideas have inspired movements around the world – most notably the Rojava revolution in northern Syria.

Öcalan is denied universally recognised, fundamental human rights, set out by numerous international declarations and agreements. Can anyone talk about justice and equality in a world system that allows this?

Under Turkey’s increasingly authoritarian president Recep Tayyip Erdoğan, growing numbers of elected Kurdish and leftist politicians continue to be imprisoned. The state tortures its citizens, media organisations have been shut down, and websites are censored. Turkey is now the number one country in the world for locking up journalists critical of the government. The Permanent Peoples’ Tribunal, meanwhile, has found the Turkish regime guilty of war crimes and crimes against humanity.

In 2015 and 2016, the Turkish military attacked majority-Kurdish cities in the south-east of the country, killing hundreds and displacing at least half a million people. And it continues to a occupy the majority-Kurdish region of Afrin in northern Syria.

Turkey is a UK ally and a NATO member. It also has one of the most powerful militaries in the world. Sis explained that:

The EU and the UK continue to maintain a strategic relationship with the AKP-MHP [Turkish government] regime, despite being aware of the conditions of solitary confinement [for Öcalan] and the significant number of human rights violations.

As Turkey increasingly arms itself to the teeth, the UK government continues to grant arms companies licences they need to export weapons to Turkey.

Who's Arming Turkey: The locations of arms industry companies in the UK that profit from Turkey's war against the Kurds @LDNKurdSol @kurdistansolnet #DefendRojava #RiseUpForRojava
High resolution version available on request pic.twitter.com/aL7eXQmH9e

Sis stated that his hunger strike is “irreversible” and “indefinite” until his demands are met. He insists that the Committee for the Prevention of Torture must visit Imralı prison to document the isolation and torture of Öcalan.

He also demands that:

The political and economic policies which continue to substantially support the AKP-MHP regime must be abandoned. Instead of persisting with double standard policies, the EU and UK must call for an end to the solitary confinement that our leader Apo has been subjected to and show solidarity with the Kurdish people.

Sis also calls for Welsh politicians to discuss the matter in parliament:

Although the hunger strikers’ demands have been brought to the UK parliament’s attention, the Conservative-led government continues to cooperate closely with Erdoğan’s regime. It’s up to ordinary people to stand in solidarity with the hunger strikers, to demand an end to this cosy relationship, and to support the campaign for Öcalan’s freedom.