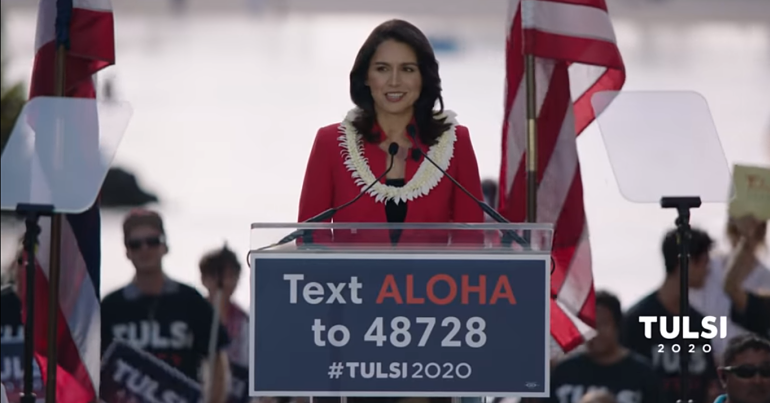 Democratic representative Tulsi Gabbard is hoping to run for the US presidency. And her campaign has set out to be staunchly (and refreshingly) anti-interventionist.

It’s time for her Democratic colleagues to take note.

We must stand up… against powerful politicians from both parties who sit in ivory towers thinking up new wars to wage [and] new places for people to die.

[We] will end the regime change wars that have taken far too many lives and undermined our security.

She has since been a vocal critic of the Western-backed attempted coup in Venezuela and the possibility of intervention in Iran. “We must stand united and stand strong,” she claimed recently, “against those in both [Democratic and Republican] parties who never tire of war”:

And she highlighted the falseness of the US ‘humanitarian intervention’ narrative:

The US needs to stop using our military for regime change & stop intervening in Venezuela’s military. Throughout history, US-led regime change has been waged in the name of humanitarianism, but has resulted in more suffering, destruction & lives lost. #HandsOffVenezuela https://t.co/6kqdzB5DTL

She is also one of few US politicians to criticise Washington’s complicity in the Saudi-led war on Yemen and Israel’s actions in Palestine:

Israel needs to stop using live ammunition in its response to unarmed protesters in Gaza. It has resulted in over 50 dead and thousands seriously wounded.

Last September, @TulsiGabbard gave a wide-ranging and candid interview to @joerogan, covering everything from foreign policy to the drug war. Thread of highlights starts here with her comments providing critical context on North Korea and Kim's behavior https://t.co/Hbnkgw8kFp pic.twitter.com/3SPwnFeV3N

Gabbard vs the US war system

Gabbard’s opposition to US regime change has been far more impressive than that of her Democratic colleagues. And that includes Alexandria Ocasio-Cortez and Bernie Sanders, whose opposition to US intervention in Venezuela has to date been lukewarm.

Popular resistance to the US war system comes at a price, though. And just hours before announcing her candidacy, NBC News smeared Gabbard with alleged links to Russia. Hillary Clinton’s political adviser Adam Parkhomenko also described her as “Putin’s favourite Congresswoman”:

As The Canary recently argued:

The likelihood of being smeared as a Russian stooge seems to be directly related to the popularity of your anti-war message.

In this sense, Gabbard has become the victim of her message’s success. And becoming the ‘new Jill Stein’ is certainly nothing to be ashamed of.

Gabbard is far from perfect. Though a vital critic of US regime change, she has also been previously supportive of both the Hindu nationalist government in India and the military dictatorship of Abdel Fattah el-Sisi in Egypt.

But whatever you think of her, her vocal and dogged criticism of US interventionism is changing the narrative of mainstream US political discourse. She’s asking questions that the powerful don’t want asking. And that can only be a good thing.