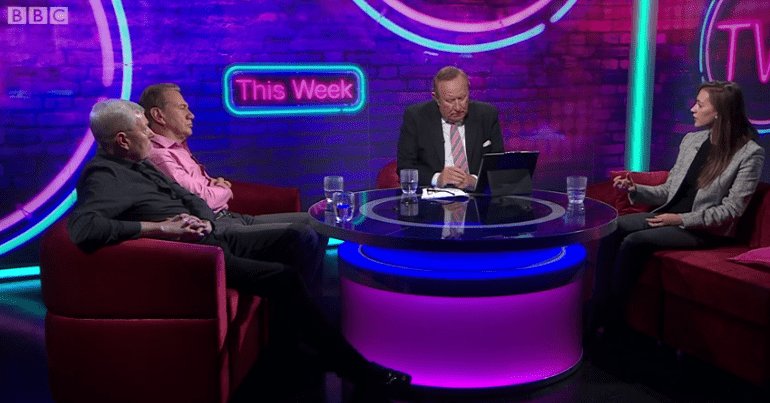 On 26 October, guest Grace Blakeley schooled a room full of establishment stalwarts on the BBC’s This Week. By the end of Blakeley’s economics lesson, presenter Andrew Neil was quiet as a mouse.

Blakeley, a research fellow at The Progressive Policy Think Tank, cut through Conservative Michael Portillo, who was talking about “living within our means”:

Portillo completely out of his depth. pic.twitter.com/F45UJmy1eC

I think Michael’s actually hit on a point there which is that austerity doesn’t work. It’s counterproductive. And this is why we’re seeing the fact that the deficit hasn’t been eliminated. It was supposed to be eliminated in 2015… then it was 2018. And we’re still here having the same questions over and over again. And it’s because we’ve taken money out of the productive base of the economy. It would be like a business saying – a bar – ‘I’m going through hard times so I’m selling all my bar stools, I’m going to close an extra day a week and… I’m going to stop selling the more expensive beer. And ultimately… that reduces your revenues and then the business fails even more… And that’s what we’ve seen with austerity to begin with.

The economy currently only works for people who live off wealth

What would the end of austerity look like under Labour?

She responded by pointing out that Labour’s platform is fundamentally transformative:

"The Labour Manifesto was about changing the structure of the economy so that it works for people that live off work rather than those that live of wealth" Spot on from @graceblakeley on @bbcthisweek pic.twitter.com/0DcTXWCB36

Blakeley later expands on her point that calculated investment in society brings about economic activity. Neil – who is also chairman of Conservative media outlet The Spectator – asked her:

What in your view should be the fiscal constraint on Labour?

And Blakeley took apart the premise of the question:

Governments actually calculate ‘fiscal multiplication’ when they spend to invest. And, however it sounds, it’s not complicated. All it means is the money that is returned into the economy for every £1 of investment. So a fiscal multiplier of three would return £3 for every £1 spent.

The thing is, many people in the mainstream media, the Labour right and the Conservative establishment appear to have either studied flawed economics or ignored fiscal multiplication in order to justify austerity and privatisation, which transfer money from ordinary people to the already-rich. So it seems like a fresh idea on shows like This Week.

When Neil pressed her again on what should be the financial constraint on borrowing to invest, Blakeley responded:

You shouldn’t really need one as long as you’re doing that sensibly.

Well, there are obviously limits but those limits are quite big. Look at the amount that China’s borrowed… the entire expansion of the Chinese economy basically since the crash has been driven by its own government investment… that’s shown the amount of space governments can create – by borrowing – to build things that we need.

To be frank, Blakeley absolutely killed it. Neil, Portillo and Alan Johnson all looked out of their depth.

Austerity is a con, let’s end it ASAP.