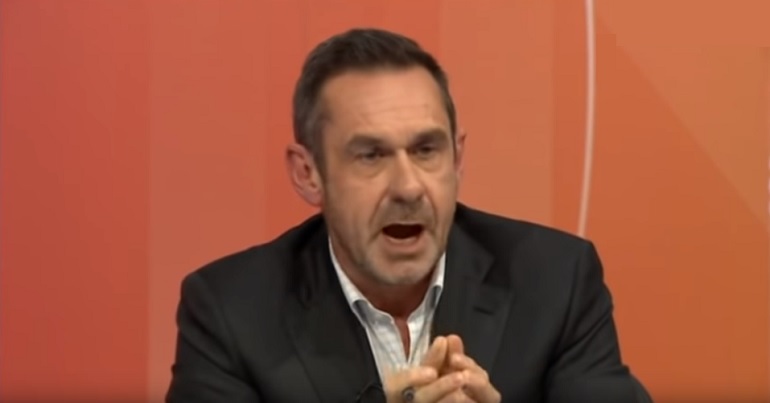 Paul Mason appeared on BBC Question Time on 25 October. On the show, the journalist and author tore apart the argument for austerity, and exposed the political choices behind it.

He was joined in his attack by a number of audience members. Each spoke about a different area of policy that showed the shortcomings of austerity.

“A political choice to shrink the state”

Mason’s contribution followed a question from the audience:

How can we believe claims that austerity is over, given that thousands are still reliant on food banks?

The journalist responded with a damning attack on the austerity project and those who devised it:

I think it [austerity] should be over. I think it was a political choice to shrink the state, from a bunch of people who have got nothing in common with most people in this room, who send their kids to private school, who can afford a life of luxury.

They were quite happy to force ordinary people to pay the price of the crisis of 2008 caused by the banks, caused, yes too, by bad regulation by a Labour government.

He then went onto to criticise the impact of austerity on the economy:

Austerity wasn’t necessary. And they did it too hard. It flat-lined the economy for three or four years. And eventually it recovered.

It is time not just turn the taps on… It is time for people in towns like this to start to feel what the 21st century should feel like.

You can watch Mason’s contributions in full here:

Mason wasn’t the only one to attack austerity on the show. A number of audience members also had strong words about it. One highlighted the human impact of austerity, and the effect of Universal Credit:

I despair, I really do. The people that you discussed with regards to Brexit are the marginalised people in society. They genuinely, they have no interest in your Brexit, or your policy, or whichever way you look at Brexit at all.

These people are too busy trying to put food on their plates. And they’re the people that use the foodbanks, the marginalised people in society, that are gonna be further penalised by the roll out of Universal Credit on the 6 December.

BREXIT: "I despair, I really do – the people you are talking about are the most marginalised in society" This audience member says many people in Britain have pressing concerns other than Brexit – including the role out of Universal Credit #bbcqt pic.twitter.com/hEZdjHkLH8

Another slammed the condition of public services under austerity in Barrow, where the show was filmed:

In the 21st century, the utilities here, the infrastructure is breaking down. In certain towns and villages surrounding Barrow, they’re ending the bus services. Roads are breaking up, the roads are cracking up.

How in this day and age, if the Conservatives are doing such a wonderful job, are we seeing the implosion of everything we have here?

And a third audience member pulled apart the privatisation of public services that has taken place alongside austerity:

When the Tories say that they are putting more money into public services, because of policies of increased privatisation, how much of that money is going down a black well into the hands of private people?

More and more people are picking apart the government’s arguments for austerity. And they’re also exposing how its impacts are still being felt across the UK.