Activists march on Washington, calling for end to US wars and foreign military bases - The Canary 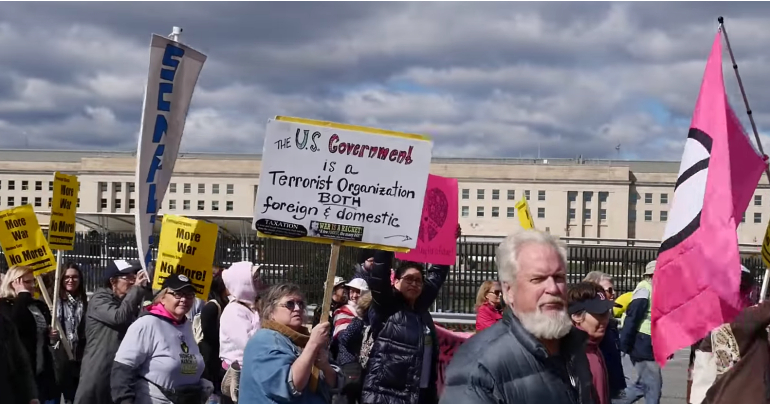 A little-publicized anti-imperialism mobilization just took place near the US capital. Billed as a continuation of the Women’s March, which saw millions protest the election of Donald Trump to the presidency, this time the focus was on US wars and military bases around the world. But it seems like neither of the major US political parties is paying much attention.

On 21 October, protesters took part in the Women’s March on the Pentagon (WMOP). The Canary understands that hundreds of people were in attendance. The main event took place at the US Department of Defense headquarters – the Pentagon.

Protesters chose the date to commemorate the 51st anniversary of the 1967 anti-war march. This was the culmination of growing disaffection with the US war on Vietnam.

WMOP’s main organizer was famous peace activist Cindy Sheehan, whose son died in another controversial US foreign entanglement – the invasion and occupation of Iraq.

Sheehan emphasized that both major parties are about equally to blame for the seemingly endless US-led wars and other military involvements. She said:

The Democrats are just as bad as the Republicans.

We don’t like Trump, but we don’t like Trump for the same reason that we didn’t like Obama and Bush. They are representative of the most evil, violent, racist and sexist [people] in [the US] empire, if not in history.

A simple but powerful message: end US wars

The protesters’ demand was a simple but powerful one: a total end to all US military operations around the world. And the mobilization could not have come at a more important time.

A White House report to congress in March of this year admitted that the US is currently involved in seven different wars across the globe. This includes the 16-year-long military engagement in Afghanistan, the longest-lasting war in US history. Others include similarly well-known conflicts in the Middle East: Iraq; Syria; and the Saudi-led war on Yemen.

The remaining three are taking place in Africa: in Libya, where the removal of Muammar Gaddafi left a power vacuum; in Somalia, which became a typical example of a failed state; and in Niger, where the US has sided with anti-Boko Haram forces.

The second focus of the mobilization was a call on the US government to close all foreign military bases, the number of which currently stands at nearly 800. In his 2017 book Base Nation: How U.S. Military Bases Abroad Harm America and the World, anthropologist David Vine documents the damage that US military presence has caused in over 1,000 locations worldwide. He says this not only pushes the US into partnerships with dictators (fuelling anti-Western sentiment), but also breeds sexual violence, environmental destruction, and the weakening of local economies. And this all costs the US taxpayer tens of billions of dollars – roughly $100bn per year.

We’re being robbed blind by the war-profiteers, and the political bipartisan system that is in bed with them. That is depriving us of our hard-won resources – our tax dollars.

Social investment instead of war

Clearly, US citizens are starting to wake up to the waste of valuable public money on endless wars and occupations – and the devastation these cause. And the WMOP organizers have an attractive but simple alternative: take the military spending and redirect it to social spending that actually helps people.

US society desperately needs this social investment to address the many injustices that exist despite the country being one of the wealthiest on Earth. These include one of the highest child poverty rates among wealthy countries, hundreds of thousands of homeless people, and hundreds of thousands of incarcerated non-violent drug offenders who ought to be reintegrated back into mainstream society.

The time is ripe for the US to end this era of warmongering and begin a new era of building social capital. And quite evidently, there is significant public support for such a move. What’s missing is the willingness of the political class to take heed.