Government inaction is leading to our extinction. Time to rebel. - Canary 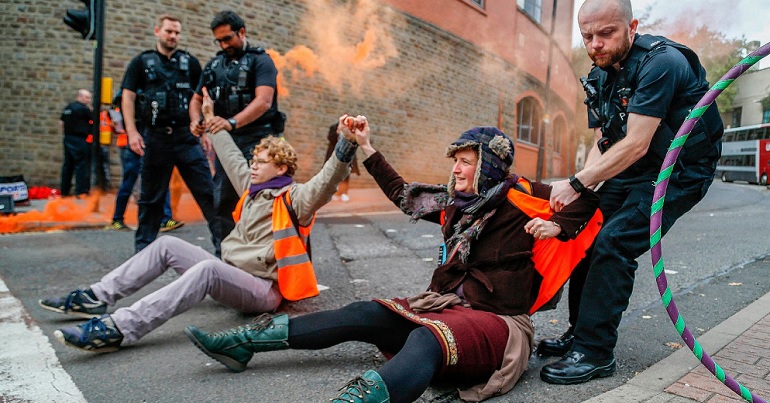 The world is in chaos; climate breakdown and ecological catastrophe puts us all on a knife edge. But one group believes we can end this. How? By rebellion in the face of the possible extinction event that’s knocking at our door.

The Extinction Rebellion campaign is under the banner of the RisingUp activist network. It aims to get people across the country to take part in non-violent but disruptive acts of civil disobedience. These will highlight the climate and ecological catastrophe we’re all facing; but also the inaction of politicians and “elites”.

As The Canary has documented, the climate and ecological breakdown we face takes many forms. From fracking to the food industry; plastic pollution and Heathrow’s third runway; to the sixth mass extinction event that’s already wiped out 80% of some species’ populations. We’re on a collision course with disaster.

Most recently, the Intergovernmental Panel on Climate Change (IPCC) released a report on the climate breakdown. As the IPCC warned, we could cross the threshold into climate catastrophe as soon as 2030. And it noted that trillions of dollars in investment is needed to stop this.

It will officially launch its “Declaration of Rebellion” on 31 October. At 10am in Parliament Square, the group and its supporters will gather to tell the government its plans. Its key demands are that the government:

The day will also include an “extinction ceremony” to remember those who’ve died, and who will die, due to our government’s “criminal negligence”. There will be a peaceful sit-in and a banner drop nearby. Extinction Rebellion says that “some will take a nonviolent action which may lead to arrest”.

The list of speakers at the declaration is growing. It currently includes:

On 18 October, Monbiot wrote an article showing his full support for Extinction Rebellion.

A “tyranny of idiocy”

On October 31st we will, in accordance with our conscience and a clear duty to our children; our communities; this nation and planet; declare a non-violent rebellion on behalf of life itself and against our criminally negligent government. Our government’s abject failure to protect citizens and the next generations from unimaginable suffering brought about by climate breakdown and social collapse is no longer acceptable.

We cannot stand idly by and allow the ongoing destruction of all we love. Our hearts break and we rage against this madness. We have a right and duty to rebel in the face of this tyranny of idiocy – in the face of this planned collective suicide. Join us.

If the government does not respond seriously to the our demands, civil disobedience will commence from 12th November. Now is the time because we are out of time. There is nothing left to lose. It is our right and our duty to follow our conscience and rebel.

‘Joining them’ is Extinction Rebellion’s central point. It believes that left alone, governments, corporations, and charities will not do enough. So, a mass movement of people need to mobilise in order to either make these groups take notice – or change things themselves. On 12 November, nonviolent civil disobedience will commence; culminating in “Rebellion Day” on 17 November. This will be coordinated by Extinction Rebellion. Details will be released in due course.

What Extinction Rebellion thinks we all need to be perhaps speaks to its most important agenda. In the group’s own words, all of us need to become:

conscientious, nonviolent protectors of the earth.

It’s a clever spin on the notion of ‘conscientious objectors‘ during war time; something that we are arguably currently in. But Extinction Rebellion is clear that there are no enemies as such in this; that there should be no ‘blaming and shaming’. More, that we as humans need to be ‘conscientious protectors’. Every one of us now needs to say ‘No. I’m not being a part of this anymore. Enough is enough’.

But will the message and its urgency get to people not aware of the gravity of what’s going on?

Extinction Rebellion thinks so. Because while the focus, at present, is on the climate breakdown and ecological crisis, there’s a broader point to be made. Jeremy Parker from the group told The Canary:

The government’s failure to protect us from climate breakdown is just one symptom of a system that is no longer fit for purpose. The mission of Extinction Rebellion is not just to get action on climate change. We want deep, systemic change. We want to fix this broken democracy, which is why we want to create Citizen’s Assemblies using sortition. And we can only do that through mass participation and mass civil disobedience from all walks of life.

And for those who think climate breakdown and ecological crisis doesn’t affect them? Or it’s being exaggerated? Clare Farrell told The Canary:

For those of us who may think this isn’t our issue, I’d suggest they may feel differently in the face of mass crop failures and vicious spikes in food prices. Thanks to the political choices (made in our lifetimes) many of us are struggling to make ends meet, but how would we cope with scarcity, lack, and a weak, unsupportive society when our weekly shop doubles in price? Choices have consequences, and people have made them to bring us here. It is time for different people to make new choices. A more inclusive and generous future has to become a possibility. We must be willing to create it, our children’s lives depend on it.

This is the point. So much of society is now broken that it’s hard to know where to start fixing it. But what we do know is that climate and ecological catastrophe are literally knocking on our doors. By taking drastic action against this impending chaos, it gives us opportunity to press the ‘reset button’ on how society functions as a whole.

As Gail Bradbrook from Extinction Rebellion told The Canary:

It is clear that we need to have the courage to put authentic and real pressure on the Government to take action to solve the ecological crisis, otherwise what future do we have, never mind our children or grandchildren. The IPCC fails us, our Government fails us, the NGOs have failed us. Business as usual is no longer an option.

Enough is now enough. It really is time to rebel. Not just for our sake, but for every living thing on the planet.

– Find out more and show your interest in the Declaration of Rebellion day.