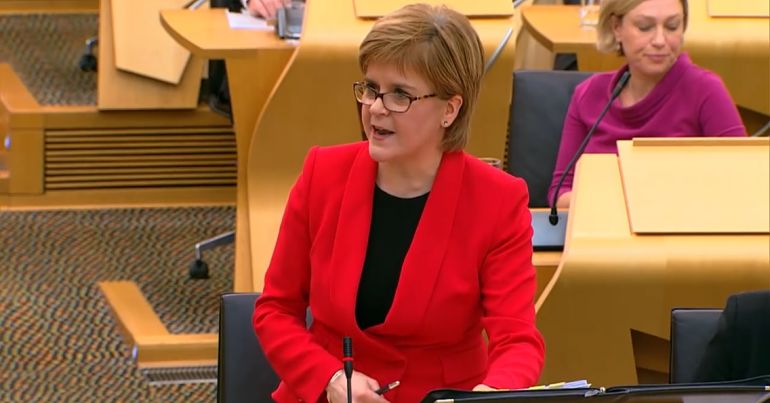 During Scottish First Ministers Questions (FMQs) on 25 October, Nicola Sturgeon called out Conservative MSP Michelle Ballantyne. She did so after Ballantyne made “Dickensian” comments in the Scottish Parliament during a debate on “ending austerity, poverty and inequality” on 24 October.

Ballantyne said during the debate:

It is fair that people on benefits cannot have as many children as they like while people who work and pay their way and do not claim benefits have to make decisions about the number of children they can have. Fairness means fairness to everybody, not to one part of the community.

She was subsequently roasted by SNP MSP for Renfrewshire South Tom Arthur for her “disgraceful” comments. Sturgeon then took the opportunity to call out Ballantyne’s comments after Arthur asked her the following question at FMQs:

Can I ask the first minister for her response to comments made in this chamber yesterday that people reliant upon social security, including those receiving in-work benefits, have no right to have more than two children?

?️ @NicolaSturgeon: "The social security safety net is there for all of us. And frankly shame on the Conservative Party that they are dismantling that." #FMQs pic.twitter.com/0BCtNjomGQ

Meanwhile, the Conservative MSP was sat in the chamber like this as the first minister spoke about the comments she had made: 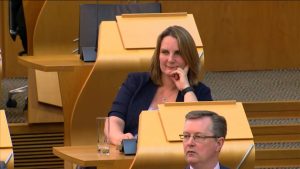 A picture paints a thousand words.

[The comments were] appalling because the idea that being poor should be a barrier to having a family is Dickensian, and I think shows the Scottish Conservatives in their true colours.

Sturgeon also clarified why Ballantyne’s comments were “ignorant”. She said that, from 2019, the rape clause – an exemption from the two-child limit for tax credits for dependants born from “non-consensual conception” – will no longer just apply to newborn children. It will apply to anyone with children who has to claim benefits. This will include families with more than two children if their “circumstances change”.

But Ballantyne’s comments have raised some eyebrows far beyond the chamber in Holyrood. One voter claimed this is the “ideology of the Tory party”:

Disagree Her views, however repugnant, are consistent with the ideology of the Tory party. Let's not pretend she's the exception to the rule.

.@NicolaSturgeon condemns remarks on child credit by @MBallantyneMSP (see below) as "appalling and ignorant". Appalling – idea poverty is a barrier to having a family is "Dickensian". Ignorant – 'rape clause' will soon apply when families circumstances change. #fmqs #FMQs https://t.co/I5z8FywNZj

Following Michelle Ballantyne's vile and ignorant commments, her position as Tory welfare spokesperson is completely untenable. If Ruth Davidson and her Deputy will not remove Ms Ballantyne then she should resign from the Tory front bench.

He also called out Conservative MP Paul Masterton, who selected Ballantyne to speak at a Universal Credit event:

One voter showed their disgust at Ballantyne’s hypocrisy:

She claimed for SIX children. SIX

It’s unlikely that Ballantyne will resign from the frontbench. But her “disgraceful” comments have exposed her personal views towards benefits. And they reflect very badly on the Scottish Conservatives.

This rhetoric has no place in our politics.