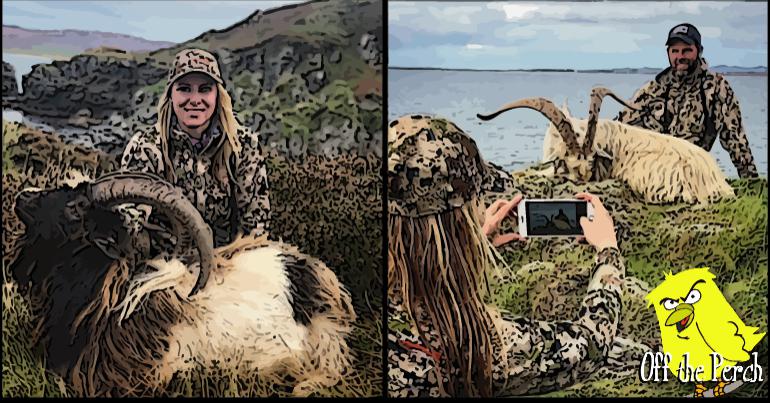 As Hollywood movies have taught us, Americans don’t lead the world for nothing. Their frontier past has filled them with a rugged courage unmatched by any other nation. This was obvious when two Americans travelled to a Scottish island to battle nature’s deadliest terror: GOATS!

Goats are a well-known menace in the British Isles. Here’s a video showing a murder of goats savaging a defenceless woman (VIEWER DISCRETION IS ADVISED):

This goat attempts to tear a woman’s face off with its spoon-sharp hooves (VIEWER DISCRETION IS STRONGLY RECOMMENDED):

Goats are also well known for tenderising the meat of their prey before eating them alive (VIEWERS JUST SHOULDN’T WATCH THIS):

Heroism is a strong word

The brave Americans who slew these fell beasts said:

They’ve got real issues with goats in the UK. Big problem! Some of these suckers grow 10ft tall. My son got his first real erection slaying a goat.

Someone pointed out the UK actually has little issue with goats and sheep beyond occasional nibbling. Trump decried this as:

At the end of the day, it’s easy to make fun of professional hunters, but ask yourself this: would you have the courage to shoot a goat with a high-powered rifle from a distance of several hundreds of metres away?

I didn’t think so.