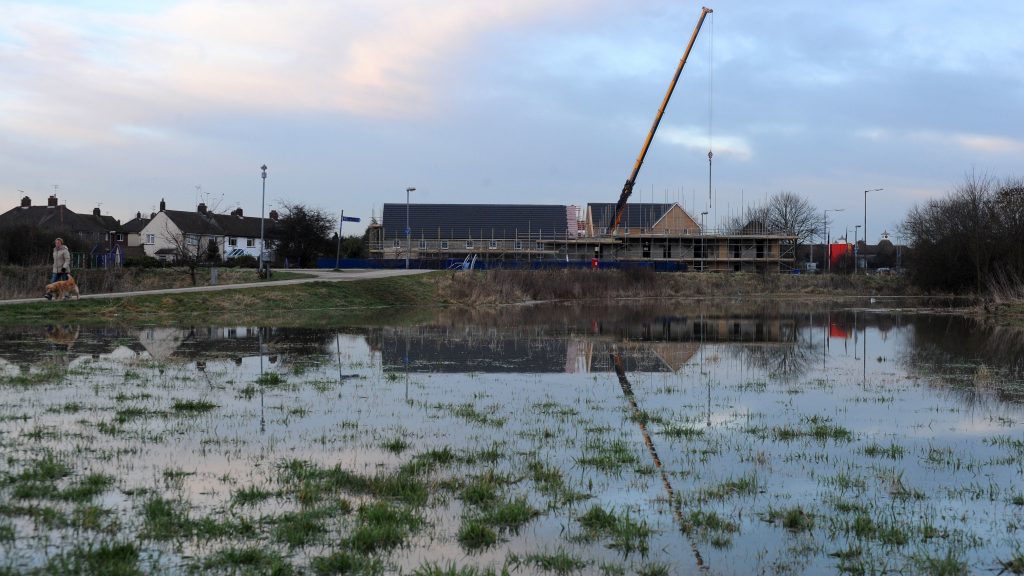 Development on flood plains should only happen if “there is no real alternative”, the head of the Environment Agency is warning.

James Bevan is also warning that, in a few places, the scale of coastal erosion or risk of river or sea flooding will become so great that communities may have to move.

The agency’s chief executive says it would be unrealistic to ban all development on the flood plain, but, if there is no alternative, any building that goes ahead should not increase the risk of flooding for other people.

And homes built on the flood plain should be resilient to flooding; for example, with garages on the ground floor and people living higher up.

His comments come in a speech at the World Water-Tech Innovation Summit in central London on Wednesday when he will warn that a twin track approach to flooding is needed to defuse the “weather bomb”.

That includes the building and maintenance of strong defences to reduce the risk of communities being flooded.

But in the face of climate change increasing the risk of flooding, communities also need help to become more resilient so that, when floods happen, they pose less risk to people, do less damage and life can return to normal more quickly, he is arguing.

The Environment Agency says it is spending £2.6 billion on new flood defences that will create better protection for 300,000 properties by 2021 and more than £1 billion on maintaining existing defences in England.

The speech comes as communities in parts of the UK face ongoing flood threats in the wake of storms which have battered the country with high winds and heavy rain.

Scientists warn that climate change is raising the risk of flooding because winter storms will bring more heavy rainfall in a warming world.

Bevan will tell the conference: “First, we must continue to do what we have been doing for some years now: building and maintaining strong defences to reduce the risk of communities being flooded.

“But, in the face of the climate emergency, we now need a second, parallel, track: making our communities more resilient to flooding so that when it does happen it poses much less risk to people, does much less damage, and life can get back to normal much quicker.

“The best way to defuse the weather bomb is better protection and stronger resilience. We need both.”

With many rivers, much of England is a flood plain and it is where most towns and cities are situated – so, with a growing population, the number of properties in the flood plain is likely to almost double over the next 50 years, he will say.

But while all development cannot be banned, “we can and should insist that development only happens there if there is no real alternative”, does not increase other people’s risk and homes are made resilient.

“Greater resilience also means designing new places, buildings and infrastructure so that they are built to cope with flooding.

“It means building back better after a flood, not simply replacing what we had before, so that homes, businesses and infrastructure are more resilient to future events.

“And it means accepting the hard truth that, in a few places, the scale of coastal erosion and the risk of flooding from rivers or the sea will become so big that it may be better for communities to choose to relocate out of harm’s way.

England has received 141% of its average February rainfall already this month, with some areas seeing a month’s worth of rain in 24 hours, and record water levels seen on many rivers.