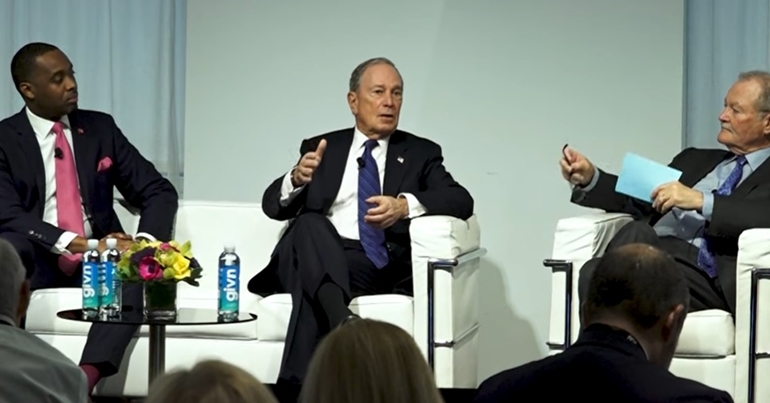 A video of US Democrat presidential hopeful Mike Bloomberg from 2019 has resurfaced. And it highlights precisely why he’s unfit to be president of the US or to hold any public office. Because when he mocked a father and son who died from a drug overdose, it showed yet again how little respect he appears to have for human life:

Mike Bloomberg is a piggish, deranged, authoritarian asshole. It takes a sociopath to mock addicts who die of overdoses this way.

Not sure if I mentioned this but I would never vote for him under any circumstances.

During a “fireside chat” at the Bermuda Executive Forum in New York, the facilitator asked Bloomberg about the ‘biggest challenges facing US industry in a changing political landscape’. Bloomberg responded:

There’s supposedly six million people looking for a job, but if you really look at the people looking for a job, some of the estimates are that half of them have such a drug problem, they… would never pass…Only 25% of young people in America could qualify to join the military, if they wanted to, they’re just not in physical shape – they can’t read, they can’t write – and the drug problem is something that is just astronomical

He then went on to mock a father and son who died from a drug overdose saying:

It’s not a good family

When a clip from the interview was retweeted in disgust by the Intercept journalist Glenn Greenwald, it was clear that some other people online felt the same:

I agree. I will never vote for Bloomberg either..ever. not me, not my adult children, not my husband , not my family…nobody. plutes gonna plute..

There's a legion of us who will not vote for him under any circumstances. Welcome

Another person could see a humorous side of Greenwald’s tweet but agreed nonetheless:

But that wasn’t it

And bad as that was, it wasn’t the only thing that highlighted his unsuitability for office. Earlier in that “fireside chat” he mocked trans rights while stating it wasn’t something most Americans cared about:

some guy wearing a dress and whether he/she or it can go to the locker room with their daughter, that’s not a winning formula for most people. They care about healthcare

And a more recent video of Bloomberg posted on 16 February shows how he feels about healthcare and who it is that should get priority:

“If you show up with prostate cancer & you’re 95 years old, we should say…there’s no cure, we can’t do anything.”

There’s only one choice

During the Bermuda Executive Forum interview, Bloomberg ruled himself out of the running for the Republican nomination because it has “an incumbent president”. And he ruled himself out of the Democrat nomination because, he said, the party had “moved very far left, and my views are much more centralist”. He also suggested he’d be too old to run anyway.

Bloomberg has since changed his mind and thrown his hat into the Democrat ring. But thankfully his candidacy could be irrelevant. Because people in the US seem to be moving towards the left. Bloomberg may well be forced to revisit his earlier position.