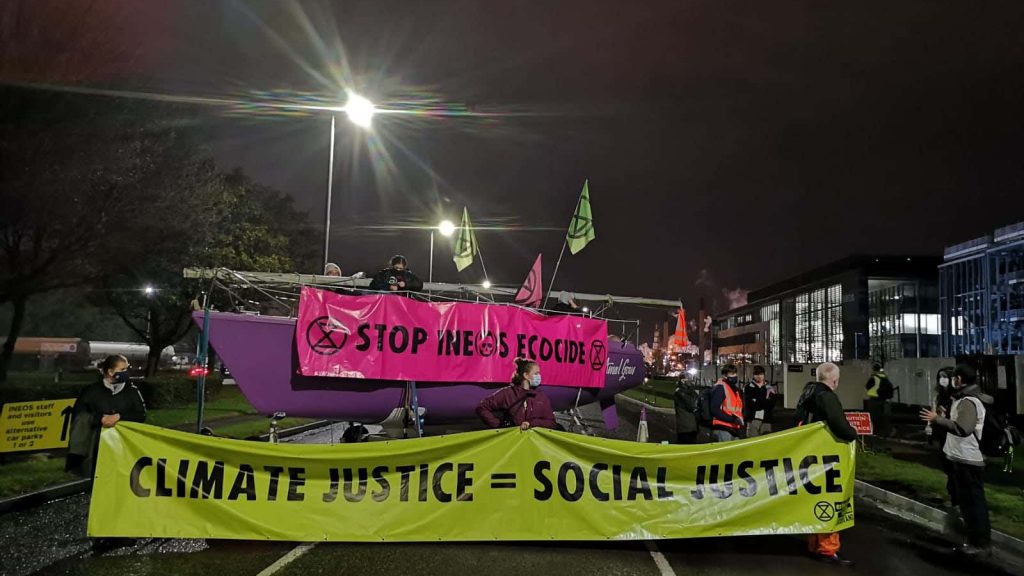 Climate activists have blocked the gates of the Ineos oil refinery at Grangemouth with boats in a protest against pollution.

Extinction Rebellion Scotland claims Ineos is Scotland’s biggest climate polluter. And the group is staging the blockade as part of a programme of action.

Small groups of no more than six people have locked themselves together at the gates. They aim to remain there all day on 23 October.

Two boats are being used to block the entrances to the refinery and the headquarters.

“We are running out of time”

It also stores fracked gas from the States. Given the widely assumed ‘ban’ on fracking in Scotland, for fracked gas which harms communities worldwide to still be processed here is outrageously hypocritical.

We are here to expose the climate destruction that Ineos is causing. We are running out of time, with the climate crisis affecting so many in the global south already.

Extinction Rebellion Scotland said it’s taking coronavirus (Covid-19) safety precautions during the protests. These include face masks, social distancing and use of hand sanitiser, while participating activists are using a track and trace app.

A demonstration is also due to take place outside the Ineos headquarters in London on the morning of 23 October.

We’re 10 years on from Scotland’s first Climate Act, and yet plants such as Grangemouth are still being expanded.

We cannot trust big oil corporations to prioritise the planet and the long-term wellbeing of either their workers or the general population above squeezing every last drop of oil and gas out of the North Sea, no matter how much they try to distract us with greenwash about renewables.

Police said they’re aware of the situation. Ineos has been asked for comment.