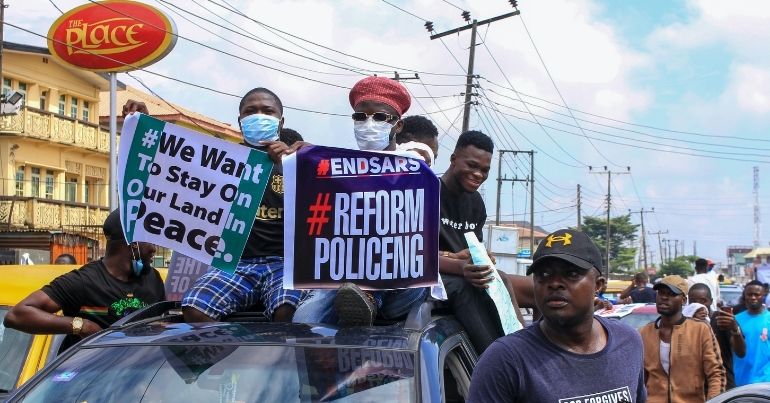 Nigeria’s notorious Special Anti-Robbery Squad (SARS) was officially disbanded on 11 October. The Nigerian government pledged to investigate acts of police brutality and human rights violations. But state-sanctioned violence continues. Youth-led protests against police brutality and impunity have been taking place across Nigeria and beyond since 8 October.

On 20 October, national police chief Mohammed Adamu ordered the deployment of riot police, and imposed an indefinite 24-hour curfew in Lagos and other urban centres across Nigeria.

That evening, the Nigerian army opened fire on a crowd of peaceful protesters at Lekki toll gate, Lagos, according to Amnesty International. The human rights group stated that they received “credible but disturbing evidence of excessive use of force occasioning deaths of protesters.” According to Amnesty and eyewitnesses, at least 12 protesters were killed, and hundreds were injured during protests in Lekki and Alausa in Lagos. The Nigerian army has denied deploying soldiers to shoot at protestors.

Eyewitnesses report that prior to the shootings, government officials removed CCTV cameras and cut electricity at Lekki toll gate. In his statement, Lagos governor Babajide Sanwo-Olu refers to the tragedy as an “unfortunate shooting incident”. He denies any prior knowledge that the shootings would take place. President Muhammadu Buhari is due to address the nation on 22 October at 7pm, 48 hours after the tragedy took place.

"The event that happened at 7PM came as a total shock to me and those around me. The instructions were that the police shouldn't be out until 10/11 PM. I can't explain who gave orders to the military." –@JideSanwoOlu on the military's intervention on #BlackTuesday. #EndSARS pic.twitter.com/9AEqXexWdc

Protesters, journalists, and organisations took to social media and shared videos of peaceful protestors singing Nigeria’s national anthem with the sound of gunshots in the background. And an image of the Nigerian flag covered with blood has now gone viral. The tragedy is being referred to as the ‘Lekki genocide’ across social media.

For the social media influencers that agree to get paid to lie and protect the government, may joy be taken from your personal lives. May you never know peace. May failure be your portion constantly. May your lives be miserable. #LekkiGenocide #endsars #ENDBADGOVERNANCE pic.twitter.com/CNVYrTKoAV

Outrage and condemnation from the international community is growing. UN secretary-general António Guterres has called for an end to police brutality in Nigeria, while UN high commissioner for human rights Michelle Bachelet has acknowledged that “root and branch” reform of the security sector is necessary.

Prominent figures including US presidential candidate Joe Biden, UK foreign secretary Dominic Raab and the archbishop of Canterbury have urged Nigeria’s government to end the brutality, and a Change.org petition is circulating for the president to be charged before the International Criminal Court for crimes against humanity. Celebrities, including Beyonce, Rihanna, and Anthony Joshua have sent messages of support for the movement.

Protests demanding accountability and structural reform have continued across Nigeria, South Africa, the UK, the US and beyond.