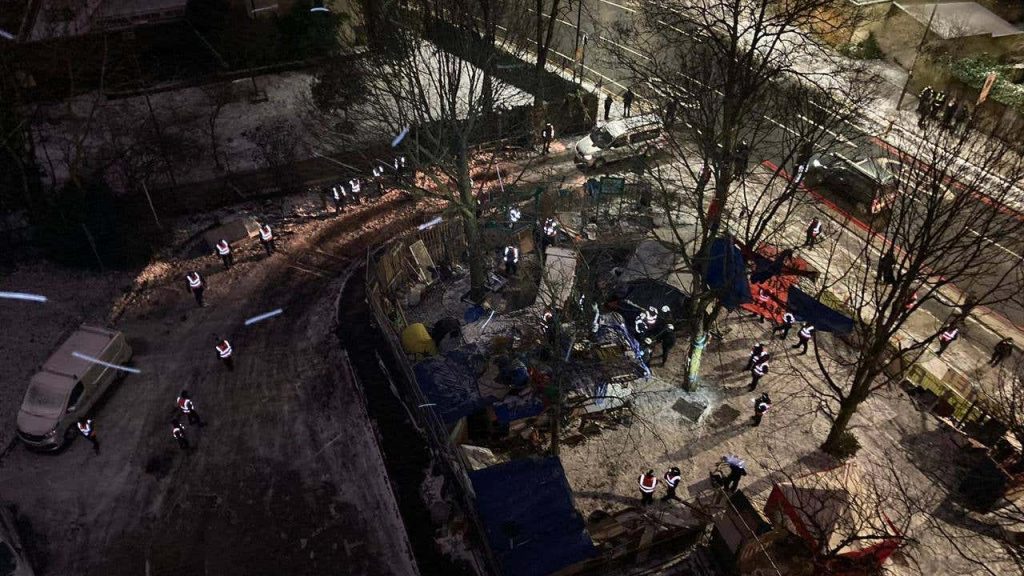 A new tunnel has been occupied by climate protesters opposing plans by a London council to cut down trees to make way for new housing.

Police and bailiffs are trying to evict activists from the site, which is home to six mature trees and near a busy roundabout on Highbury Corner.

Protesters at Highbury Corner Protection Camp said: “At 5am, bailiffs acting under instructions from Islington Council entered the ‘little forest’ of seven mature trees at Dixon Clark Court on Highbury Corner and discovered the tunnel.

“Just as at Euston, the entrance was cunningly concealed within a pallet stronghold, fortified with earth from the tunnel itself.”

Activists have been living on the site for almost four months to try to save the trees, which were due to be felled in favour of a six-storey block of housing.

“It is in an area of major traffic congestion and air pollution, in the most densely populated London borough with the least green space per head outside of the City,” the climate group said.

Maria, one of the protesters in the tunnel said: “Our governments, local and national, are out of touch and not representing the people. They declare a climate and environment emergency and then carry on destroying trees and countryside. It’s got to stop.”

He said: “At the same time, the project will deliver 63 new trees, an extra 100 square metres of communal garden space for residents, and a number of plantings and landscaping improvements designed to improve biodiversity and address air quality issues.

“The council has done everything we can to avoid taking legal and enforcement action and had reached an agreement with XR, the initial group of protesters, that they would leave the site voluntarily and the council would use the money we would have spent on legal fees on even more trees – in addition to the 63 we had already planned to replace the six being felled.

“We have given protesters who chose to remain every opportunity to comply with the directions of the court, including additional time. It’s truly disheartening that people who claim to care about both trees and homes have forced an outcome resulting in fewer trees for the borough, significant costs, and further delays to building much-need council homes for local families in desperate need.”

Protesters said the tunnel at Highbury Corner was not part of the campaign to stop HS2, but had been built by the same people, and shares features with the tunnel at Euston Square Gardens.

An extensive 100ft tunnel has been built in front of Euston station, in protest at the work on the high-speed rail link.

HS2 Rebellion has called on the Government to scrap the “expensive, unpopular and destructive” railway scheme and claims plans will see Euston Square Gardens built over with a temporary taxi rank before being sold to developers.