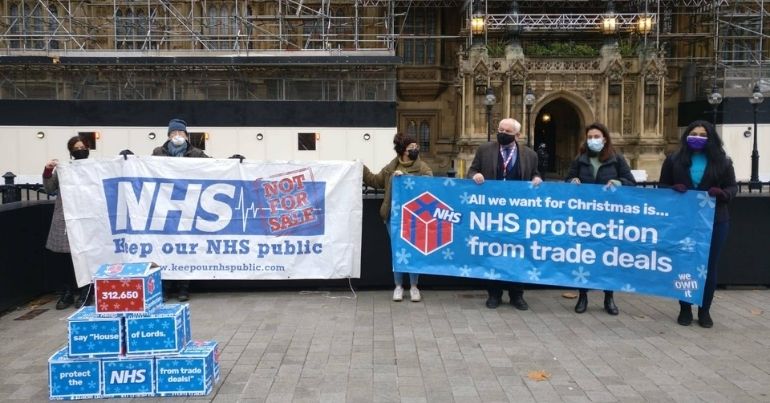 A campaign group has criticised the government’s commitment to protecting the NHS in trade deals, as a controversial trade bill returns to the House of Commons.

We Own It said the government’s proposed protection for the NHS would not be enough, calling for full public ownership.

This comes as the Trade Bill, which has faced repeated criticisms for leaving the NHS open to privatisation, returned to the Commons on 9 February.

We Own It campaigns officer Johnbosco Nwogbo said:

The government’s amendment falls well short of what is needed, and frankly it isn’t worth the paper it’s written on.

Our NHS is already suffering under years of privatisation – with as much as 26% of the NHS budget being spent on the private and independent sector. So maintaining publicly funded healthcare services won’t stop the private healthcare sector in the USA or any other country getting their hands on huge chunks of our precious health service. What’s needed is to ensure the NHS remains publicly funded, but also that it remains publicly owned – and for protections on ownership to be written into the legislation.

After We Own It petitioned the House of Lords, peers voted to amend the Trade Bill in December so it would ban any trade deal undermining the NHS. We Own It supported this proposed amendment, and encouraged MPs to vote for it.

However, the government have now introduced a separate amendment in place of the Lords one. It states that future trade deals “must be consistent with maintaining UK publicly-funded clinical healthcare services”.

We Own it said this amendment only ensures public funding of the NHS, instead of full public ownership. The group also said “clinical healthcare services” does not cover the NHS as a whole.

If the government was serious about protecting the NHS it would do the right thing and put in place proper and full safeguards for the health service in any future trade agreements, and write those safeguards into law. That’s the only way we’ll take our NHS off the table. Hundreds of thousands of people have campaigned for this – it’s time for the government to make it a reality.

The Trade Bill, first read out in the Commons in March 2020, outlines rules for the implementation of international trade agreements.

The amendment made by the Lords held that no international trade agreement could be made that  “undermines or restricts” the ability of an authority:

A history of privatisation

Analysis in 2019 found that NHS contracts worth £15bn had been given to private companies since 2015.

According to David Wrigley, deputy chair of the British Medical Association council, coronavirus (Covid-19) has only added to years of increasing NHS privatisation.

Urgent action is required to protect the NHS and ensure taxpayer money is spent in a responsible manner. In the long term the health service must be protected and returned to being a genuinely publicly funded, publicly provided and publicly accountable system.

Featured image via We Own It – with permission