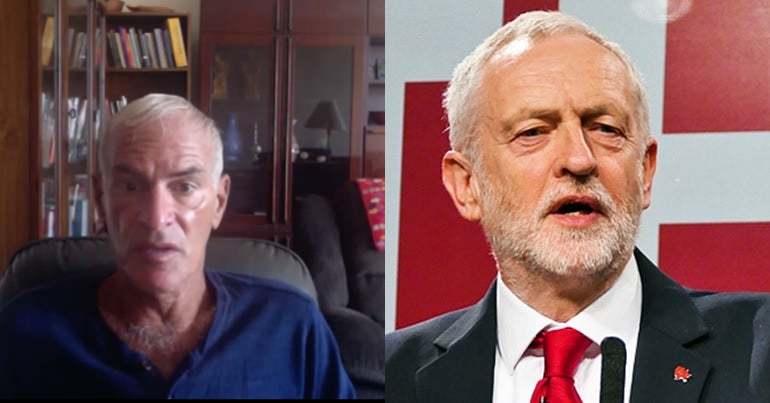 Jeremy Corbyn’s opponents have long used antisemitism allegations as a political football to attack the Labour leader. But now, renowned Jewish scholar Norman Finkelstein has demolished the smear campaign’s arguments in an exclusive interview with The Canary.

Finkelstein, who is the son of Holocaust survivors, began by explaining how smear campaigns based on bogus accusations of antisemitism have a long history. Israeli governments – as well as organisations acting under their command – have periodically used such smears to deflect criticism of the state’s policies:

Historically, Finkelstein explained, these campaigns “used to be pretty much confined to the Jewish organisations defending Israel, acting essentially as agents of a foreign government”.

Since Jeremy Corbyn – a consistent critic of Israeli crimes against Palestinians – became leader of the Labour Party, however, there has been a “unique” dynamic at play. As Finkelstein stressed:

The British elites suddenly discovered ‘we can use the antisemitism card in order to try to stifle genuine… leftist insurgencies among the population’. And so what used to be a kind of sectarian issue waged by Jewish organisations faithful to the party line emanating from Israel vs critics of Israel, now it’s no longer sectarian because the whole British elite has decided they’re going to use this antisemitism card to stop Jeremy Corbyn and the political insurgency he represents.

Finkelstein went on to discuss the damage that this has caused to the movement behind Corbyn and its attempt to change British society:

The problem is, even when you win, you lose. What do I mean by that? Because even if [scholars who specialise on the topic] can prove everything is a lie, first of all, there’s always the assumption ‘where there’s smoke, there must be fire’… But that’s not the bigger problem. The bigger problem is, it’s sucking so much energy from the Jeremy Corbyn campaign that he can’t talk about his platform. He has no time anymore to talk about his platform. All the headlines are about the antisemitism [issue].

“It’s a political agenda. It has nothing whatever to do with antisemitism.”

Finkelstein was also scathing about how Corbyn and those surrounding him have dealt with the smear campaign. He said:

He committed two fatal errors… based on a completely groundless assumption. The assumption was that there was a rational basis to these complaints…

Number 1, [Labour] adopted this completely idiotic International Holocaust Remembrance Association [IHRA] definition of antisemitism, which was clearly just designed to stifle criticism of Israel. That was a fatal mistake. I said from the Day One: ‘this is a disaster once you adopt that, because now it’s going to be used as it is now being used, to purge everybody who says anything… critical of Israel.’ The second fatal mistake was not to end the discussion. They could simply have said: ‘We don’t think this campaign is being waged in good faith. There is another agenda. It’s a political agenda. It has nothing whatever to do with antisemitism. However, we recognise that our party, like any party, is going to have some people who probably don’t belong there.’

In addition to these two issues, he pointed to an even graver blunder, insisting that:

The major error, which has been a complete and total disaster, has been the abdication by the Labour Party of the radical tradition – but also liberal tradition – which asserts the absolute value of liberty of speech…

The Labour Party, in the midst of this hysteria, has completely, totally, catastrophically abandoned that tradition and has turned into a thought police – expelling members for incorrect thoughts and trawling the web for any hint of a thought that might be politically awry.

How to defeat the smear campaign and move forwards

Finkelstein finally identified three strategies that he thinks Corbyn and his team should use to counter the smear campaign moving forward. He said:

There are three things.

Number one, there should be a small group of competent people… who will just answer the claims… It cannot consume the already limited resources of the Labour Party…

Number two: say ‘it’s over; we’re not answering as a party any longer any of these charges… The farce is finished.’…

And number three, in my opinion the most important, you have to revitalise, resurrect that tradition of free speech, and to tell your members ‘don’t be afraid to speak in our party’.

Featured image via the author and Sophie Brown