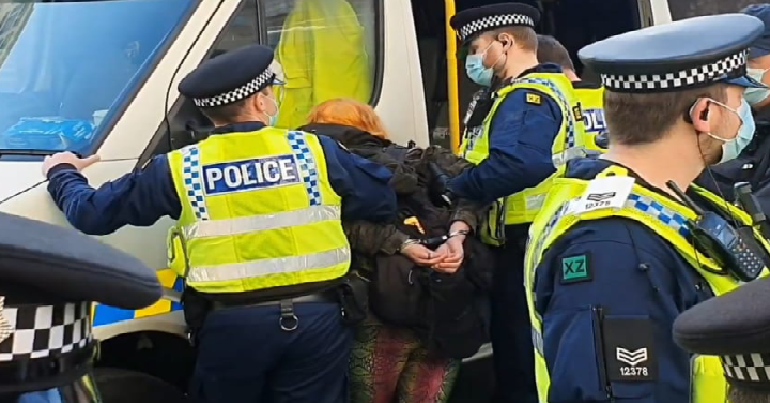 Content warning – this article contains a description of police violence

Shocking footage from Manchester’s Kill the Bill demonstration on 3 April shows police officers slamming a woman’s head into a police van and then folding her body in half to restrain her as she shouts for help.

This violence was used as Samantha was arrested for a minor public order offence. She was later issued with a £90 fixed penalty notice.

A statement seen by The Canary says that the force used to push Samantha into the side of the vehicle broke the van’s wing-mirror.

The incident occurred after Samantha’s partner Dave was grabbed by police officers towards the end of the demonstration against the police bill on Saturday 3 April. Police had mistaken Dave for somebody else.

A statement written by Dave describes how he was “dragged” to a van. A YouTube video shows Dave’s arrest:

A statement from Greater Manchester Police confirms that Dave was mistaken for someone else, and claims that he ‘refused to engage’ with officers. The statement reads:

He was arrested when officers had to take action because he had refused to engage with the police to confirm who he was. He was de-arrested as soon as we had enough further information about his identity to de-arrest him

However, Samantha told The Canary that police officers refused to look at Dave’s ID to confirm his identity.

After Dave was dragged off, Samantha tried to ask the police what was going on.

A video of what ensued shows that one officer’s response was to tell Samantha to “shut up”. One of the other protesters on the scene can be heard calling the officer’s behaviour “misogyny”.

Samantha’s statement describes what happened when she approached officers to ask about Dave’s arrest:

Due to my shock I was swearing, but standing still. I was asking what was going on, why could they not take his cuffs off, and occasionally using the F word mid-sentence. Suddenly, I was jumped on by a number of officers and told I was under arrest. At this point, I went into a PTSD [Post Traumatic Stress Disorder] flashback

then my head was smashed into the van wing-mirror with such force that it was folded back against the van, and I saw bits of black plastic coming off it. I later heard that were was glass on the floor below me. I briefly blacked out at this point, my legs gave way, and I wet myself. I had been pushed and pulled between officers who were mostly male and a lot larger than me. I was shouting to police to stop as I have PTSD. I then remember being on the floor shouting for help as officers violently cuffed me, pulled me back up and held me against the van.

While Samantha was pinned against the van and shouting for help, officers could be seen bending her body double. Samantha’s statement reads:

I was bent over almost double for a while, with their hands pressing my head down. I went into a severe panic attack and could not stop crying and shaking.

A statement from Greater Manchester Police claims that:

Officers were met with a high degree of hostility from a minority of people and our preference would always be that protesters dispersed peacefully.

However, the video clearly shows that the hostility and violence was coming from the police. The video shows the protesters chanting “all coppers are bastards” after the police grab Dave and violently drag him to the van, and after Samantha’s head is slammed against the vehicle. But are Greater Manchester police really all that surprised at this public ‘hostility’ to their actions?

The Canary contacted Greater Manchester Police and asked them if they wanted to make a further comment after watching the footage. We had not received a reply by the time of publication.

Injuries caused by the police

Both Dave and Samantha received treatment at hospital for the injuries they sustained during the arrest. Samantha’s statement reads:

I have swollen and bruised hands, forearms and upper arms, scuffed knees, shoulder, back and leg pain, and minor nerve damage in my thumb and wrist (recorded and confirmed by hospital doctor).

I sustained minor wounding to the back of my left hand during cuffing and being manhandled, red marks on both wrists where the cuffs had dug in. My lower back on the right hand side is in intense pain after the handling by police officers, which I believe was caused by the twisting and dragging being affected upon me while I was unable to move my own body freely.

“If this bill goes through they’ll have free rein”

Samantha told The Canary that police violence like this will only get worse if the police bill is passed:

I’ve been an environmental activist since 2014 and I’ve seen a lot of police violence, especially from the Greater Manchester Police.

If they are given more powers it’ll get even worse. If this bill goes through they’ll have free rein.

The proposed policing bill is arguably the biggest attack on our freedoms since the Public Order Acts of the ‘80s and ‘90s. The controversial bill passed its second reading in parliament during March. The bill will – if passed – give the police unprecedented draconian powers to arrest protesters, and will criminalise trespass, effectively outlawing the livelihoods of the UK’s Gypsy, Roma and Traveller (GRT) communities.

The violence felt by those involved in the growing movement against the bill is just another wake up call that we need to talk about police violence. Not only violence against protesters, but the daily violence faced by communities at the hands of the police. This police brutality is felt most acutely by People of Colour and working class communities. We need to stand in solidarity with all those on the receiving end of police violence, and envision a radically different future where we can abolish the violence of the police force and the prison system.