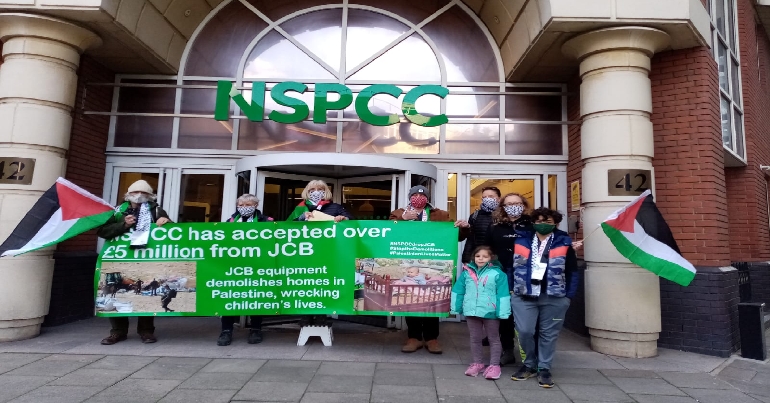 This article was updated on 7 April at 17:15 to add a new comment from the NSPCC

Campaigners are calling on the National Society for the Prevention of Cruelty to Children (NSPCC) to stop accepting money from British construction company JCB.

JCB manufactures bulldozers used by the Israeli army to demolish Palestinian homes. The company is currently being investigated by a UK government body over whether it’s in breach of human rights guidelines.

Demolitions of Palestinian homes and property are part of the Israeli state’s colonisation policy in Palestine, and are illegal under international law.

New research by Shoal Collective shows that at least 160 children were made homeless by demolitions carried out by Israeli forces using JCB equipment during 2020. The research also found that JCB bulldozers were used to displace at least 278 people in total last year. JCB machinery was also used to destroy a Palestinian graveyard and to demolish a staircase leading to Jerusalem’s Al-Aqsa mosque, the third most holy site in the world for Muslims. Finally, JCB bulldozers were used in the demolition of the Bedouin village of Khirbet al-Humsa, reportedly Israel’s largest demolition in the West Bank for a decade. The village has since been bulldozed a further three times.

The Canary contacted JCB and asked if the company wanted to comment on the new research carried out by Shoal Collective. We had not received a reply at the time of publication.

On Tuesday 6 April, campaigners handed in a petition of 1,800 signatures to NSPCC’s offices in London calling on the charity to sever ties with JCB. Children’s charity NSPCC has accepted at least £5m from JCB over the years.

According to Ann Wright, one of the campaigners:

The NSPCC was founded to prevent cruelty to children but it takes money from JCB which derives profits from inflicting cruelty on Palestinian children – it doesn’t make sense.

Wright explained that JCB sells its bulldozers to Comasco, an Israeli company that supplies JCB equipment to the Israeli military and Israeli Civil Administration. Wright continued:

The bulldozers have demolished houses and tents, clinics and schools and have ripped up hundreds of thousands of fruit trees in the occupied Palestinian territories.

“Shouldn’t NSPCC try to stop this”

We think the NSPCC should sever its link with JCB. Imagine if your house was demolished and all your safety and belongings are destroyed too, shouldn’t NSPCC try to stop this?

These little ones are traumatised by watching their homes bulldozed while their parents look on helplessly.

A spokesperson for the NSPCC told The Canary:

JCB employees, their family and friends play an important role in supporting our local work in Staffordshire. They have raised money for our therapeutic services in Stoke on Trent, which has helped many children rebuild their lives after sexual abuse.

We take all concerns about donations seriously, especially when the wellbeing of children is involved, and have looked carefully and closely at this issue.  We have concluded that JCB cannot be held responsible for what happens to equipment once it has been legally sold and resold.

Above all, as our guidance demands, we ask ourselves if a donation is in the best interests of the charity and at our last review, we decided it was.

A campaign that is building momentum

The handing in of the petition followed a national day of action in March aimed at pressuring NSPCC to stop accepting JCB’s donations. During the March day of action, almost 10,000 letters were sent to the charity and the speakers and facilitators of NSPCC’s national conference were contacted, flagging up campaigners’ concerns about its relationship with JCB. Demonstrations against JCB were also organised in several cities. 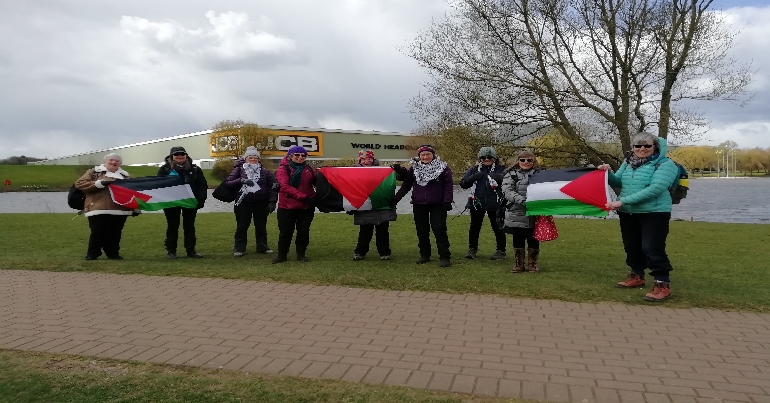 Meanwhile, people demonstrated outside JCB’s World Logistics Headquarters in Rocester in the West Midlands on the same day. A press release from the group reads:

The campaigners are protesting about the repeated use of JCB bulldozers used by the Israeli military to demolish Palestinian homes and communities. The group carried photographs graphically illustrating the devastation and trauma caused and read out testimony from Palestinian families whose homes and schools have been destroyed using JCB equipment.

JCB and its owners, the Bamford family, have been repeatedly called upon to cease all trade with Israel. JCB stands accused of support for the war crimes carried out by the Israeli state in its illegal occupation of Palestinian land, including its cruel policy of home demolitions. For years the Bamford family have ignored all evidence of JCB equipment being used by the Israeli military and all calls for exports to Israel to cease. 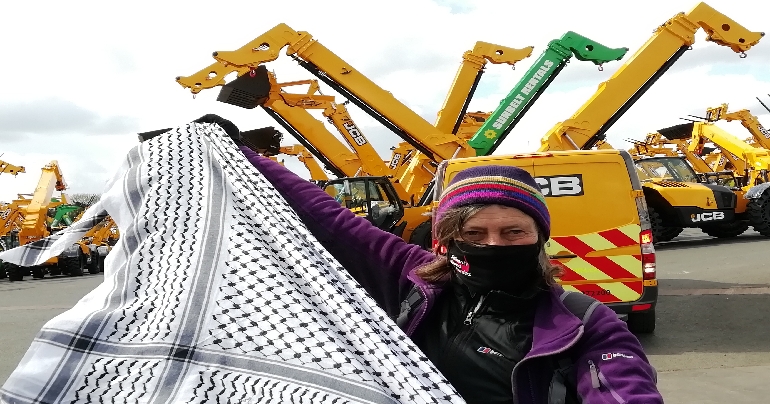 Natalie Philips, one of the protesters at the World Logistics HQ, sent a strong message to the owners of JCB:

JCB is a highly profitable, global company. It could cease trade with its Israeli dealership with scarcely a dint in its profits. Yet it chooses not to. It chooses shamefully to ignore the trauma inflicted on hundreds of Palestinian children. The Bamford family hypocritically pride themselves on their supposed support for children’s welfare, most publicly through their financial support for the NSPCC. The most powerful step they could take to transform the lives of thousands of children would be to end their association with Israel’s brutal home demolition policy, and to call on other companies to do the same.

Both of these demonstrations show the strength of the growing campaign against JCB’s complicity in Israel’s colonisation of Palestine. Its high time for the NSPCC to pay attention, and to sever links with this toxic company that does so much damage to Palestinian children.