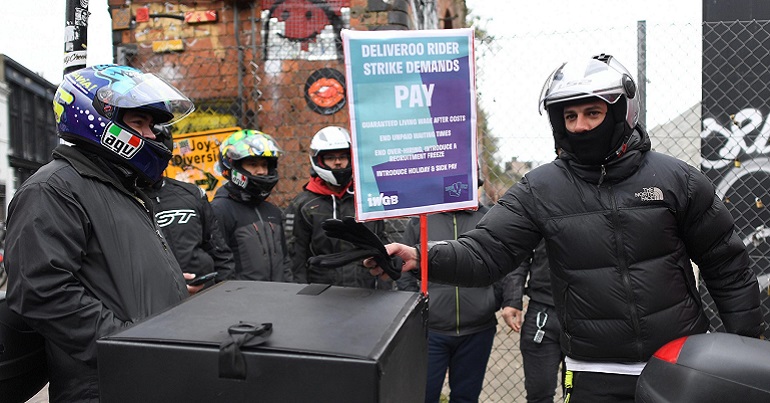 Deliveroo workers have gone on strike, just as the company joined the stock market. It was, of course, a game of two halves: workers fighting for rights; fat cat investors attempting to make a killing.

Everybody out… on your bikes

Deliveroo workers held protests in cities across the UK: from London, York and Sheffield via Reading and Wolverhampton. The Independent Workers’ Union of Great Britain (IWGB) is repping the Deliveroo workers. It noted a report which stated:

major health and safety concerns including but not limited to poor COVID-19 protections. It also highlights pay well below minimum wage, with many riders earning as little as £2 per hour and points to the rise in litigation and industrial action against the company.

So, on 7 April Deliveroo workers made some noise.

There was a sizeable demo in London:

Riders across the country are demanding workers rights, safety at work, and an end to poverty pay.#rights4riders#takenforaride@NadiaWhittomeMP @IanByrneMP @PeoplesMomentum pic.twitter.com/c2ew3cnnwP

Share this so it can be remembered how companies like Deliveroo make money through the exploitation of their workers. I hope their stock market flotation sinks. 😉 pic.twitter.com/saolEvDTXw

Solidarity to the riders out on strike with the @IWGBunion on @Deliveroo's first day of public trading.

With some earning less than minimum wage, they're demanding better pay, rights & safety.

Deliveroo riders are workers and should have full employment rights #Rights4Riders

Solidarity with Deliveroo riders striking for better workers rights and an end to the pay which drives them into foodbanks.#rights4riders @IWGBunion https://t.co/2SmXSoiXNb

And people were also urging the public not to order from Deliveroo on 7 April:

COOK YOUR DINNER TONIGHT 🍝🥦🍜
And don't cross the picket line ❌
Because Deliveroo workers are on strike! 💥

ACORN stands with @RidersRooVolt and @IWGB_CLB as they fight for a living wage and humane conditions.
Donate to the strike fund if you can: https://t.co/vWaNMyk9Gb

Deliveroo presents a false choice between flexibility and basic rights but the Uber ruling showed that, here as well as abroad, workers can have both.

That is the least they deserve and what the public expects for our frontline workers.

But so far, Deliveroo itself has been scornful. It’s dismissed workers’ concerns. It called IWGB a “self-appointed union”. And it said that the majority of its workers were “happy”. Of course, it’s of little wonder the company was so barbed about its striking workers. Because its trading on the stock market hasn’t gone according to plan.

That is, the company was open to anyone buying its shares for the first time. Press Association (PA) reported that Deliveroo saw shares increase by more than 3% to 290p in early trading on Wednesday, before edging back slightly.

But as PA noted, shares are still around 28% below their launch price of 390p per share, which would have valued the business at £7.6bn. As of midday on Wednesday, the company had a market value of around £5.3bn.

PA said that leading fund managers largely said that the primary cause of their caution was its shareholder structure, which will give significant power to its founder Will Shu in shareholder votes.

Surprise, surprise. Who cares about workers’ rights when there’s money to be made? But it doesn’t have to be this way. As IWGB said:

The company’s main competitor Just Eat already declared its intention to abandon the gig economy model of ‘bogus self-employment.’ Other courier corporations [like Uber] have been compelled to do so by courts in the UK and victories against Deliveroo are being won in courts abroad.

So, will Deliveroo back down? Or is the power of the shareholders too strong? Given its less-than inspiring stock market performance, Deliveroo may well make changes to how it operates in a bid to earn more money. But don’t immediately expect workers’ rights to be part of this.