The DWP policy that is nothing short of eugenics - The Canary

We can now properly analyse the effect of a four-year-old Department for Work and Pensions (DWP) policy. It’s caused poverty to increase. And the policy may also have caused an increase in abortions. But exclusive research by The Canary has also found birth rates among the poorest women have dramatically fallen; potentially also due to the policy. Yet so far, the DWP maintains that there isn’t a problem.

The two-child limit is a DWP policy. The then Tory government brought it in on 6 April 2017. It meant the DWP would only pay Child Tax Credit and Universal Credit for two children in a family; any more than this the DWP would not count in benefits calculations.

The policy has been controversial. A court ruled in June 2017 that the policy was “discriminatory” against single mothers with children under two. Then, in April 2018, another court said the cap was unlawful. This was in relation to young carers. The so-called ‘rape clause‘, where women have to prove they’ve been raped to get an exception to the two-child limit, also sparked outrage.

Now, four years on, the long-term effects of the two-child limit are clear. 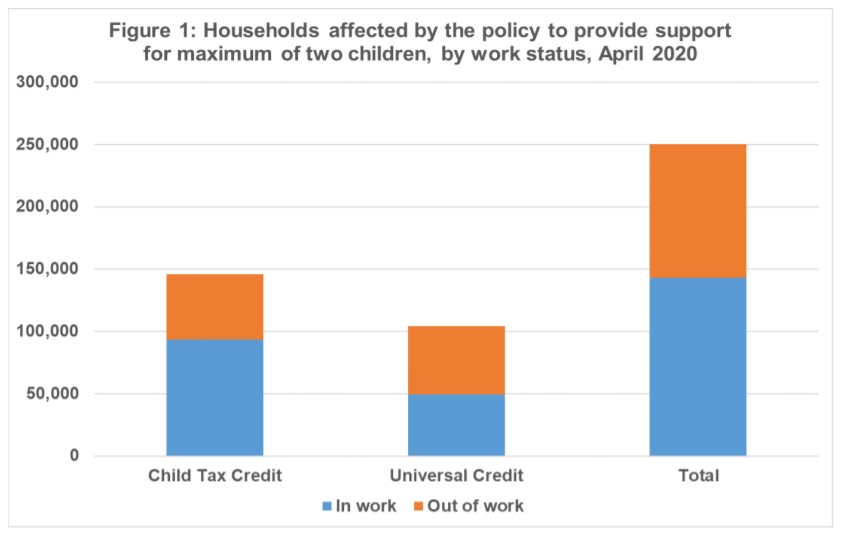 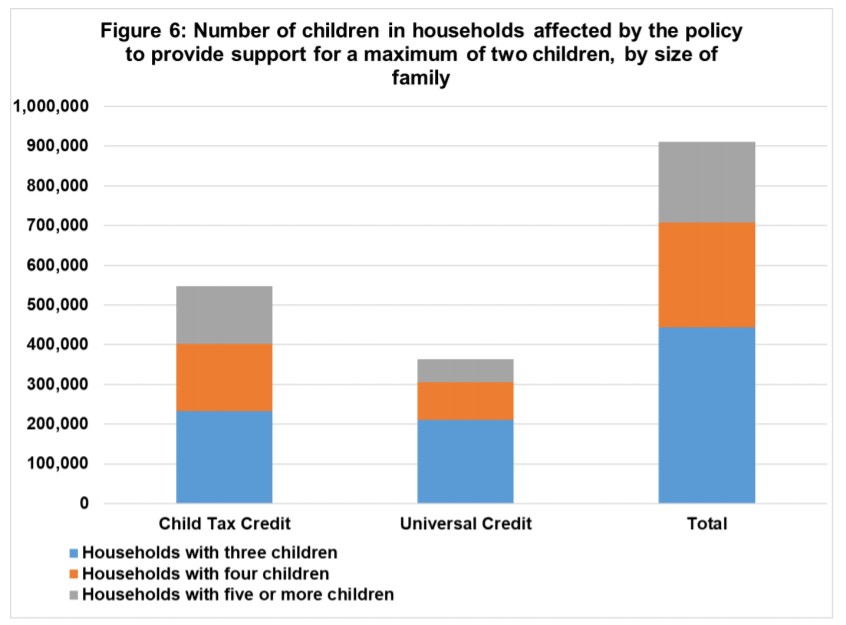 Meanwhile, the DWP has effectively cut over £5bn from people’s social security with the policy. And the real-world impact is very concerning.

According to the Joseph Rowntree Foundation (JRF) data on poverty, there has been a four percentage point increase in the number of households below average income where three or more children live; up four percentage points from 43% to 47%. That’s nearly a 10% increase:

estimates suggest that by the end of this Parliament, more than 600,000 families are likely to be subject to the limit, pushing an estimated 1.3 million children into, or deeper into, poverty.

The CPAG also looked at abortions.

It found that there was a “sharp” overall increase after 2017: 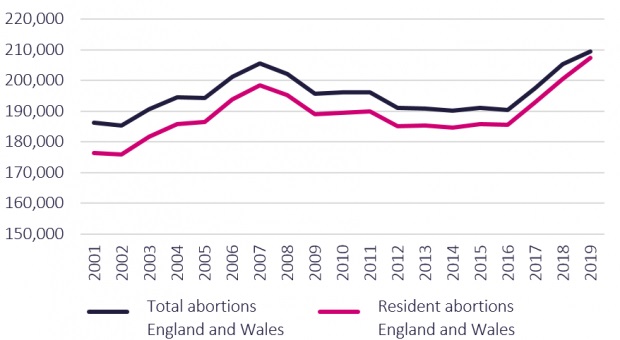 But crucially the CPAG said that abortion rates for women who already had two or more children increased “most rapidly” after 2017: 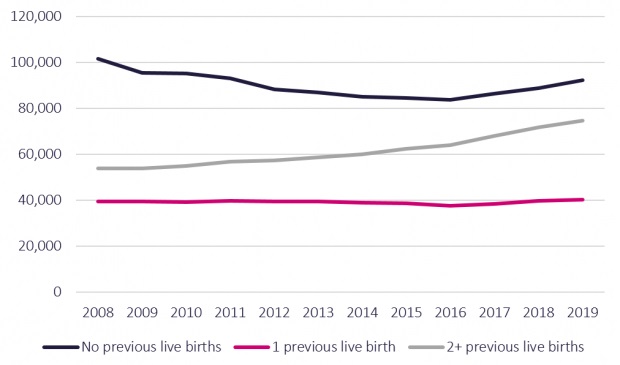 The Canary analysed the birth rates for women by socioeconomic status; that is for the richest and poorest women.

Poor people: not having kids

Our research found that birth rates fell generally. This was comparing 2017 and 2019 figures. The biggest falls have been among the poorest households. In the table below, 1.1 is the richest, 8 is the poorest:

We cannot directly say that the falls are due to the two-child limit. But given the effect of the policy on abortion and poverty rates – this additional impact is likely. Moreover, the reduction in birth rates in the poorest groups is sudden.

As The Canary previously reported, between 2013 and 2016 birth rates in groups 5-8 fell overall by 0.9%. Now, between 2017 and 2019 this accelerated to a 12.4% fall. But this drop also correlated with the 11.74% increase in abortions. Because the poorest women are having abortions at over twice the rate of the richest: 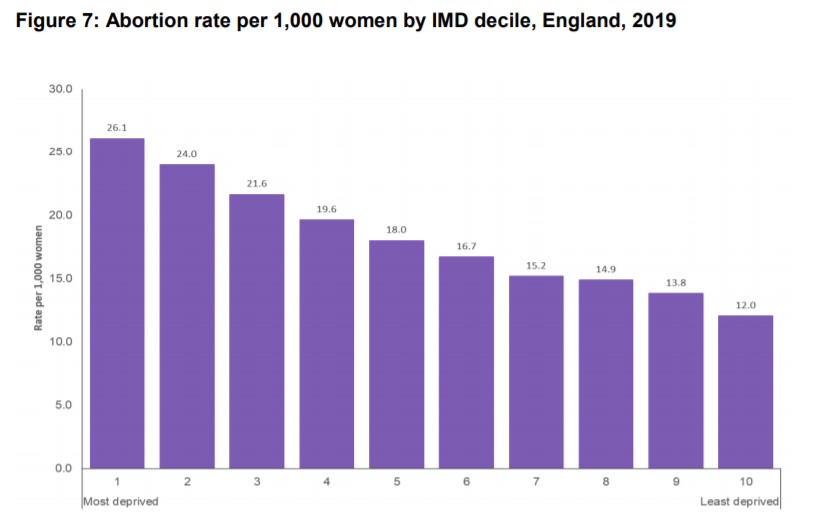 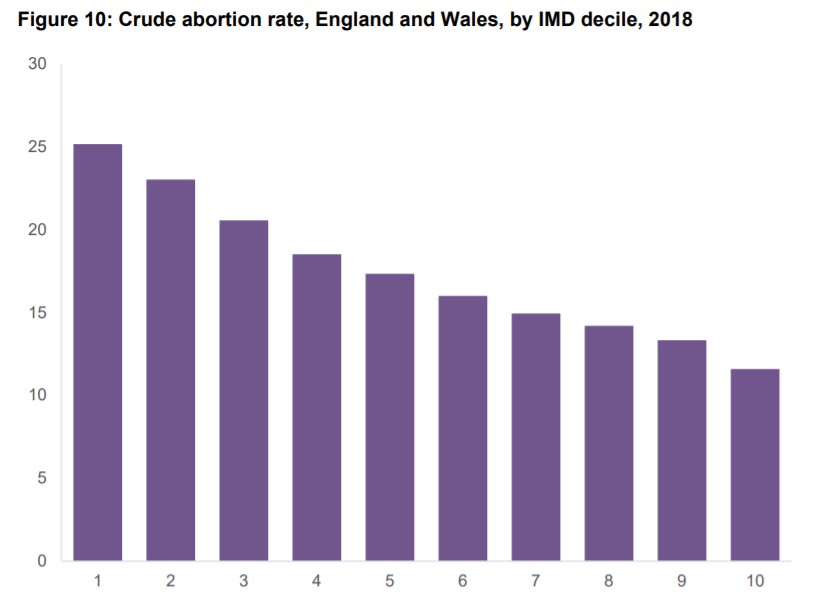 The Canary asked the DWP for comment. A spokesperson told us:

Universal Credit has provided a vital safety net for six million people during the coronavirus pandemic and is supporting people back into work through our comprehensive Plan for Jobs.

In 2020, 85% of all households had two or fewer children, which is reflected in our policy. There are appropriate exemptions in place.

But the DWP’s own research shows that these exemptions are tiny. In April 2018, the number of households with three or more kids the DWP gave an exemption from the limit to was just over 2,800. By April 2020, the number was around 12,500; an average of 4.75% of households hit by the policy across the UK. This is actually a reduction on 2018, where the percentage was around 8% of the total households having an exemption.

The two-child limit has been perhaps the Tories’ most noxious policy. It’s hard not to look at it and think that the DWP and government intentionally designed it to stop poor people having children. Because as the CPAG noted:

If these findings are related to the two-child policy, it is horrifying. China’s one-child policy was driven by burgeoning birth rates. We have sub-replacement fertility. There is no other country in history that has adapted social security policy to increase child poverty to reduce fertility or encourage abortion. It is a completely outrageous assault on liberty.

The word for this would be eugenics. And successive Tory governments and the DWP have meted it out, without recourse.