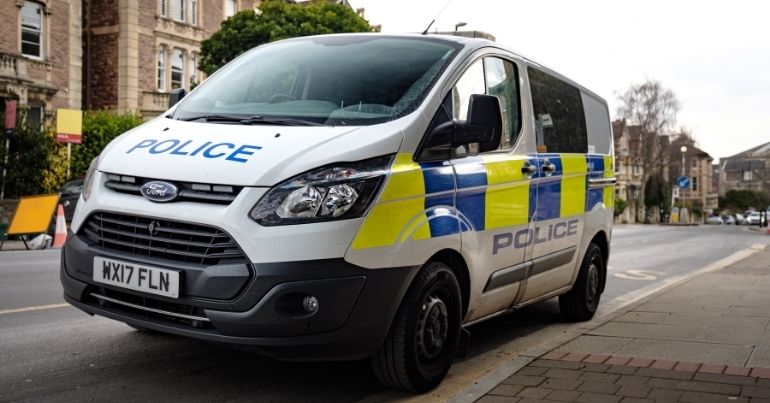 A Bristol resident has told The Canary about experiencing two years of racial harassment from her neighbours. She alleges that in spite of video and photographic evidence of the abuse local agencies, including Avon and Somerset Police and Bristol City Council, have treated her and her partner with contempt, and have taken little action to support them as the victims of a race hate crime.

The Bristolian told The Canary about suffering two years of racial harassment and intimidation from her neighbours, including mocking her, placing objects with subliminally racist messages outside their house, and making monkey noises at her. She is a mixed-race woman who’s experienced racist abuse in the past. She lives in Brislington, a predominantly white suburb of Bristol with a history of race hate crimes and attacks.

According to the Brislington resident, her garden has become a “no-go area”. Sharing her experience of feeling unsafe in her own home, she told The Canary:

I just keep the doors and windows shut all summer.

Regarding Avon and Somerset Constabulary’s treatment of the case, the Brislington resident told The Canary about the “appalling”, “aggressive”, “arrogant”, and “totally biased” attitude of Broadbury Road police officers who attended the scene. On a number of occasions, she heard officers “laughing and joking” with her racist tormentors next door. She alleges that another officer told the victim that her racist aggressors are “great people”. In an email to Bristol City Council, inspector Paul Bolton-Jones dismissed the severity of her allegations, explaining that with the “exception [of] the allegation of the monkey noises”, the case is a straightforward neighbour dispute.

A spokesperson from Bristol Copwatch told The Canary:

In some cases, white officers attending the scene seemed to either side with the racist abusers, or were actively defensive when issues of race were raised.

If making monkey noises at someone doesn’t qualify as racial harassment, what does in the eyes of Avon and Somerset police? The officers at Broadbury road police station are comprehensively failing to support someone who has come forward to complain that they are being racially harassed.

Regarding her racial harassment, the Brislington resident told The Canary:

Before this I had total faith in the police. … I never realised how openly biased they are.

Stand Against Racism and Inequality (SARI) has been working with the Brislington resident since April 2020. They have pushed for a coordinated response to the allegations of racially motived harassment. However, as exemplified by the alleged unsupportive police response, this has been unsuccessful.

Although SARI sent the neighbour’s letting agents D W Smith & Co letters explaining that their client is “at high risk of being racially abused again”, they have not acted to deescalate the situation. The Brislington resident contacted Bristol City Council “out of sheer desperation” but says she received a “cold” response.

A spokesperson from SARI told The Canary:

This has been a long and protracted case and has been very difficult to resolve. So many of the incidents [SARI’s client] has reported are underhand and can be seen as micro-aggressions. We say such abuse can be like death by a thousand cuts as it chips away at people gradually ruining their life.

Mediate, move, or put up with it

SARI, Avon and Somerset Police, and Bristol City Council have told the Brislington resident that they are not able to resolve the situation as it stands. Rather than taking decisive action, these agencies offered the victim “two options” – to mediate with her racist aggressors or to move home. The Brislington resident told The Canary that this felt like each agency placed the onus on her to resolve her neighbours’ abusive behaviour. She added that the responses she received from these agencies made her feel like “a problem” for not wanting to move home or mediate with her racist aggressors. She explained:

I had a Zoom meeting with SARI, the council and the police. And they told me that if these men were kicking a football around the street it would be classed as anti-social behaviour. But making monkey noises… in their own home, that’s not.

Insisting that they “would never penalise clients who choose not to go for this option”, a spokesperson from SARI told The Canary:

It is very hard to take criminal or civil action when people make noises or say things inside their home. You must prove their intent to target. Ultimately, however, we know that the situation has led to our client feeling under siege and like a prisoner in her own home. Such cases can take a long time to tackle effectively as intention is hard to prove and evidence.

whilst mediation can be a good way forward with neighbour based cases – we appreciate that victims of hate crime often don’t feel safe to mediate with their abuser.

In a joint statement, Avon and Somerset Police and Bristol City Council said:

These cases are often complex and sufficient evidence for prosecution or other enforcement action can be difficult to gather.

When we don’t have the evidence for enforcement action, dialogue through mediation is often the most important tool we have to establish the facts and find solutions, whilst continuing to record and investigate any further reported incidents.

Expressing her dismay at the lack of policies in place to deal with cases like hers, the Brislington resident told The Canary:

Bristol City Council needs to be exposed for its lack of race relations policies. They’ve got Black Lives Matter on their website. It’s just a logo, Black lives do not matter.

Parallels with the racist murder of Bijan Ibrahimi

A spokesperson from Bristol Copwatch highlighted that this case is particularly concerning given its striking parallels with the events that led up to the brutal murder of Bijan Ebrahimi – another Brislington resident. In 2013, Lee James – Ebrahimi’s neighbour – beat him to death and set his body alight.

In the seven years leading up to Ibrahimi’s murder, Avon and Somerset Police failed to record “at least 40” of the 73 racially motivated incidents he reported. According to the mutli-agency report which was published after Ebrahimi’s death, the police and Bristol City Council treated him like a “problem”, rather than the victim of multiple race hate crimes. Meanwhile SARI only supported him until 2011. The report asserts “that there was a collective failure of both Avon and Somerset Constabulary and Bristol City Council to provide an appropriate and professional service to Bijan Ebrahimi”. As set out in the 1999 MacPherson report, it identifies institutional racism as:

The collective failure of an organisation to provide an appropriate and professional service to people because of their colour, culture or ethnic origin. It can be seen or detected in processes, attitudes and behaviour which amount to discrimination through unwitting prejudice, ignorance, thoughtlessness and racist stereotyping which disadvantage minority ethnic people.

There is therefore, based on the above definition from The Macpherson Report, evidence of both discriminatory behaviour and institutional racism on the part of Bristol City Council and Avon and Somerset Constabulary.

A spokesperson from SARI told The Canary:

We know Bijan’s case all too well and have supported his family since his murder in 2013. Bijan suffered horrific assaults, threats, malicious allegations and still was not believed as he should have been. We never want that to happen again and that is why we do not close cases even when incidents appear low level and are hard to resolve.

Regarding the multi-agency failures that led up to his murder, Independent Police Complaints Commissioner Jan Williams said:

Bijan Ebrahimi self-identified as a victim of race hate crime, but was never recognised as a repeat victim of abuse who needed help. Instead, his complaints about abusive neighbours were disbelieved and he was considered to be a liar, a nuisance and an attention seeker.

In 2017, Police and Crime Commissioner Sue Mountstevens said that she is “satisfied that the constabulary has recognised the mistakes that were made and put in place wide-reaching changes which are already embedded today”.

Bristol Copwatch is concerned that the police and council are following the “same pattern of behaviour” in dealing with the Brislington resident’s case. A spokesperson set out that neither agencies seem prepared to take action to protect the victim. They added that officers at Broadbury Road station – the same station that failed Ebrahimi – have attempted to actively defend the victim’s racist tormentors. They told The Canary:

Despite conducting reviews and making promises to change, it seems that neither Avon and Somerset Police or Bristol City Council have learnt any lessons after the racist murder of Mr Ebrahimi.

Calling for urgent change, the Brislington resident told The Canary:

there’s going to be a tragedy because people can be crushed up mentally, honestly, the strain of it. Like in Broomhill [where Ebrahimi’s murder took place], or someone doing something to themselves, because the strain is immense.

According to SARI, they currently have “400 active cases […] ranging from bricks through the window, to attacks on children at school to murder”. Bristol has seen a rise in race hate crimes in the wake of Black Lives Matter protests. These include an attacker deliberately driving into a young NHS worker, and the brutal murder of Mikhael Hanid.

In spite of the area’s high incidence of race hate crimes, a 2016 report revealed that Avon and Somerset Police was ranked the worst of Britain’s largest forces at responding to hate crimes. And a 2019 freedom of information request revealed that although individuals have lodged 160 allegations of racism against the force since 2014, only 1% of outcomes were upheld.

In a joint statement, Avon and Somerset Police and Bristol City Council said:

Complaints of racially-aggravated harassment are always taken seriously and we work together to record concerns, investigate and support those affected. Where evidence supports further steps we work together to take enforcement action in line with legislation.

Local organisation Stand Against Racism and Inequality have supported the family during this process and we welcome the opportunity to work with them to find solutions where possible.

We are working with the Council and police as much as we can to ensure the situation is taken seriously. We are also looking at a number of other options that we hope will make a difference.

In the meantime, the Brislington resident’s neighbours’ behaviour is escalating. She lives in fear that local agencies won’t provide sufficient support until it’s too late.