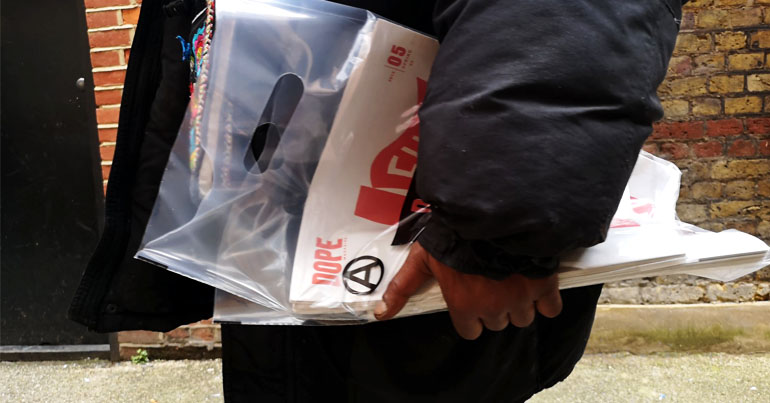 On 11 May, Dog Section Press (DSP) said it had distributed 800 copies of its newspaper DOPE to “homeless vendors around Whitechapel, London” over the past month. So The Canary spoke to DSP about its “experiment in radical publishing solidarity”.

DSP is a London-based publisher and distributor running on a not-for-profit basis. It deals in what the publisher describes as “seditious literature”, focusing on anarchist and radical left ideas. And it carries this ethos through to the texts it puts out, stating that:

We aim to keep our publications as affordable as possible, and we distribute books and pamphlets that are inexpensive; at the same time, we refuse to compromise on quality – because there’s nothing too good for the working class.

Furthermore, all of its books are not only free to read online but also available on a Creative Commons licence for republishing. DSP told The Canary that it did this because:

we don’t believe in intellectual property – though we’re able to do that because we’re much smaller than most of the big radical publishers, and mostly voluntarily run.

DSP’s publications cover a wide range of topics. They include:

The Canary asked the publisher what marked it out from other radical presses in the UK. But DSP quickly pointed out that it has “far more in common” with its peers than differences, and has “comradely relations” with many of them. NO! Against Adult Supremacy and the Great Anarchists series, for example, were co-published with Active Distribution.

Responding to a question about what guides publication choices, DSP said:

We don’t have very strict editorial guidelines and it’s a fairly loose commissioning process. It’s essentially whatever we feel is most interesting and important – and have the resources for – at any given time. We don’t ever put things out because we think they’re going to be marketable or sell well – obviously, we hope they will but that’s never our primary motivation.

Propaganda by the deed

Then there is DOPE, a “quarterly newspaper” that’s, so far, put out five issues. DSP said that it came from a desire to “do something that was more regular”, and:

an opportunity to feature a broad range of political writing. The first issue was put out as something of an experiment but we’re just about to put out Issue 6 – which features Benjamin Zephaniah and Jason Williamson of Sleaford Mods – so it seems to be working. It’s completely independent, there’s no party or member organisation behind it, and we don’t get any funding, so it’s totally reliant on its readers and supporters. It’s still pretty precarious, but it’s definitely moving in the right direction.

Like the rest of DSP’s catalogue, people can read DOPE online for free or buy a physical copy. But DSP has also established a unique distribution method for the newspaper. A percentage of the total copies printed are what DSP calls “solidarity issues”. These are made available for free to vendors, who can then sell them at the cover price of £3. DSP described this as “along the Big Issue model” but more directly inspired by Nervemeter magazine. And it started this because:

We try and be as deeds not words for an organisation whose primary purpose is the publishing of words. So while political education and spreading propaganda is important to us, we also wanted to do something based on tangible solidarity – we’ve tried to make DOPE a direct action, a sort of propaganda-by-the-deed.

There’s no ‘gatekeeping’ around who can and can’t sell the magazine, or how they are sold. DSP explicitly states that the magazine is available to homeless people as well as “anyone else who could use a little solidarity”. And DSP told The Canary that this could include “refugees, low-waged and unemployed people”. A person only needs to pick up a bundle from Freedom Press in Whitechapel. “We don’t place conditions on vendors,” DSP told The Canary, “because we believe in autonomy and think sellers are best placed to self-direct their survival”. It also responded to vendor requests to look more legitimate by printing up bags for the bundles. The bags have a logo on the front and rights for street vendors on the back.

Since Spring 2018, when its first issue was published, nearly 3000 copies of DOPE have been distributed to vendors. As a result, the newspaper is a big success – not just for the publisher itself, but for those selling it. DSP said, for example, that in one instance:

One of our vendors made £100 by selling a bag of 20 outside the Bank of England – which was pretty astute business sense of them – and I’d guess that people who work there aren’t regularly reading radical Left publications.

And one of its regular vendors said:

This week, one of our regular vendors gave us this message:

"My name's Ubdiah, I sell DOPE Magazine. I live for this. I eat. It's a great magazine, thank you."

Furthermore, DSP also makes DOPE available for free to prisoners. And it told The Canary that the number of prison subscriptions is “steadily growing”.

At present DOPE is limited to London but DSP is now aiming to get it distributed further afield. In order to do so, though, it is looking for people in other cities who can organise such a scheme locally. More funding would also go a long way. At present, solidarity issues of DOPE are primarily funded by through DSP’s Patreon page but DSP also encourages people to contact it directly if they would like to support the project.

Beyond expanding the reach of DOPE, the publisher also has more books planned. Its Great Anarchists series will continue with editions on Oscar Wilde and Max Stirner. And DSP said more stand-alone titles are imminent too:

DSP has also released its first video, Subvertisers for London.

DSP said that “anarchism is still much maligned in the public consciousness although that is starting to change”. And that’s true. While there’s been a recent surge in public discourse about socialism, its black sheep cousin anarchism has remained firmly at the fringes. But DOPE‘s distribution model is one example of how anarchist praxis has a meaningful impact on people’s lives.

Words mean little without action to back them up. And DSP is showing just how words can be turned into action.