Trump is bringing the US closer to a 'very stupid and costly war with Iran', warns Tulsi Gabbard - Canary 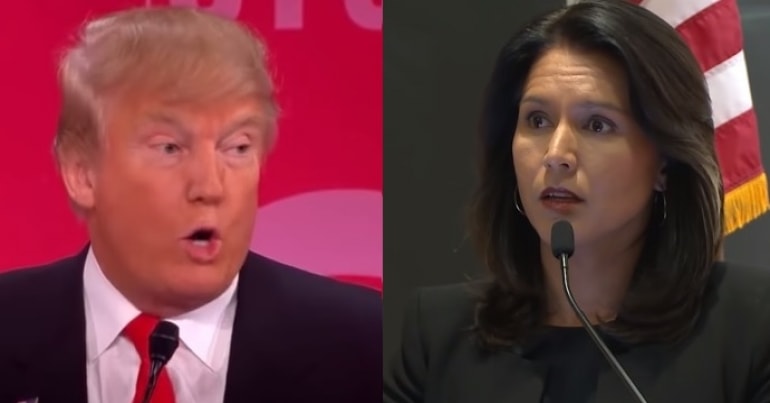 Donald Trump is on “the brink of launching” the US into war with Iran, warns 2020 presidential hopeful Tulsi Gabbard.

The military veteran and Major in the US Army National Guard blasted Trump in a new campaign video, slamming the possibility of “a very stupid and costly war with Iran”:

Trump promised to get the US out of “stupid wars.” But now he and John Bolton are on the brink of launching us into a very stupid and costly war with Iran. Join me in sending a strong message to President Trump: The US must NOT go to war with Iran. #TULSI2020 pic.twitter.com/Q1sHDNwZSy

It is perhaps the most forthright and ominous of all her statements on foreign policy. And she notes that the US invasion and occupation of Iraq killed over 4,000 US troops and hundreds of thousands of Iraqi civilians, strengthened Daesh (Isis/Isil) and al-Qaeda, and wasted trillions of dollars.

Gabbard argues that Trump’s listening to:

his national security advisor John Bolton and other warhawks in his administration who have championed the war with Iraq in the past and who have been pushing for war with Iran for years.

Having made foreign policy a central plank in her bid for the 2020 Democratic Party nomination, she pulled no punches, saying:

So now, we’re being lied to again, as Bolton and Trump push us closer and closer to a war with Iran that would prove far more costly and devastating than anything we experienced in Iraq.

According to the New York Times:

President Trump has sought to put the brakes on a brewing confrontation with Iran in recent days, telling the acting defense secretary, Patrick Shanahan, that he does not want to go to war with Iran… while his senior diplomats began searching for ways to defuse the tensions.

But we must contrast these reports with the actions of his government.

Trump pulled out of the Iran nuclear agreement (the JCPOA) despite the fact that – according to Britain, France, and Germany – the International Atomic Energy Agency:

has confirmed in 12 consecutive reports that Iran is abiding by its commitments under the Agreement.

He then proceeded to slap illegal sanctions onto the country. In March, his administration tightened the sanctions even further. In May, the Iranian government finally announced that they would suspend some of their obligations under the agreement. Bolton, meanwhile, has ordered military planners to draw up preparations to send 120,000 US troops to the Middle East. And the US has re-routed a fleet of warships on a training exercise towards the Persian Gulf. This decision apparently concerned the Spanish defence secretary enough that she ordered a Spanish ship to withdraw from the US-led fleet, though she said it was a “technical” and not a “political” move. The BBC also reports that “Dutch and German soldiers said they had suspended their military training programmes in [Iraq]”.

Former US colonel Lawrence Wilkerson, who served in three Republican administrations, also warned in April that the US was moving closer to war with Iran. And the New York Times cited an anonymous official who echoed this position.

In short, even if Trump doesn’t want war with Iran, he has surrounded himself with people who certainly appear to.