US officials discuss sending up to 120,000 troops to Middle East as war propaganda begins over Iran - Canary 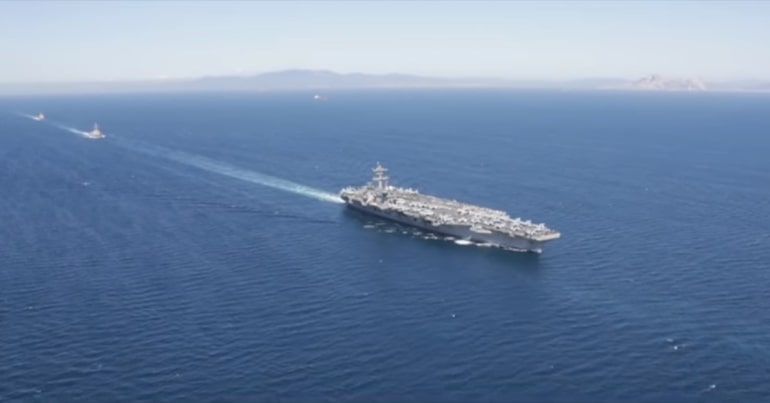 The Donald Trump administration is edging Washington closer to war with Iran. After pulling out of the Iran deal in 2018, the US once again applied crushing economic sanctions on the country. And recent reports show that top US officials are now drafting plans for war that could involve as many as 120,000 troops.

On 13 May, the New York Times published a lengthy article detailing US “military plans against Iran”. It showed that hard-liners in the Trump administration, led by national security adviser John Bolton, have discussed a plan:

that envisions sending as many as 120,000 troops to the Middle East should Iran attack American forces or accelerate work on nuclear weapons.

It added that the plans:

do not call for a land invasion of Iran, which would require vastly more troops.

Officials said they believed the most likely cause of a conflict will follow a provocative act, or outright attack, by the Revolutionary Guards’ navy.

If they [Iran] do anything, they will suffer greatly.

US “openly laying the groundwork for another war”

In recent days, the US government has deployed an aircraft-carrier strike group, as well as B-52 bombers, towards the Persian Gulf. This comes on top of years of the Trump regime ramping up tensions with Iran.

Congressmember Ilhan Omar claimed “Trump and… Bolton are openly laying the groundwork for another war”:

This is chilling. Trump and John Bolton are openly laying the groundwork for another war.

The only thing we’re relying on to prevent this is Congressional authority and Donald Trump’s sanity. We can’t rely on the latter, so we need to move on the former. https://t.co/pP723mq20h

Former US army colonel Lawrence Wilkerson also argued recently that Trump’s team was “setting the stage for a war with Iran”.

Presidential hopeful Bernie Sanders, meanwhile, insisted: “We do not need to fight another unnecessary war”.

Attacks on US forces and nuclear weapons

The International Atomic Energy Agency (IAEA) monitors Iran’s nuclear activities. According to a US Congressional Research Service report delivered on 10 May, the IAEA:

has verified that Tehran’s declared nuclear facilities and materials have not been diverted for military purposes.

The cartoon also suggests that a non-existent nuclear weapons programme has somehow replaced the family’s food. But as with corporate media coverage of Venezuela, the cartoon omits that US sanctions have been the cause of widespread economic suffering in Iran.

This is all quite incredible for a newspaper which apologised for its coverage of the invasion of Iraq. In 2004, the New York Times admitted:

Misled – but also doing the misleading. And today, the paper seems to have rejoined the latter camp.

CBS, meanwhile, reported on 13 May that:

Iran or Iranian-backed proxies used explosives to blow holes in four ships — two Saudi oil tankers and two others — in the straight of Hormuz, according to an initial [US government] assessment

The significance of this “assessment” begs the question: will the Persian Gulf incident become a repeat of the Gulf of Tonkin lie (used to justify war in Vietnam)?

As the US continues to ramp up tensions with Iran, it’s vital to recall the lessons of the invasion of Iraq. That means, unlike the New York Times, questioning official narratives justifying foreign aggression.