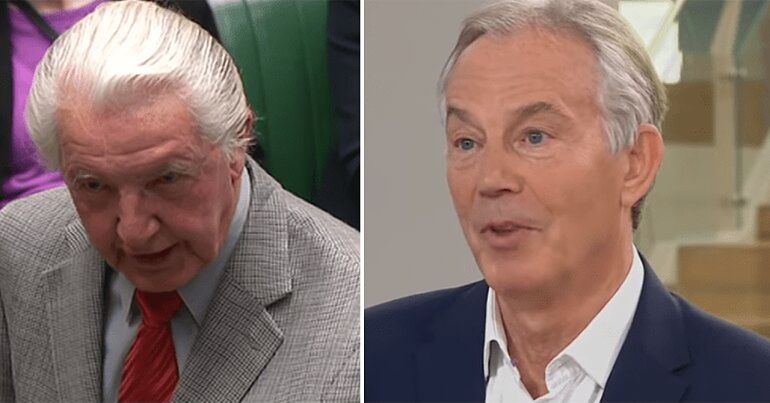 Labour veteran Dennis Skinner has a few choice words for Tony Blair. The former prime minister recently called for people to vote for parties other than Labour in the European elections, which take place on 23 May.

“He has to be exposed”

I do come across people who cannot vote for Labour, in which case I say ‘don’t stay at home – vote for any of the other parties’.

At the end of this there’s going to be a totting up and… it’s important that the Remain side comes out because MPs will be making decisions based on that.

What do you expect from Tony Blair? Don’t play the man’s game. He has to be exposed.

Branding Blair a “destructive force”, the MP for Bolsover continued:

He had a massive majority and he destroyed it — it all started in that shack in America with George [W] Bush. He went into Iraq and destroyed himself. He helped David Cameron and Theresa May into power. You’re talking about a man who made a mess of it.

After Blair’s initial victory in 1997, Labour lost five million votes and its membership slumped to under 180,000. That was after Blair flipped on the electorate and continued Margaret Thatcher’s legacy, such as privatising services like air traffic control. By contrast, under Corbyn, membership has soared to around 540,000 and the party increased its general election vote share by more than at any point since 1945.

The former Labour leader also recently praised Change UK, the new party of defected Tory and Labour MPs. Blair called the new centrist group part of a “fightback”, despite its line up of MPs like Anna Soubry – who was a cabinet minister under David Cameron.

In his comments to the Morning Star, Skinner also said Blair is trying to “destroy the Labour Party” under its new direction. In fact, it looks like Blair may have breached Labour Party membership rules with his comments supporting other parties. The rules state:

It’s a scandal that Blair, who presided over a million Iraq war deaths, is still in Labour. Not to mention it’s terrible PR for a party trying to shore up its anti-war credentials under Corbyn. Skinner is right to shut the former leader down. In fact, the party should kick him out immediately.