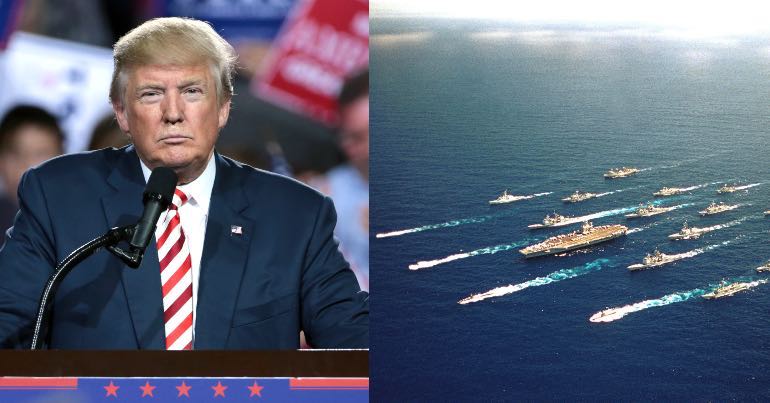 An unnamed “American official” has claimed that the US government is trying to pull Iran into a war. Quoted in the New York Times, the same official also said that any threat from Iran was insignificant.

These comments come as the US recently sent an aircraft carrier and bomber groups to the Persian Gulf, allegedly to ‘counter Iranian threats’. Donald Trump and his officials have apparently also discussed sending up to 120,000 troops to the area. And the US has ordered its “non-emergency” staff in Iraq to leave “as soon as possible” as tensions between the US and Iran continue to rise.

Trump pulled out of the Joint Comprehensive Plan of Action, or Iranian nuclear deal, in 2018. He then reinstated sanctions on the country. And Iran has now announced it is halting its commitment to some of parts of the deal too.

In spite of the military build–up near Iran, the New York Times has reported that any threat from Iran is small. The paper quoted an anonymous official familiar with the planning around Iran. They said that any intelligence of an Iranian threat was “small stuff”.

The paper then wrote that:

The official also said the ultimate goal of the yearlong economic sanctions campaign by the Trump administration was to draw Iran into an armed conflict with the United States.

In response to the US sending a carrier and bombers to the region, the head of Iran’s air force said the carrier “is a target”. And he insisted “the threats [from the US] have switched to opportunities”.

Secretary of state Mike Pompeo, meanwhile, asserted that the US wants a “deterrent” there in case Iran wants to “come after an American interest”. He also went on to say that the intention of the US is to put pressure on the Iranian leadership. He admitted:

the president wanted to make sure that, in the event something took place, we were prepared to respond to it in an appropriate way.

Pompeo had earlier boasted that the US government has “imposed the toughest sanctions ever on the Iranian regime”. And he went further, arguing that:

He claims all of this is to counter Iranian ‘destabilisation’ efforts in the region. And he maintains that the US wants to stop Iran from constructing a nuclear weapon.

But the International Atomic Energy Agency (IAEA) has maintained that Iran is not building a nuclear weapon. According to a US congressional report, the IAEA has:

verified that Tehran’s declared nuclear facilities and materials have not been diverted for military purposes.

Meanwhile, the last two decades have seen the US and its allies contribute to the ‘destabilisation’ of the Middle East via interventions in Iraq, Afghanistan, Libya, Syria, and Yemen.