Despite not writing one itself, the Brexit Party's got the most truthful manifesto of all - Canary 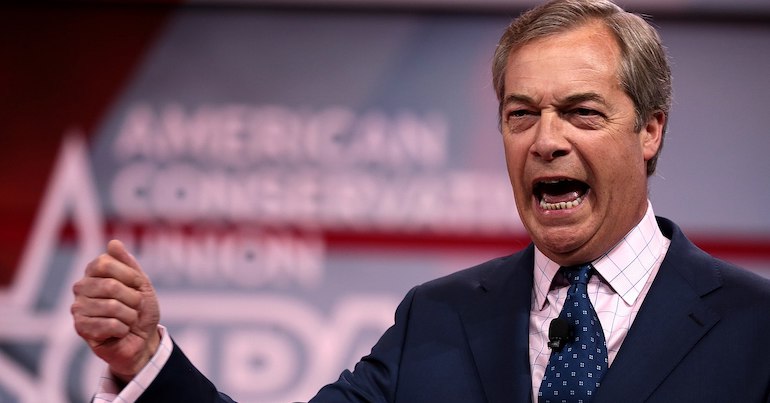 Anti-Brexit campaign group Led by Donkeys is back. It’s begun writing the manifesto Nigel Farage doesn’t want and plastering it on massive billboards across the UK.

Farage’s Brexit Party is ahead in polls for European elections on 23 May. Yet his campaign doesn’t have a manifesto. Farage has defended this. In an interview on Talk Radio, he said:

I will never, ever use that word manifesto. I think in most people’s word association, manifesto equals lie.

Without a manifesto, the electorate has little way of holding Farage or Brexit Party candidates to account. But the party made one big error. As Led by Donkeys noted on 12 April, when Farage launched his new party, he “forgot to register the website”:

Big day ahead for @Nigel_Farage and his new Brexit Party as he launches his European election campaign. Shame he forgot to register the website. https://t.co/cP6UlkdOMe

So Led By Donkeys made a Brexit Party website. On the website, the group states that Farage “refused to publish” a manifesto “ahead of the elections so we’ve done it for him based on his own words and the statements and policies of his Brexit Party candidates”. And Led by Donkeys is putting Farage’s actual words on billboards around the UK.

The group says, based on Farage’s previous speeches, that a “vote for the Brexit Party is a vote against the NHS”:

A vote for the Brexit Party is a vote against the NHS. pic.twitter.com/7OXma8sjGs

Brexit Party candidate @JGBartholomew wants to destroy our National Health Service. He's written books on how to do it. A vote for the Brexit Party is a vote against the NHS. (Location: Abbey Road, Neath) pic.twitter.com/9QiEzhNiDH

The complete moral hypocrisy of claiming a crisis in democracy, but running in an election with no manifesto and no policies. @ByDonkeys showing how to hold Farage to account. https://t.co/HtYDSgGNhp

And many people welcomed the return of its billboards:

The brilliant @ByDonkeys are doing the job the mainstream media are failing to do; namely, demonstrate the empty, selfish and destructive ideology behind the Brexshit party. Keep up the good work, donkeys! @BBCPolitics could take a leaf out of your book… https://t.co/Cu6Tr7ZaS5

Absolutely fabulous…
Looking forward to @ByDonkeys campaigns of certainty… unlike the masses deemed political parties where nothing appears clear from any of them.

In January, Led By Donkeys launched a national campaign and plastered Conservative MPs tweets about Brexit onto billboards around the UK. A Led By Donkeys spokesperson told The Canary that this was a “public information campaign to remind the public of the statements and promises made to us by our MPs”.

The group took a short sabbatical before turning the focus on Farage. It’s not clear yet what billboards might follow the NHS ones. But there’s a lot to include in the Brexit Party’s ‘missing’ manifesto.

For a start, speaking on the Andrew Marr Show on 12 May, Farage defended his EU referendum Breaking Point posters. Although these were reported to police for inciting racist hatred, Farage said:

It was the truth, and if you think about that poster it’s transformed European politics.

Or perhaps the group might turn to Farage’s previous comments about religion:

Are you on the left and thinking of voting for the Brexit Party?

This is what Mr Farage actually thinks of you. pic.twitter.com/NZJP4cDF3r

But then again, Led By Donkeys might not need to turn to past comments. Because despite boasting that 100,000 people signed up to support his party, Farage now needs to explain why this includes ‘Vladimir Putin from The Kremlin’. The Mirror revealed how easy it is to join the Brexit Party using a fake identity:

Then, on 15 May, an investigation from Byline Times claimed that there seems to be more donations for Farage’s party than there are visitors to its site:

Despite the Brexit Party poll lead, it’s clear that many voters might not know what policies they’re actually voting for. But thankfully, Led By Donkeys is doing an incredible job of holding Farage to account with the truth and nothing but the truth.