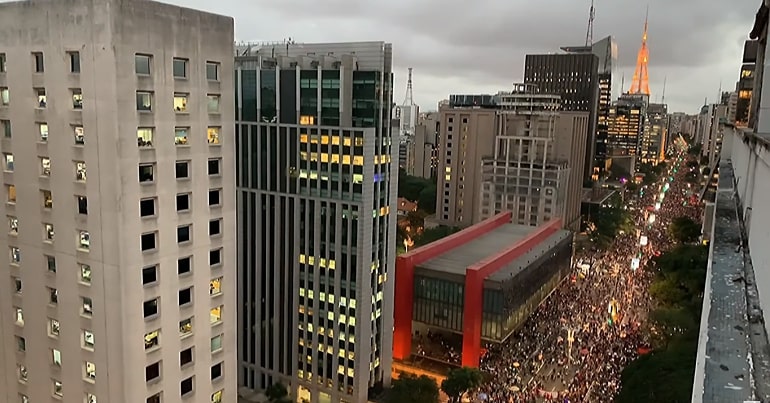 On 15 May, massive protests swept across Brazil in the biggest show of anti-government sentiment since the election of far-right president Jair Bolsonaro. Over a million Brazilians took to the streets to express anger over the Bolsonaro administration’s “war on education”, as well as a neoliberal pension reform.

Bolsonaro has proposed significant cuts to education, including a total elimination of funding for sociology and philosophy departments at public universities. He has also begun something of an anti-communist witch-hunt within Brazil’s public education system; his new education minister, Abraham Weintraub, has argued that crack was introduced to Brazil as part of a communist plot.

Brazilian author and educator Paulo Freire‘s liberatory philosophy is widely celebrated throughout the country. The late Freire helped draft educational programmes in Brazil in 1964, before the military dictatorship took power. Bolsonaro recently announced the desire to eliminate Freire’s work from school textbooks, as well as “any reference to feminism, homosexuality and violence against women”. Indeed, Freire’s words don’t quite fit with the president’s drastic privatisation and austerity programmes:

For the oppressors, what is worthwhile is to have more — always more — even at the cost of the oppressed having less or having nothing.

Once again, Brazil’s teachers will face dark days like those during the military dictatorship that halted one of the most important literacy programs in our history because it was viewed as a “communist threat”. This time, however, we don’t have Paulo Freire to defend us.

A ‘tsunami’ for education

The “tsunami” for Brazil’s public education rolled through every major city, as well as some of the country’s smaller cities:

Crowd estimates in today's massive national student and teachers strikes in just a few of the hundreds of cities where they took place. "Mil" means "thousand" in Portuguese. pic.twitter.com/4xuQih6Je7

Over 1 million students and teachers went on strike and flooded the streets all over Brazil to protest against Bolsonaro's education cuts. #ForaBolsonaro pic.twitter.com/PGhKYCv2K2

Daniel Hunt, editor of independent news outlet Brasil Wire and co-author of explosive new book Year of Lead: Washington, Wall Street and the New Imperialism in Brazil, spoke to The Canary from São Paulo. He said:

The education strike provided the platform for the birth of a mass anti-government movement. It was different to June 2013 because people were out those nights for often confused and contradictory reasons. This time everyone knew why they were there.

It was one of those demonstrations where everyone you know is out there.

Literally a battle for the country’s future, it was the beginning of the fightback against Bolsonaro’s war on education, a needless wave of ideological vandalism, where an imagined internal enemy of “marxist indoctrinators” are both persecuted and used as justification for dismantling of the public education system.

Bolsonaro lashed back at protesters, dismissing them as “imbeciles” who were “being used” by “a clever little minority”. Many Brazilians would argue that the president, who has been mired in humiliating scandals since his election in October 2018, is in no place to bandy insults about.

In the most recent of a catalogue of racist remarks, Bolsonaro pointed to an Asian tourist’s eyes and remarked: “Everything is tiny in there, no?”

Journalist Glenn Greenwald responded to the mesh of recent events by saying:

I don’t think anyone expected [Bolsonaro] to be so weak, fractured, plagued by scandal, & paralyzed by ineptitude this quickly.

The ongoing protests have exposed the shaky foundations that Bolsonaro stands on. As Hunt concluded: “It feels like the impetus in Brazil is shifting leftward again”.