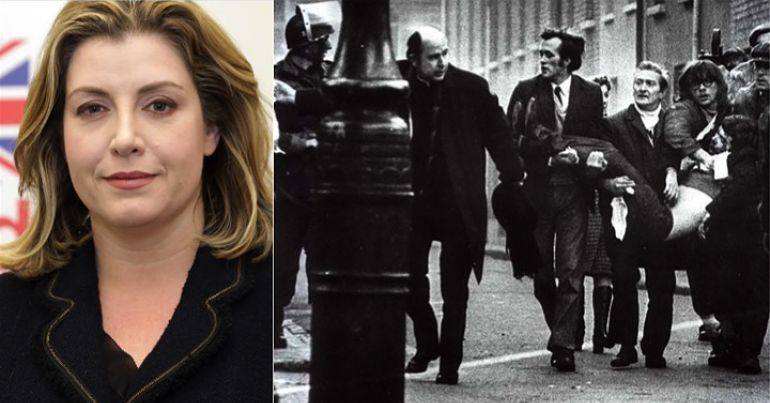 The Time for Truth Campaign (TFTC), which represents victims and survivors of the conflict in the north of Ireland, will hold a second march in Belfast on 9 June. The march will protest:

the British state’s continued failure to deal with the legacy of the past in the north of Ireland.

The British and Irish governments agreed a way of dealing with the past. This includes an independent body to investigate deaths that occurred during the conflict. But defence secretary Penny Mordaunt says she wants to end investigations of British soldiers.

While Mordaunt’s call comes after pressure from the Tory right, it’s caused great hurt to victims’ families and ignores her government’s agreement. It’s time the British government gets on with investigating war crimes instead of sucking up to Tory MPs.

The British and Irish governments, along with the north’s main political parties, announced a way of investigating the past through the SHA on 23 December 2014. The agreement described four institutions to do this:

But none of these institutions exist yet. So Mordaunt would do better to call for their establishment rather than calling for amnesties.

Ciarán MacAirt of the TFTC spoke with The Canary. He describes the approach of the British government in dealing with the past as:

a three-pronged strategy of denial, delay, and death.

MacAirt believes this approach “has done nothing but re-traumatise victims and survivors” and will result in this legacy being passed on to the next generation. The TFTC believes that the British strategy:

will also undermine confidence in the rule of law and support for our new policing and justice institutions.

He believes British armed forces “enjoyed illegal blanket indemnity from prosecution throughout the conflict”. But still he feels Mordaunt’s call to end investigations into British soldiers’ alleged offences “is cretinous”. And he feels it amounts to an attempt to “undermine the Stormont House Agreement and the rule of British law”.

were promised British government response and action in January 2019. Seven months later we are still waiting for a British response

The TFTC says its demands are simple. It wants the British and Irish governments to:

Get on with it

Mordaunt needs to stop appeasing the fringe right of her party; a group that doesn’t want British soldiers to face justice for alleged past offences. And as reported by The Canary, one Tory MP even called for a statute of limitations to ban criminal prosecution of British soldiers.

As well as being hurtful to victims’ families, this is a blatant denial of reality. Mordaunt and the rest of the British establishment would be better served getting on with investigating war crimes in Ireland as well as elsewhere in the world.