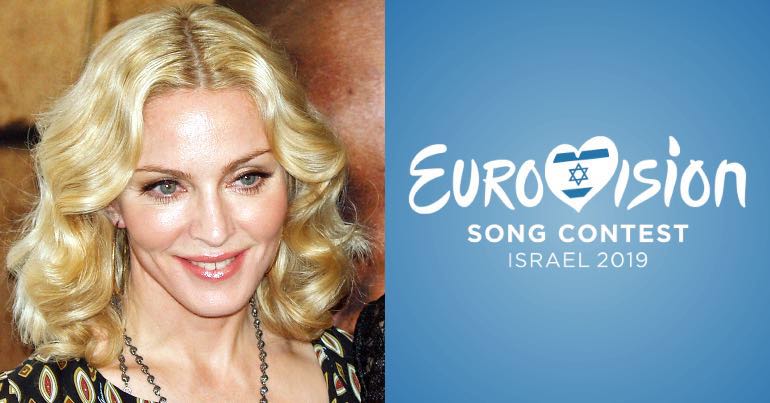 Palestinian activists have responded to Madonna’s insistence that she’ll go ahead with her performance at the Eurovision Song Contest. One accused her of ‘supporting murder and genocide’.

The show must go on?

The singer has stated that she’ll not allow people with a “political agenda” to influence her to stop singing. But the Palestinian Campaign for the Academic and Cultural Boycott of Israel (PACBI) replied by saying that she should listen to the Palestinian people and cancel her appearance. This marks the second time that PACBI has called on her to pull out of the competition.

Speaking to Reuters, Madonna said that politics will never stop her from performing. She argued that:

She also maintained that she’ll continue to speak out about human rights violations regardless of who carries them out. And she went on to declare that she feels heartbroken when she hears about violence in the area. She finished by saying:

I hope and pray that we will soon break free from this terrible cycle of destruction and create a new path towards peace.

“True solidarity means heeding the call of the oppressed”

PACBI welcomed Madonna’s self-proclaimed support for human rights. But it did not appear to accept her reason for performing. It replied to her statement by arguing that “true solidarity means heeding the call of the oppressed”. It also asked her if she would have performed in apartheid-era South Africa.

PACBI further pointed to Israel’s use of celebrities and cultural occasions “to cover up its human rights abuses”. And for this reason, it contended that:

At a time when fewer and few major artists are performing in apartheid Tel Aviv, Eurovision is exactly what Israel’s far-right government needs to distract from its crimes.

It ended its statement by urging her and other competitors in the event to cancel their appearances.

Artwashing Israel’s brutal oppression of Palestinians for a million dollars must be among the most immoral political agendas.

We urge you and all participants to withdraw from Eurovision. pic.twitter.com/O01NyIQmfq

Not so many fans

Many are not happy with Madonna’s stance. Jewish Voice for Peace (JVP) tweeted:

Dear Future @Madonna no one regrets turning down performing in Israel and standing for human rights and dignity. Choosing freedom is not a "political agenda." To choose to perform at Eurovision puts you on the wrong side of freedom fighters everywhere and causes harm. #EuroSemi2 https://t.co/LOxNmTHp79

One Palestinian activist, meanwhile, accused her of ‘supporting genocide’:

And Professor of Middle East Politics Laleh Khalili said that Madonna knows nothing about Israeli racism:

Hey Madonna, since you know nothing about Israel/Palestine, let me let you know that pretty much since 1993 (and likely a half century before that) "peace" has been a euphemism for full-spectrum Israeli racist supremacy over Palestinians. https://t.co/BFuMtwLMOi

The Canary contacted Madonna’s team for further comment, but had received no reply by the time of publication.

Ticket sales for the Eurovision have been lower than expected. And the predicted number of tourists to Tel Aviv has been lowered from 20,000 to 5,000. This is likely because of the boycott campaign.

Madonna should listen to the Palestinian call for a boycott. But it instead appears that she has put her own ego (or bank balance) ahead of support for basic human rights.