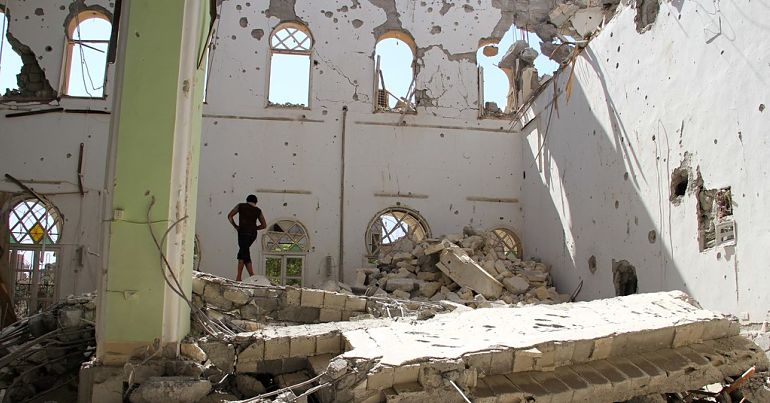 A leaked report prepared by the Organisation for the Prohibition of Chemical Weapons (OPCW) has poked serious holes in the official narrative used by the US, UK and French governments to bomb Syria in April 2018.

The report (published by the Working Group on Syria, Propaganda and Media) seems to undermine the theory that the Syrian army used helicopters to drop chemical weapons onto buildings in Douma, Syria. Instead, the engineering report suggests that the cylinders were likely placed manually in the locations discovered by investigators.

Any doubts over the authenticity of the report, meanwhile, seemed to dissolve on 16 May when the OPCW responded to journalist Peter Hitchens regarding the report:

Pursuant to its established policies and practices, the OPCW Technical Secretariat is conducting an internal investigation about the unauthorised release of the document in question.

Assessment by the engineering sub-team of the OPCW

A man named Ian Henderson signed the leaked 15-page report. Henderson was first documented as OPCW staff in 1998, and most recently in 2018. The engineering assessment was conducted between April and May 2018:

Using all available information, to evaluate the possible means by which these two cylinders arrived at their respective locations as observed.

It analysed how the cylinders may have arrived at their locations, and concluded that:

The dimensions, characteristics and appearance of the cylinders, and the surrounding scene of the incidents, were inconsistent with what would have been expected in the case of either cylinder being delivered from an aircraft.

In each case the alternative hypothesis [that cylinders were manually placed at location] produced the only plausible explanation for observations at the scene.

The report, therefore, contradicts the official narrative. Because the final OPCW report suggested that the Syrian army had dropped the cylinders from helicopters.

Whatever the reason for the document’s exclusion from the OPCW’s final report, the story is indisputably newsworthy. It calls into question both the official justification used by our elected representatives to illegally attack another country and the reputation of the OPCW. It is therefore noteworthy that almost nobody in the corporate media has picked up this story.

Russia… presented a draft resolution to the Security Council accusing the UN’s chemical weapons watchdog, the OPCW, of politicization just weeks before a new probe begins of chemical attacks in Syria.

The move comes just weeks before the beginning of a new investigation into chemical attacks in Syria, in which the OPCW will be able to apportion blame.

But this isn’t the first time that the OPCW has become mired in a politicised dispute.

“We know where your kids live”

One year before the invasion of Iraq, right-wing warhawk John Bolton pressured then-OPCW director-general José Bustani to quit. The reason? As the Intercept reported, Bustani had been:

In March 2002, Bolton reportedly went to the OPCW headquarters personally to tell Bustani:

[Dick] Cheney wants you out… You have 24 hours to leave the organization, and if you don’t comply with this decision by Washington, we have ways to retaliate against you.

We know where your kids live. You have two sons in New York.

Bustani was “pushed out of office” shortly thereafter. This episode suggests the US has form in trying to influence the internal workings of the OPCW. These efforts, moreover, appear extreme when forming justifications for military intervention.

The leaked OPCW report leaves us with important unanswered questions:

The OPCW now has a profound responsibility to answer these questions.