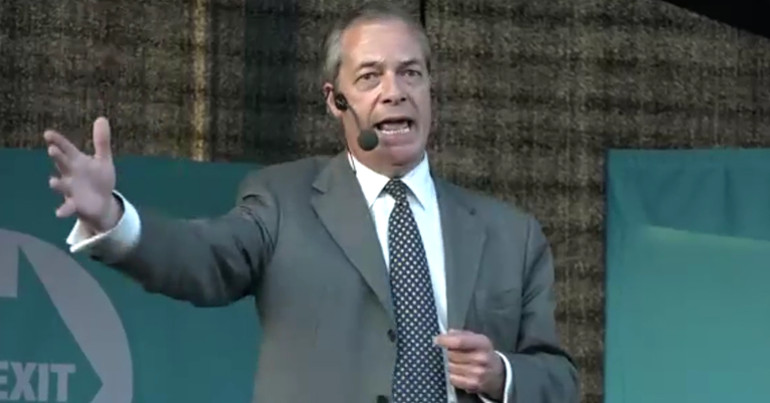 Once again, Nigel Farage has targeted another working-class area to try and win popularity and votes. Farage’s Brexit Party held an election rally in Merthyr Tydfil on 15 May.

But anti-fascist protesters were there to greet him. They made it clear that Farage wasn’t welcome in their town. Lois Jones was at the demonstration. She told The Canary:

Merthyr Tydfil is an area that is impoverished and deprived thanks to the UK government’s policies. The fascists insult local people by trying to recruit there amongst the suffering caused by austerity and the capitalist system.

They target the poor and feed on their misery, using working-class people as vehicles for hate for them to achieve power, and to push their hateful fascist ideology.

Protesters lay in the road, blocking access to the event, while others stopped traffic for around an hour, causing four miles of queues. Farage moaned that the protesters were attempting to “stop democracy.”

Remain campaigners have just blocked the road to stop the public from attending a Brexit Party rally in Merthyr Tydfil.

This attempt to stop democracy from taking place is a total disgrace.

But in the UK’s version of democracy, everyone has a legal right to protest. So people put Farage in his place on Twitter:

They’re not remain campaigners you absolute weapon. They are people who object to the awful ideas you support.
We’ve got a mixture of leavers/ remainers on our team who understand the real enemy is neoliberal dicks like you. Off you fuck from Merthyr now. Ta.

No. It's an attempt to stop a fucking xenophobic wanker mate. Might as well piss off back to the bus then eh? 🤔

Jamie Bevan was one of the protesters who blocked the road, preventing traffic from getting into the rally. He was arrested by the police and was offered a caution. He refused and was charged with obstruction of the highway.

It wasn’t a pro-remain protest. It was a protest to show our opposition to people with extreme right-wing views having a platform in Merthyr. We have seen the damage that UKIP and the Brexit Party have done in our communities and we wanted to say that they’re not welcome in Merthyr.

With free speech comes responsibility. It doesn’t mean that you can incite hatred and rip up communities, which Nigel and his friends are good at. They’re good at playing on people’s fears and negativity.

Meanwhile, a woman was allegedly assaulted at the protest. Jones claimed that:

A Brexit guy attacked a woman in front of her children. Fists were flying and he tried to get over the barrier to get to her. The police separated them and he didn’t get arrested. He accused the woman of spitting in his face, but she never did that. There’s loads of witnesses.

‘No welcome for fascists’

Clearly, Farage picked the wrong place to hold his Brexit Party rally. Many Merthyr residents are proud of their working-class history of anti-fascism. Bevan said:

There’s a rich and proud history of anti-fascism and internationalism and inclusivity in Merthyr. They see us as easy targets because we’re disenfranchised, because we’ve been economically suppressed. We do want change, but we don’t want the kind of change that Farage and his friends are offering. Public schoolboys like Farage and the British state are the cause of our disenfranchisement, not immigrants or the EU. We don’t want Farage’s poisoned ideologies spread about in Merthyr.

In 2015, Farage targeted another working-class area in Thanet, East Kent, when he stood as South Thanet MP. But he famously lost that election. Clearly, the working class can clearly see through his propaganda.