As Venezuela coup falters, US refuses to back its chosen 'president' over foreign investors - The Canary 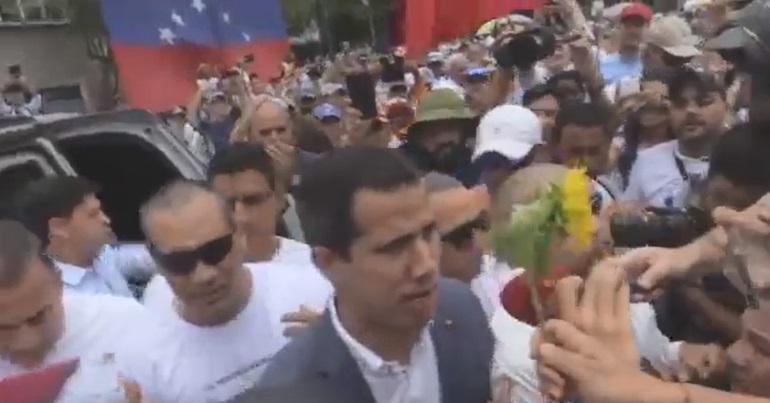 A Venezuelan opposition economist, Francisco Rodríguez, dropped a few bombshells in his weekly “LatAm this week” report, suggesting that the US won’t back its chosen ‘president’ over foreign investors.

Guaidó’s support limited in US and evaporating at home

Rodríguez’s 13 May report discussed an announcement that coup leader Juan Guaidó’s ‘government’ (which the US and nearly 50 other governments recognize) would make debt payments to foreign investors. The announcement has led to rifts within the opposition to Venezuela’s elected president Nicolás Maduro. It also exposed apparent limits to US support for Guaidó. The report stated:

The payment was approved last week by the [opposition-controlled] National Assembly, but several legislators and opposition figures objected to it. Guaidó’s attorney general issued a statement suggesting that the United States has refused the interim government’s request to grant an asset protection order to shield Citgo from attachment.

Citgo Petroleum is a US-based firm owned by the Venezuelan government. Since August 2017, it has been prohibited by US sanctions from sending dividends back to Venezuela. Trump has refused to issue an executive order protecting Citgo from seizure if investors are not paid. Rodríguez says that “almost the totality” of the debt holders are “U.S. and European institutional Investors”. He concluded:

U.S. authorities do not have enough confidence in the interim government [sic] so as to allow them to choose how to make use of the Venezuelan government funds in the U.S. They are also not sufficiently committed to supporting the new administration as to issue an executive order – as was done in Iraq in 2003 – protecting Venezuelan assets from attachment.

Rodríguez also estimated that an opposition rally on Saturday 11 May drew only 5,000 supporters.

Rodríguez said that the opposition-controlled national assembly suppressed debate on the decision to pay foreign investors, and that reports about it “have not been released to the public”.

In Venezuela, national assembly decisions have been ruled “null” by the Supreme Court since July 2016. The details were explained in this Venezuelanalysis article, but in large part this ruling was due to unconstitutional behaviour from the assembly and contempt for supreme court decisions. The national assembly’s functions were later taken over by a constituent assembly that was elected in July of 2017. The US-backed opposition refused to run candidates in that election.

Rodríguez is the chief economist for Torino Economics, a consultancy firm in New York. He was a key adviser to Henri Falcón, the opposition candidate who finished a very distant second in Venezuela’s May 2018 presidential election. Both Rodríguez and Falcón were accused of being in cahoots with Maduro for defying an opposition boycott of the election. At one point during the election campaign, Rodríguez responded publicly on Twitter to attacks from Juan Guaidó’s party, Voluntad Popular, asking it to “stop spreading lies”. Nevertheless, both Falcón and Rodríguez support the self-proclaimed “interim presidency” of Juan Guaidó.

Since August 2017, US economic sanctions have caused tens of thousands of deaths – mainly by forcing drastic cuts to food and medicine imports in an economy that was already in crisis. Trump’s ongoing coup attempt may be faltering for now, but it would be wrong to call it a complete failure. Because the US continues to show that being democratically elected and posing no security threat to the US offer no real protection if Washington wants to overthrow you.