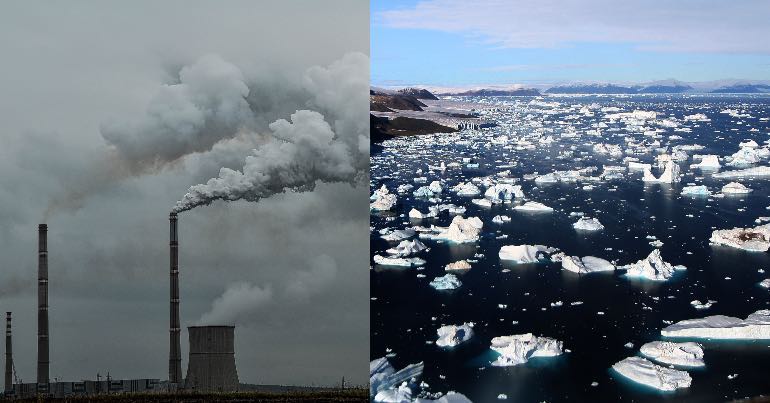 The level of CO2 in the earth’s atmosphere has hit levels never seen before in human history. According to the Mauna Loa Observatory in Hawaii, the amount of CO2 has now reached 415.26 parts per million in the atmosphere. The last time CO2 was at this sort of level was over three million years ago.

Scientists noted the record as it was also reported that temperatures in the Arctic hit a new high. Observers recorded temperatures of over 29°C in the city of Arkhangelsk in Russia over the weekend of 11 May. By comparison, the average high temperature is usually 12°C at that time of the year.

Reacting to the record

On Twitter, journalists and scientists alike voiced their concern at the CO2 record. Meteorologist and journalist Eric Holthaus pointed out that this counts as a first in all of human history:

This is the first time in human history our planet's atmosphere has had more than 415ppm CO2.

Not just in recorded history, not just since the invention of agriculture 10,000 years ago. Since before modern humans existed millions of years ago.

Scientist Ralph Keeling said a rise like this is just not normal and calls into question the sustainability of our current behaviours:

Comment from Ralph Keeling, director of Scripps CO2 Program: “Every year it goes up like this we should be saying 'No, this shouldn’t be happening. It’s not normal." This increase is just not sustainable in terms of energy use and in terms of what we are doing to the planet.”

But Greenpeace argued that news like this is nothing new or surprising at this stage:

And a Twitter account which provides daily updates on the level of CO2 in the atmosphere put the explosion of CO2 into perspective. It showed CO2 levels are on an “upward trajectory”:

We've updated our animation of the Keeling Curve to reflect 2019 readings. pic.twitter.com/jFWJf8gQEZ

Certain countries have taken steps trying to lessen the impact of climate breakdown. For example, German chancellor Angela Merkel announced that she plans to make Germany carbon neutral by 2050. She said governments can do this by storing excess CO2 or by ‘offsetting it’.

The Irish parliament recently voted to declare “a climate and biodiversity emergency”. This made Ireland the second country in the world to do so. In spite of this, Ireland still lags behind other EU countries when it comes to its use of renewable energy.

And although a recent headline in the Irish Times stated that Ireland went “25 days without using coal to generate electricity”, it didn’t show the full picture. In fact, electricity generated via renewable sources only made up 30% of the power. The largest part of the fuel mix during this period was gas, which made up 60%.

Climate chaos is only going to continue to worsen as our governments twiddle their thumbs and try to buy time. But there is no buying time. People have to act now.

Climate journalist David Wallace-Wells argued that we have gone very far in the wrong direction:

I am 36 years old. The month I was born, global carbon concentrations were 340 ppm. Today the figure is 415. The preindustrial average was 280, and scientists consider 350 the start of the danger zone. We have gone a very long way, very very fast.

And atmospheric chemist Dr Heather Price used events in her life to point out just how quickly the situation has got out of hand:

I will soon see an ice age scale >100ppm CO₂ increase within my life.

My life in CO₂

Because of this, we have to take the initiative ourselves. We must ensure that we leave a planet worth living on to our children. And if we don’t, they will be right to condemn us all.

Want to know more about climate change? Support Greenpeace, Campaign Against Climate Change, Friends of the Earth, and 350.
Do you want to support students on climate strike? You can by visiting this website.