The US is laying groundwork for war with Iran, says former US army colonel - Canary 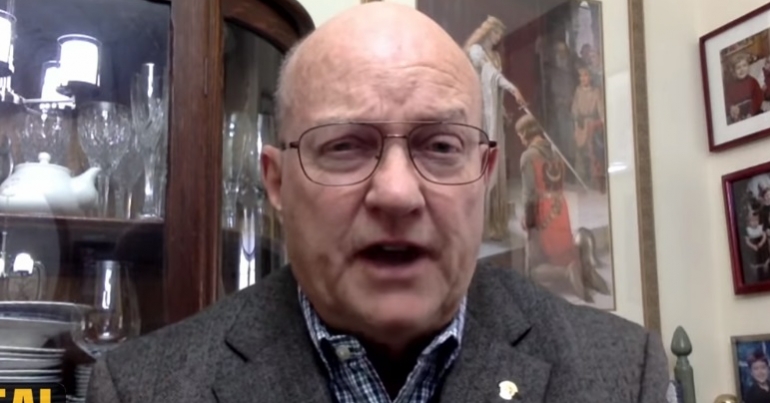 The current US government is moving closer to war with Iran, according to Lawrence Wilkerson, a former US Army colonel. The former George W Bush administration official was speaking to The Real News Network on 17 April.

Two days after Trump’s move, US secretary of state Mike Pompeo claimed there were “very real” connections between the Shia-Islam-dominated Iranian government with the Wahhabi-Islam fundamentalist al-Qaeda . The implication is that the White House could use the 2001 Authorization for the Use of Military Force, which the US Congress passed to go after those who committed 9/11 attacks, to attack Iran; an idea that Senator Rand Paul completely rejected.

‘Setting the stage for war a with Iran’

Wilkerson said that Pompeo’s attempts to link al-Qaeda with Iran is one of the last building blocks:

in setting the stage for a war with Iran; for the use of military force against Iran.

Wilkerson served in three separate Republican administrations; those of Ronald Reagan, George H W Bush, and George W Bush. And he told The Canary that, during that time, he worked on national security affairs at the US Pacific Command, with the Chairman of the Joint Chiefs of Staff, and the State Department.

‘There is almost no contact between Iran and Al Qaeda’

my experience, as well as my research over the last 15 years in academia, leads me to believe… there is almost no contact [between Iran and al-Qaeda].

There have been times where al-Qaeda might have made overtures to the Iranian government or to parts of that government, like the Quds Force or IRGC, but they’ve always been rebuffed

The “greatest state sponsor of terrorism” in the Middle East is not Iran, but Western ally Saudi Arabia

He also noted Iran’s “fierce attacks on the terrorists groups in Syria” and that “Iran itself has been attacked by terrorist groups”, often with the support of the Saudi government and Pakistan’s ISI (Inter-Services Intelligence).

Iran has been a receptor… of terrorist attacks just like the United States, Europe, and other places have been. So Iran is not a sponsor of terrorism.

And he concluded, as The Canary has outlined previously:

In fact, after the 9/11 attacks, the Iranian government made repeated overtures to the US, offering its support in targeting al-Qaeda and toppling the Taliban in Afghanistan. But the US ultimately labelled Iran part of its “axis of evil”.

The march towards war

In 2015, Barack Obama warned that “Without a [nuclear] deal [with Iran] we risk even more war in the Middle East”. For that reason, many saw this deal as Obama’s crowning achievement. In May 2018, however, Trump unilaterally withdrew from the Joint Comprehensive Plan of Action (JCPoA) (aka the Iran Nuclear Deal); and re-imposed harsh sanctions on Iran. Obama had previously admitted that these sanctions had “helped to cripple” the Iranian economy. The British, French, and German governments rejected the move, saying that the International Atomic Energy Agency:

has confirmed in 12 consecutive reports that Iran is abiding by its commitments under the Agreement.

In other words, Trump’s sanctions on Iran are illegal.

Wilkerson argued that national security adviser John Bolton (a key advocate of the invasion of Iraq) was actually ‘orchestrating‘ most of Trump’s policies towards Iran. So while Trump may claim he’s just pushing for a “better deal”, warmongers like Bolton – who have long had Iran in their sights – may be deliberately pushing for war.

In 2007, former NATO commander Wesley Clark explained[13:47] that a few weeks after the 9/11 attacks, a US government official told[13:51-14:19] him about a secret ‘hit list’ of countries the Bush administration planned to “take out”:

starting with Iraq, and then Syria, Lebanon, Libya, Somalia, Sudan and, finishing off, Iran

Iran is out of control… It’s supposed to be a US client state, as it was under the Shah. And it’s refusing to play that role.

If we oppose both the sanctions and potential military conflict with Iran, we need to speak up now – before it’s too late.