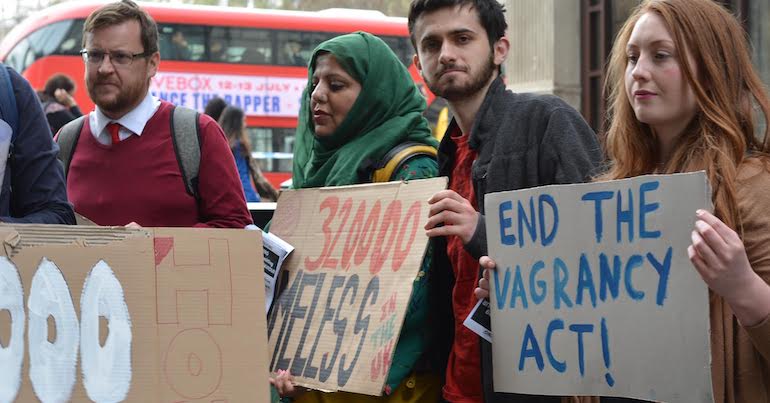 In December 2018, stories about Gyula Remes caused outrage and shock after he died sleeping rough just yards from the houses of parliament. But since then, homeless people in London have faced ongoing police harassment. Little has been done to prevent more deaths on the streets, or to tackle the UK’s homelessness crisis. A new grassroots campaign is taking action to highlight these issues.

The action gathered people willing to break the 1824 Vagrancy Act intentionally. In 2019, it’s still used against people sleeping just outside parliament. Campaigners met in Westminster to hand out their “own anti-social behaviour notices to MPs and the general public”. 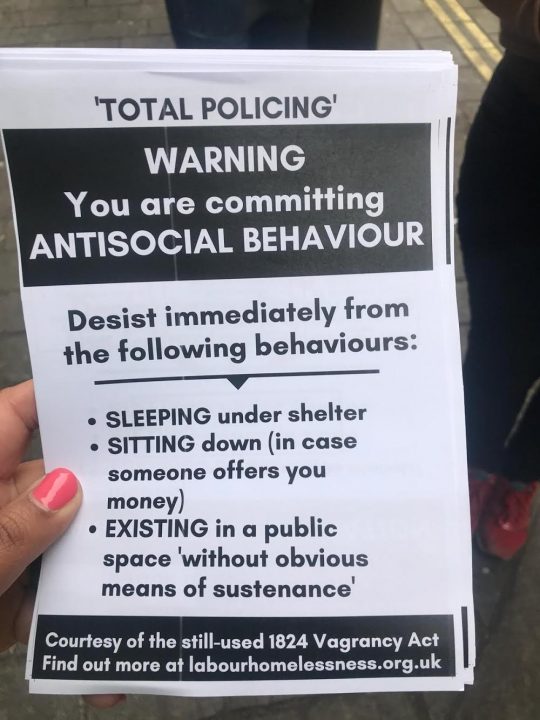 Groups demanded an end to the criminalisation of homelessness. Campaigners told The Canary:

Today we sent Westminster a message. Rough sleepers didn’t cause this homelessness crisis – it was decades of housing and wealth going to a privileged few, combined with brutal austerity throwing thousands into desperate poverty. Yet it is the rough sleepers of Westminster being punished, as police try to bar them from public spaces under the draconian 1824 Vagrancy Act, so MPs can pretend the crisis isn’t happening. 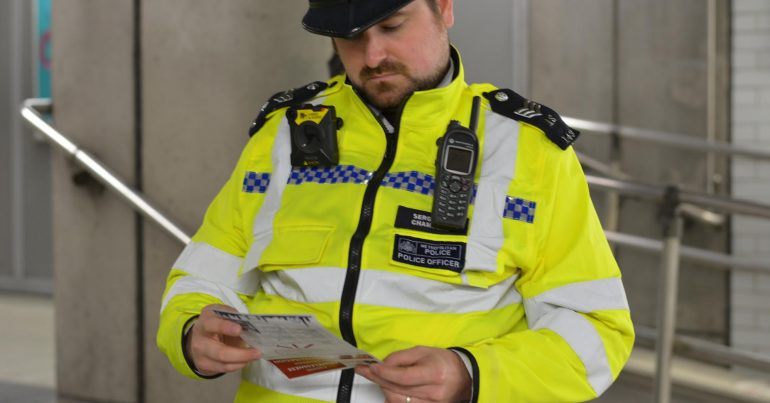 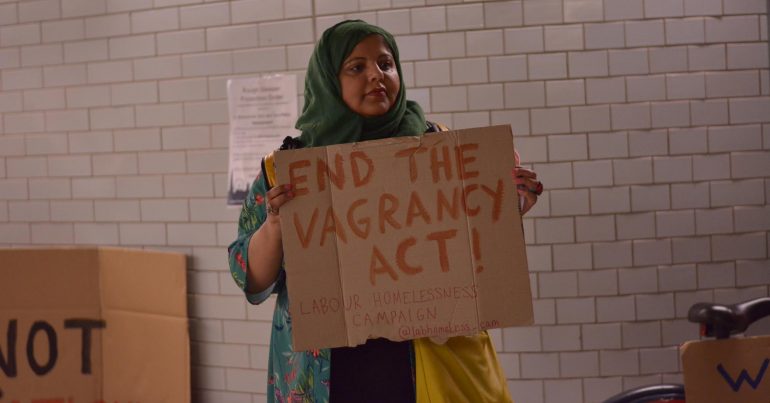 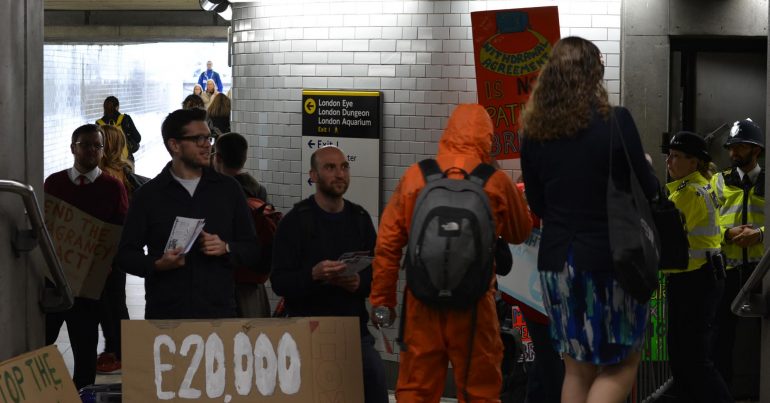 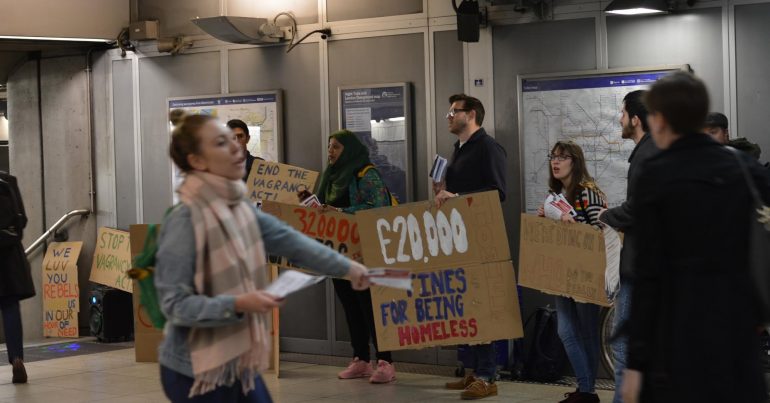 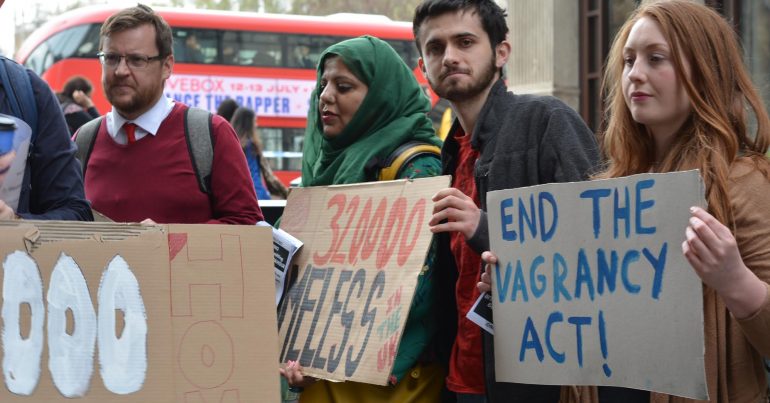 Since Remes’ death, an ongoing programme of police harassment has targeted homeless people in Westminster. Police are using the Vagrancy Act to drive people out of the many tunnels around Westminster where lots of them sleep. But there’s no offer of any long-term help or housing solutions. The act is used alongside community protection notices (CPNs). These threaten fines of up to £20,000 for people sleeping in the tunnels or ‘positioning themselves for begging’. Under the law, rough sleepers face arrest, fines, and a criminal record for simply existing in a public space. Recently, many people have also been accused of being Extinction Rebellion protesters despite sleeping in the same place for months.

The Vagrancy Act made it a criminal offence to be homeless. As Labour Homelessness told The Canary, its continued use aims:

to drive rough sleepers out into the cold, so that MPs can walk through the tunnels of Westminster station pretending the homelessness crisis doesn’t exist. We should be helping, not harassing those who are homeless.

Yet, as the group explained:

Parliament had the chance to vote down the Vagrancy Act, but it chose not to. So we took action ourselves, going down into the tunnels ourselves to break the Vagrancy Act and demand an end to criminalisation of homelessness.

Rough sleeping has soared under consecutive Conservative-led governments, up 165% since 2010. In 2018, Crisis recorded a 20% rise in the numbers of people rough sleeping in London alone. This included, “1,382 people sleeping rough for the first time, a rise of 28%”. As The Canary reported in April 2018, the number of homeless people dying on the streets or in temporary accommodation had more than doubled over the last five years. Streets Kitchen reported in March 2019 that at least “799 homeless deaths” occurred over the past 18 months.

And as Labour Homelessness states, this doesn’t come from ‘individual choice” but through a “political choice”:

made every day by those in power. Its the choice made in every cut to welfare benefits for the worst off and every cut to mental health and addiction services.

It stems from every choice to let buildings stand empty, accruing capital for a few, while human beings sit shivering outside.

Every choice to let rents soar while wages stagnate. Every choice by public figures to use stigmatising and dehumanising rhetoric…. to prioritise profits over people.

As a spokesperson told The Canary: “The fight to end the criminalisation of homelessness is only just beginning.”

Featured image and all other images via Labour Homelessness Campaign, used with permission