Alan Sugar puts his foot in it again, with an attack on Corbyn that fails basic maths - Canary Workers’ Co-op 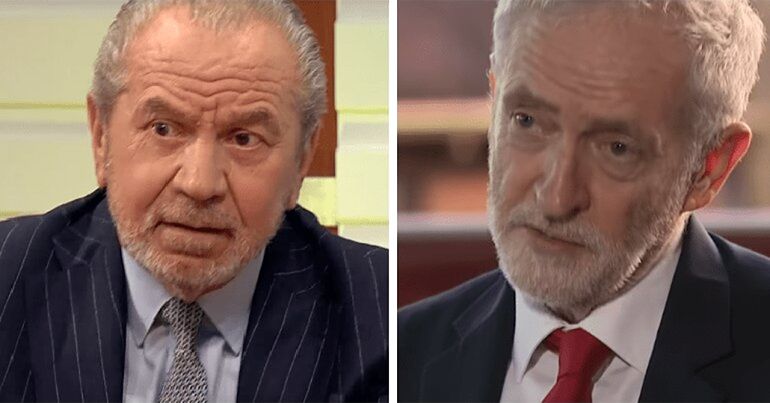 Alan Sugar has been trying to land a political punch on Jeremy Corbyn for a while. Last week, Sugar got confused while trying to bash the Labour leader and ended up promoting a socialist approach.

But the Apprentice host put his foot in it again, with a political attack that misunderstands how tax works:

you are right and that is ok. but a person who earns over £100k under @jeremycorbyn might end up with just 30K i.e. 70% tax . No incentive to work or prosper, no future managers no future company successes. = no employment of others https://t.co/GIk4OaQ3rE

To be fair, @Lord_Sugar’s stupidity does give us an opportunity to explain how tax really works. If the top rate of tax was 70%, it doesn’t mean that people pay 70p in the pound on their whole income. They only pay 70% on the amount over the top rate (currently £150k). Get it? https://t.co/BI8VT2KwiY

These changes would only impact the richest in the UK. In fact, Labour has exempted 95% of the public from any tax increases.

On social media, many others simply laughed at Sugar:

Dear @HMRCgovuk amazingly, it appears @Lord_Sugar hasn't got a clue what the tax rates are or how tax is calculated. Feel free to charge him whatever you like, he'll never know. https://t.co/QcGaHSlrqR

One of these must explain Alan's inability to grasp marginal tax rates: he is catastrophically dim, a liar, or about to realise his accountant has been embezzling from him for years. Which is it? https://t.co/lXYumsiNuK

A number of onlookers couldn’t believe that the billionaire was an adviser to Labour, and still sits in the House of Lords:

A former Labour lord who ‘advised’ them on business doesn’t know what the marginal tax rate is.

I can only assume the sum total of Alan Sugar’s “tax advice” to New Labour was that “manufacturers of shit stereos and word processors should pay less tax”.

One coffee, no sugar please

I wonder why Alan Sugar doesn't want a Labour Government?

So he doesn't have to pay more tax. https://t.co/pBo0SMSAoM

In other news, Sugar has pledged again to leave the UK if Corbyn becomes prime minister. Along with Labour’s modest tax increases that only impact the top 5%, this could make quite a good campaign leaflet for the opposition party.