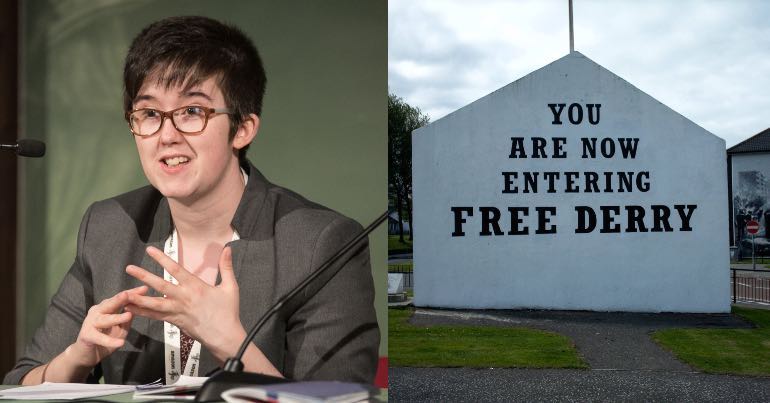 The New IRA has taken responsibility for the murder of journalist Lyra McKee. Her death is a reminder that the Irish question must not be ignored in the era of Brexit.

Brexit has caused tensions in the north of Ireland to increase in recent years. This is partly because of the Democratic Unionist Party’s (DUP) role in supporting the Theresa May government. And its arguments against the Irish backstop and the Good Friday Agreement (GFA) have not helped matters.

McKee was shot on 18 April while covering a riot in Derry. A journalist who was beside her when she was shot said that “police put her in the back of their vehicle and rushed her to hospital where she died”.

The New IRA has since issued a statement to the Irish News. It said that it deployed following “an incursion” by the police forces into the Creggan area and that:

In the course of attacking the enemy Lyra McKee was tragically killed while standing beside enemy forces.

The group offered “full and sincere apologies” to McKee’s family and friends. And it added:

We have instructed our volunteers to take the utmost care in future when engaging the enemy, and put in place measures to help ensure this

McKee’s partner, Sara Canning, spoke at a vigil the day after her murder. And she declared:

This cannot stand. Lyra’s death must not be in vain because her life was a shining light in everyone else’s life.

McKee’s friends also staged a protest outside the offices of Saoradh, a dissident republican group with alleged links to the New IRA. They covered their hands in red paint and then imprinted these on the building.

Friends of slain journalist Lyra McKee have put red paint handprints over the front of dissident republican HQ Junior McDaid House in #Derry in protest over the murder of the 29-year-old #LyraMcKee pic.twitter.com/jzhnTM0GcX

Saoradh had previously called on the New IRA to apologise for McKee’s murder.

Various politicians in the north of Ireland, including members of the DUP and Sinn Féin, also published a statement, saying:

Lyra’s murder was also an attack on all the people of this community, an attack on the peace and democratic processes.

The politics of Brexit

The DUP and other hard-Brexiteers, however, helped to create the tensions that led to McKee’s murder. Brexit supporters have continually shown their ignorance of and lack of concern for the GFA.

When the anti-GFA Saoradh first launched, it said:

The DUP has declared it opposes the Irish backstop, and by extension the GFA. A former Tory minister, meanwhile, said “the Irish really should know their place” when it comes to Brexit. And then there’s Jacob Rees-Mogg insisting:

If we leave without a deal, the main culprit will be the obdurate Irish Government’s threats about the phantom Border issue.

With comments like this, it’s no surprise that tensions have risen.

It is Britain’s ongoing influence in Ireland that groups like the New IRA rail against. And as award-winning journalist Patrick Cockburn has argued:

In ignoring the nationalist community in Northern Ireland, the British government is committing the same costly mistake it committed in the 50 years before 1968 which led to the fiercest guerrilla conflict in western Europe since the Second World War.

Lyra McKee’s murder is a horrifically blunt reminder of what we stand to lose if Brexit further increases tensions in Ireland.