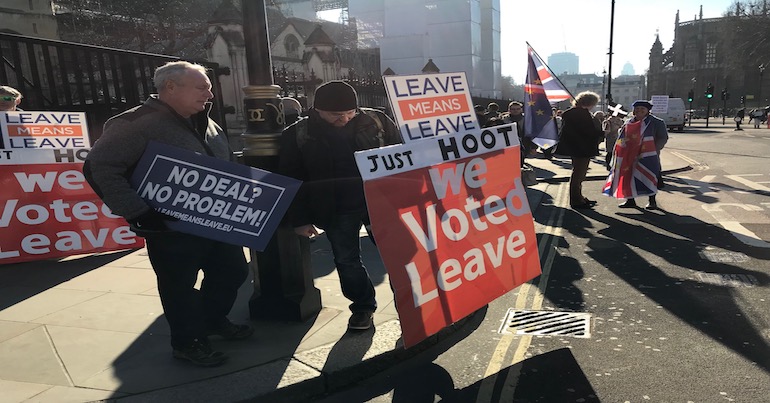 A unionist politician declared live on radio that Ireland’s independence from the UK will be the cause of any border that appears on the island after Brexit. Jim Allister, leader of Traditional Unionist Voice (TUV), made the comments. Appearing on The Nolan Show on BBC Radio Ulster, he said:

Remember, there wouldn’t have been a border if the 26 counties [the Republic of Ireland] hadn’t decided to leave the United Kingdom.

Any border which emerges because of Brexit, he said, is “something they [the Irish government] created”. During the same appearance, Allister also stated he has “no issue with border checks”. This is because the north of Ireland is “a separate country”.

The border was actually imposed by the UK on Ireland as part of the Anglo-Irish Treaty of 1921.

The reaction to Allister’s comments came hard and fast:

We could go back further if he would like to!
There wouldn't be a border if they hadn't invaded our country!
But what has happened in the past should stay there and people should look at moving forward.

One commenter went to the trouble of educating Allister on Irish history:

The whole of Ireland decided to leave UK… but carved off the bits that wanted (by planters) to stay pic.twitter.com/JFlf8p4N0e

Allister and his party support a hard Brexit. He has previously said:

There can be no compromise in favour of the Backstop for any period of time.

He also believes that the backstop must be rejected if the north of Ireland is going to remain an “integral part of the United Kingdom”. He went further, saying:

If because of EU intransigence such leads to a ‘No Deal’ then so be it.

He has also stated that the intention of the Irish government is to “annex” the north. This, he asserted, is in order to “detain it [the north of Ireland] within the EU customs and single market orbit”.

"There wouldn't have been a border if the 26 counties hadn't decided to leave the UK."@JimAllister reacts as @simoncoveney sets out Irish no-deal #Brexit measures@StephenNolan pic.twitter.com/5LLVTnKL3L

The Democratic Unionist Party (DUP) has likewise been critical of the backstop. As The Canary previously reported, DUP leader Arlene Foster said:

The backstop must go.

She has also referred to it as the “problem” that is causing the lack of progress with Brexit. More recently she has called the backstop a “toxicity”.

And in January, the BBC’s John Humphrys proposed to an Irish politician that Ireland rejoins the UK. Speaking to the Irish minister of state for European affairs, he suggested that Dublin is “telling” the UK what to do. Instead, he asked the minister if Ireland should rejoin the UK.

Allister has also made comments about individual Irish politicians. He recently called the Irish deputy prime minister a “serial meddler”. And similarly, he said that Irish prime minister Leo Varadkar “needs to be put in his place” by the British government.

With the Brexit deadline next month, Theresa May has said, “time is of the essence”. And unionist Brexiteers making ignorant statements about Irish history isn’t helping anyone