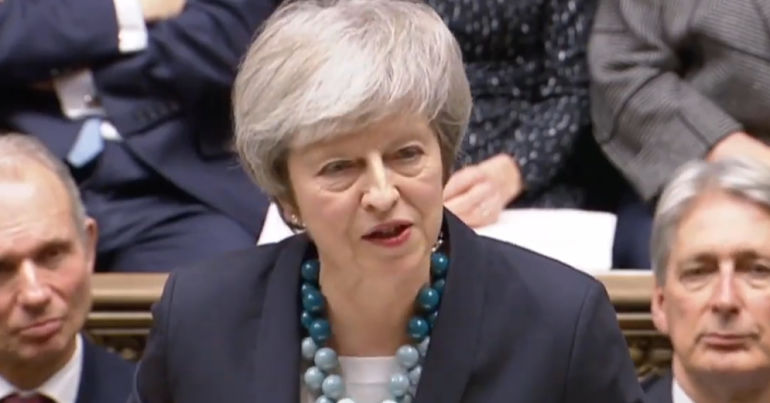 On 10 December, Theresa May addressed MPs to formally delay the ‘meaningful vote‘ on Brexit. The vote on the prime minister’s Brexit deal was due to go ahead on 11 December.

Delay to the meaningful vote

May said during her statement that although the debate has gone on for three days it must be delayed over “widespread and deep concern” over the Irish backstop. As there’s no current Brexit deal without the backstop, the prime minister will be meeting with EU leaders and the EU Commission.

Deputy group leader of the SNP Kirsty Blackman asked May when the vote will be deferred to but no clear answer was given. The prime minister suggested it could happen in January 2019.

House of Commons Speaker John Bercow stated it was “deeply discourteous” for May to halt the Brexit debate. He said that a minister could move a motion to adjourn the debate. MPs would then effectively vote on whether or not to have the vote. Bercow believes this to be the best way forward.

The leader of the Democratic Unionist Party (DUP) Arlene Foster issued a statement and tweeted her views on the backstop:

Just finished a call with the Prime Minister. My message was clear. The backstop must go. Too much time has been wasted. Need a better deal. Disappointed it has taken so long for Prime Minister to listen.

DUP deputy leader Nigel Dodds said the vote would not get through the House of Commons whilst the backstop remained part of the deal.

Jeremy Corbyn asked the prime minister if she plans on making only small changes to her Brexit plan. As reported by the Guardian, he went on to say that the Irish prime minister, Leo Varadkar, claimed that May’s red lines were to blame for this mess.

Corbyn grilled May over her inability to carry on in government. He concluded by saying that if the prime minister could not renegotiate her deal then “she must make way” for those that can.

Just off call with PM. Expressed my deep frustration that the interests of a divided Tory party are taking priority over the interests of country and that delaying the vote is an abdication of responsibility, leading to even greater chaos.

And Liberal Democrat leader Vince Cable said he would back Labour in a vote of no confidence against the Conservative government. Sturgeon has also expressed support if Corbyn goes for such a vote.