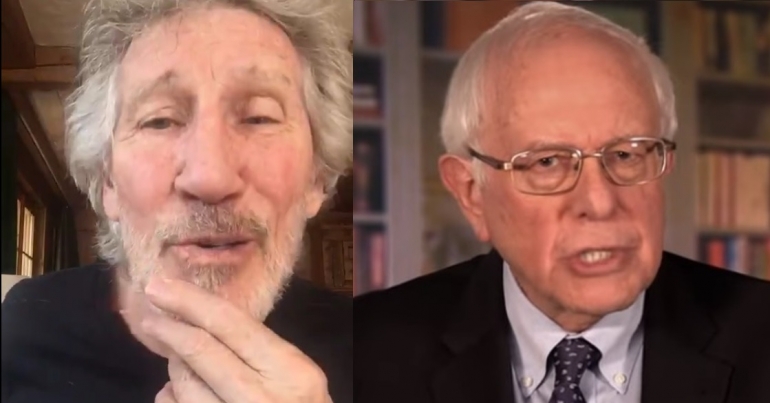 Bernie Sanders has disappointed many people on the left with his latest tweet on Venezuela. The self-proclaimed ‘democratic socialist’ has historically had a mixed record on foreign policy, which not all of his supporters have been willing to face. But this time, Pink Floyd legend Roger Waters had no problem taking Sanders to task.

The big mistake Sanders made was to play into the propaganda of the US regime-change machine – particularly regarding the smokescreen of ‘humanitarian aid‘:

The people of Venezuela are enduring a serious humanitarian crisis. The Maduro government must put the needs of its people first, allow humanitarian aid into the country, and refrain from violence against protesters.

Unfortunately, this is not Sanders’ first fail on Venezuela.

Roger Waters was on hand to hold him to account on this occasion, though, saying:

Bernie, are you f-ing kidding me! if you buy the Trump, Bolton, Abrams, Rubio line, “humanitarian intervention” and collude in the destruction of Venezuela, you cannot be credible candidate for President of the USA. Or, maybe you can, maybe you’re the perfect stooge for the 1 %.

Waters has also called out billionaire Richard Branson for his ‘Live-Aid-ish’ PR stunt.

you know better than to endorse a stunt led by war criminals who have snuck weapons in aid shipments in the past. This stance will not make democrats like you more and will only lose you support from socialists

Others raised some legitimate questions with Sanders:

"#IntervencionMilitarYA", which means "military intervention now" is trending globally. Do you think real #Venezuelan people would call for the US to invade and bomb their own country? They are not even hiding the true intend of the #FakeAids.https://t.co/YtpI4Jd4R9

The replies kept coming in:

LOL. Bernie, you never stop disappointing me, but I'm not surprised, after all, you're a politician of the US empire.

Those who are reading this tweet: I recommend the documentary "The War on Democracy" (John Pilger)

With some unavoidable critiques:

https://t.co/UUFXy8T2m3 – going along with the plan for US violations of international law against human rights in return for US oil then?
You claim to be both democratic & socialist yet in this crisis you abandon both principles for #Venezuelans right to autonomy. Disappointing

One of Sanders’ strongest public supporters in the past also blasted him for his apparent inability to comprehend the Washington’s role in destroying Venezuela. Commentator and comedian Jimmy Dore pulled no punches during his live broadcast on 23 February:

Super sad to see Bernie continue to repeat CIA talking points and propaganda. He is repeating the words and narrative of war criminals that first must convince people that another OIL RICH nation is ruled by a dictator & needs invading Why he does this shit is anybody's guess. https://t.co/udGFiomD9m

Venezuela is experiencing an ongoing US-backed coup attempt. And US sanctions are designed to “make the economy scream”, according to establishment experts. This fact wasn’t lost on Dore, who was visibly upset over Sanders’ foreign policy failure. He lamented that it is “too bad that this is the best we can get”:

Push them ‘to the left’

Dore would later say that he was:

the one keeping the flame going [for Bernie Sanders during the 2016 presidential elections].

Dore also explained that he wants to:

push Bernie left to make him a better candidate on foreign policy.

Sanders has taken many principled stances over the years. Most recently, he vocally opposed the US- and UK-backed Saudi destruction of Yemen. The reason why so many people support politicians like Sanders is because of the principled policies they promote; not because they are sycophants or lemmings. That means that even some of Sanders’ staunchest supporters are willing to call him out for his weakness on imperialism.

We must do the same with all of our politicians; regardless of who they are.