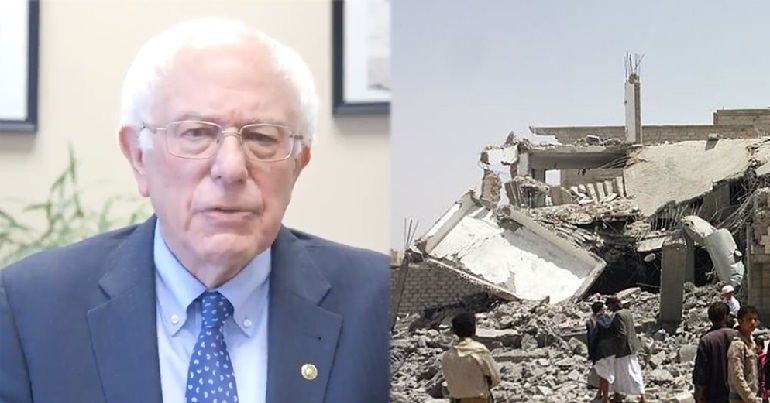 On 28 November, the US Senate voted to end Washington’s support for the Saudi-led war in Yemen by 63 votes to 37. The bill, co-sponsored by senators Bernie Sanders, Mike Lee, and Chris Murphy, demanded that the US government stop its support for the war within the next 30 days. More than 50 leading figures – including public academic Noam Chomsky and former secretary of state Colin Powell – signed a letter urging the bill to be passed.

Let me caution everybody: given the extremely obscure and complicated rules of the United States Senate, this fight is far from over.

What we won this afternoon was a vote to discharge our resolution out of the foreign relations committee. And that was a major, major victory. But what we have got to do is continue our effort to make sure that we end up winning the resolution to proceed… and then finally we have got to win a final passage on this legislation.

For the first time, the U.S. Senate just voted to advance a resolution withdrawing U.S. Armed Forces from an unauthorized and unconstitutional war.

Let us bring this catastrophic war in Yemen to an end, and help bring peace and humanitarian aid to this tortured country. pic.twitter.com/rbThxPXuEG

In other words, the latest vote is mainly just an important procedural step which, according to Foreign Policy, has “set up what could be an unprecedented legal showdown between the White House and Congress over war powers”.

Those in favour of the bill argued that it is “Congress’s constitutional responsibility to authorize when the American military engages in war”. Meanwhile, at least five senators who voted against the bill reportedly “received financial contributions from firms representing Saudi interests between 2016 and 2017″.

In the wake of Jamal Khashoggi’s murder

The US and British-sponsored war in Yemen is causing untold misery and destruction. The UN has called it the world’s “worst humanitarian crisis”, and Amnesty International has accused the Saudi-led coalition of committing “war crimes”. Up to 85,000 Yemeni children have now died from starvation. And if the war continues, famine will likely be the fate of millions more Yemeni people.

But many senators were less concerned about innocent Yemeni lives than about Donald Trump’s woeful response to the murder of Washington Post journalist Jamal Khashoggi. Trump’s refusal to accept apparent CIA evidence that Saudi crown prince Mohammed bin Salman ordered Khashoggi’s death angered US lawmakers, who then voted against him in the Senate. As the BBC reported after the vote:

Many senators are unhappy with Mr Trump’s response to the murder of Saudi journalist Jamal Khashoggi.

Presenting the vote simply as a “blow to… Trump”, however, threatens to turn the humanitarian catastrophe in Yemen into the latest episode of the Trump Show. So we must not reduce the crisis in Yemen to US power politics.

The US government is nonetheless doing more to end its support for the war in Yemen than Britain. The UK government has supplied Saudi Arabia with £4.6bn of arms since its war began in 2015. But with no hint of irony, the UK government keeps pretending it supports a “political solution” in Yemen.

In the words of Bruce Riedel, a CIA veteran and former adviser on Middle East policy:

If the United States of America and the United Kingdom, tonight, told King Salman, ‘This war has to end,’ it would end tomorrow. Because the Royal Saudi Air Force cannot operate without American & British support.

The solution is clear, then. Like Denmark, Germany, the Netherlands, and Finland, the US and UK must stop arming Saudi Arabia. They have the power to stop Yemen’s suffering, and a moral responsibility to use it.