Theresa May had high hopes for her deal in Glasgow. But Scottish people told her to ‘f*** off’. - Canary 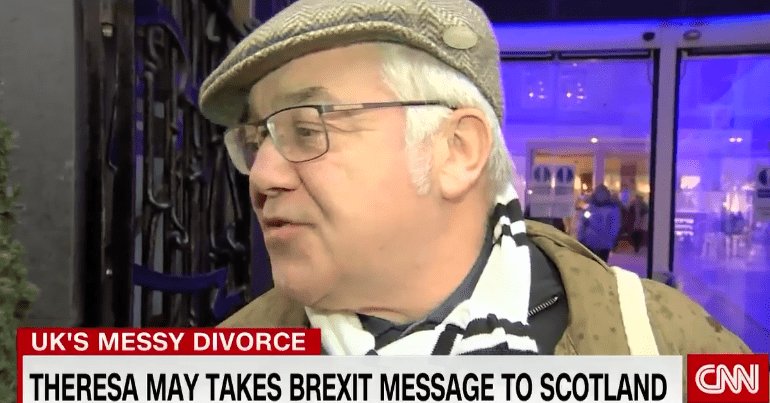 Theresa May seemed to have high hopes for selling her Brexit agreement in Glasgow, insisting that she had a “good deal for Scotland”.

But Scottish people weren’t actually too pleased, with one person simply telling her to “f*ck off”:

Scotland's voice is being ignored

👀 Glaswegians don't hold back on Theresa May, the Tories and Brexit.

When a CNN reporter asked one person what he’d say to Theresa May, he replied:

I think she’s got a brass neck to suddenly ask for Scotland’s support when she’s ignored us, disrespected us and undermined our parliament.

Not long off call with PM. She tried to tell me Scotland’s ‘distinctive’ interests had been protected. I pointed out that there isn’t a single mention of Scotland in the agreement, that it disregards our interests, and puts Scotland at a serious competitive disadvantage.

In the Commons on 14 November, the SNP Westminster leader also argued that “utter contempt has once again been shown to the Scottish government, its parliament, and its people”.

This is a tightly controlled PR event, in fact this is close as we’re able to get. It’s being held at a leather goods factory known for supplying to British parliament. And in Scotland, it’s about as friendly as it gets for Theresa May.

May hiding from the media isn’t new, though. In fact, stage-managed campaigns seem to be May’s go-to. Representatives from the BBC, Sky News, ITV, ITN, Channel 4 and Channel 5 complained together when May dodged several interviews at autumn 2018’s Conservative Party conference. The mainstream broadcasters suggested the prime minister’s conduct undermined a “functioning democracy”.

Then there’s the 2017 general election. Sky News deputy political editor Beth Rigby described May’s campaign as “the most controlled” she’d ever seen. When May visited Cornwall during the election, for example, CornwallLive reported:

In Scotland, meanwhile, May’s coordinated show for the pre-approved cameras didn’t appear to go very well. And Glaswegian people simply weren’t having it.