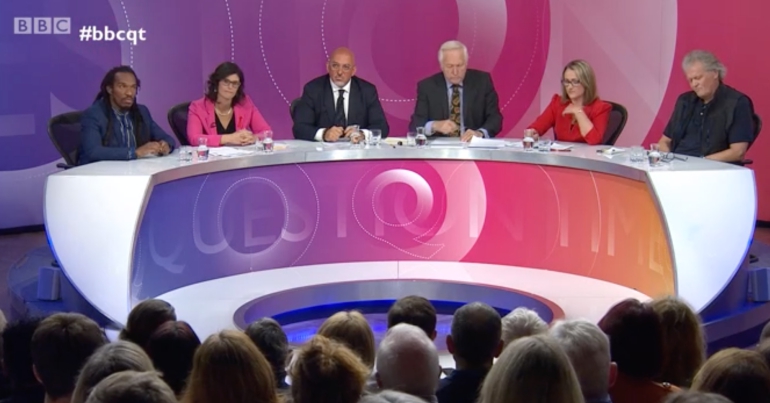 Professor Benjamin Zephaniah appeared on Question Time on 30 November. Much of the programme focused on the ongoing mess that is Theresa May’s proposed Brexit deal. But while the politicians came up with the usual spiel, poet and writer Zephaniah cut through the crap.

“The workers will get screwed”

Zephaniah injected a dose of reality into the debate:

It doesn’t matter if we have Brexit, Remain or Leave, however you look at it, trust me, the workers will get screwed.

‘However you look at it, the workers will get screwed’@BZephaniah says that Brexit or no Brexit, it is about picking the option that does the least damage to the country’s workers. #bbcqt pic.twitter.com/yvD8lejQJG

Many social media users agreed that Zephaniah nailed it:

Hats off to the legend that is @BZephaniah – he has a finger on the pulse of our communities. Either way, it'll be the working class that gets screwed by #Brexit. #BenjaminZephaniah https://t.co/b6KKdqJJKl

“Fish should be in the sea”

I believe all fish should be in the sea.

A beautifully simple answer by Benjamin Zephaniah on BBC Question Time to a question about the future of UK fisheries policy post-Brexit if we sign the withdrawal agreement……. pic.twitter.com/hhV2tDiGJa

Many people appreciated his “his beautifully simple answer”:

Benjamin Zephaniah on fishing
“I believe all fish should be in the sea” #BBCQT pic.twitter.com/mrHxYzw77d

Others said it was the best comment of the night:

@BZephaniah best comment on #bbcqt last night was Benjamin Zephaniah’s “fish belong in the sea”. Treating fishing like factories is emptying our oceans. We need less of it not more.

Cutting through the crap

Zephaniah’s direct comments were perhaps unsurprising though, as this uncompromising honesty is what he does best. In an interview published by Red Pepper, Zephaniah said:

Reforming does nothing. That’s why I’m an anarchist.

Meanwhile, when he was touted as the next Poet Laureate, he responded:

I won’t work for them. They oppress me, they upset me, and they are not worthy. I write to connect with people and have never felt the need to go via the church, the state, or the monarchy to reach my people. No money. Freedom or death.

After hours of media time devoted to Brexit, May’s deal, the financial implications, and general crap about ‘taking back our country’, Zephaniah’s simple but direct statements rang true with people. Devoid of bullshit and party political manoeuvring, his comments stood out with those two simple observations: “Workers will get screwed over” and “Fish should be in the sea”.