In the Brexit media battle, Jeremy Corbyn is wiping the floor with Theresa May - Canary 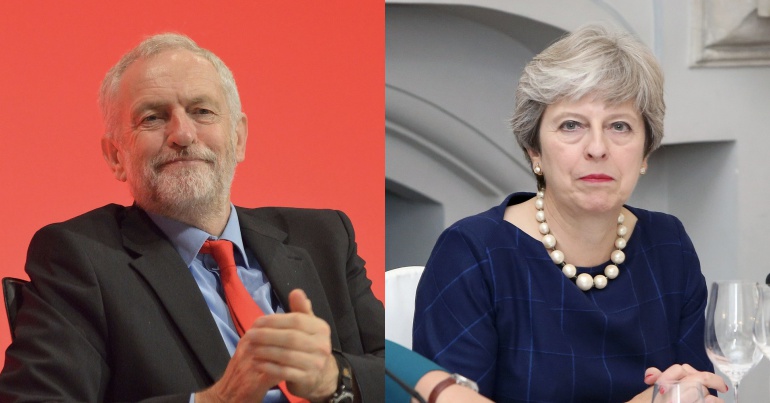 On 29 November, Jeremy Corbyn and Theresa May had full media schedules. But there was a big difference. While Corbyn gave warm, relaxed interviews, May did quite the opposite, trying to exclude journalists from press events.

“Hope for the future”

Corbyn appeared on ITV’s This Morning, and gave a relaxed interview, despite host Phillip Schofield trying to interrupt. Corbyn later thanked the show and shared one of his key messages on Twitter. He explained that he has great “sympathy with people in our country that are going through terrible stress”. And he insisted:

I think we have to recognise that we live in a country that’s increasingly divided, increasingly impoverished. Some people are losing hope in the future…

Thanks to @ThisMorning for having me on. #ThisMorning pic.twitter.com/iXGbiY1NnD

He also calmly dealt with the latest controversy about a televised debate with May, pointing out that it “would be quite difficult” to actually have a debate if May is on the BBC and he’s on ITV. And the public’s response to him was warm:

After seeing @jeremycorbyn on @thismorning it’s so obvious this country would be better off with him as our leader. He very clearly answered questioned posed unlike @theresa_may who avoids clear answers all the time! Let’s work hard to get #JC4PM and get #ToriesOut #BrexitChaos

May, on the other hand…

Meanwhile, the prime minister tried to sell her Brexit deal to Scotland. But to put it bluntly, she fucked it up.

For a start, she excluded key Scottish newspaper the National from the press conference. So it refused to cover her visit:

Tomorrow's front page: This is where we would have reported on Theresa May's visit to Scotland. We were barred from her press conference with the other newspapers, so we have refused to cover it. pic.twitter.com/vKyWcYrZr5

Meanwhile, other reports suggested that local residents didn’t know she was there anyway. As the National asked:

if the Prime Minister visits a village and nobody sees her, has she really been there at all?

According to the liar, May, she's speaking to voters. If this article is anything to go by, she's avoiding voters. It's all an illusion. https://t.co/uZ8znLUhmr

And May’s Scottish media fiasco didn’t end there. She visited Bridge of Weir with Scotland secretary David Mundell – whose local MP is the SNP’s Gavin Newlands. But they apparently didn’t inform Newlands of their visit:

.David any chance of you, or indeed the Prime Minister herself, notifying me that you are visiting my constituency?#brexit #BrexitChaos

As the National reported, “by failing to inform the SNP MP of the visit to his constituency, Mundell and May were in breach of Commons convention”.

When an MP visits another MP's constituency they are required to notify the local MP of their intention. @theresa_may and @DavidMundellDCT visited Scotland today. They failed to notify @GavNewlandsSNP they were conducting business in his constituency! | #Scotref #Indyref2 #Brexit pic.twitter.com/3MUDqvatwM

And to make matters even worse, SNP MP Mhairi Black pointed out that it looked like May didn’t even know which constituency she was in:

I received an email from @theresa_may's office an hour or so before she arrived in Bridge of Weir, and haven't heard of her actually visiting anywhere in my constituency? Couldn't possibly be that the Prime Minister didn't know Renfrewshire has two constituencies?…

You’d think it couldn’t get any worse, right? But no, May didn’t stop there.

On the same day that Corbyn spoke to ITV, May visited a GP’s surgery in Camden. But local reporters from the Camden New Journal were apparently told not to turn up:

We were warned not to ‘jeopardise’ being given exclusive words (a statement sent later) by turning up to Theresa May’s visit to our patch https://t.co/yWffqhjlCp

Downing Street may have told journalists from the local paper not to show up. But they did. As the outlet reported, they were asked to leave and only take photos “on public land” outside. Apparently, May’s team didn’t consider the NHS-owned Kentish Town Health Centre to be public land. Go figure.

At one point, the reporter was told: “You don’t want to jeopardise your exclusive words.”

It wasn’t clear what these “exclusive words” were, and as it went on to report:

Later that day, photos of Mrs May crouched on the floor talking to a patient’s baby were released to media outlets.

By the power of social media, quite a few people now know about this:

Re-running the playbook from the last general election. Good on @NewJournal for not being intimidated and standing up to this sort of behaviour https://t.co/VViwzU654d

Without even trying, then, Corbyn won the media battle against May hands down.

If only Brexit was so easy.