As Trump twists and turns after Putin summit, there's one Noam Chomsky video we all need to watch - Canary 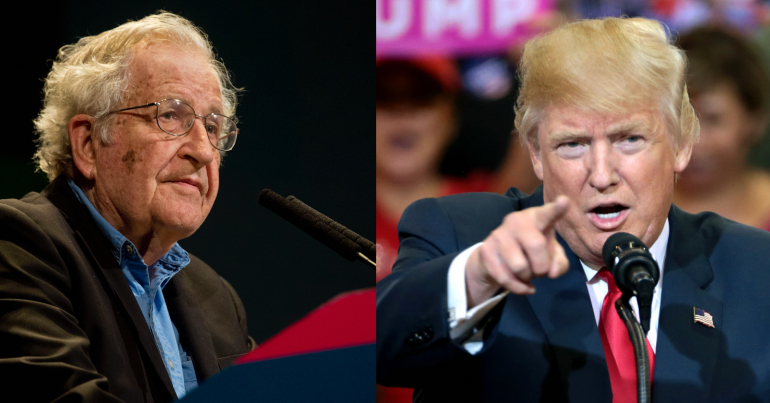 US President Donald Trump has been twisting and turning ever since his summit with Russian President Vladimir Putin. And amid his flip-flopping, there’s one video of Noam Chomsky that we all need to watch.

“A sort of double-negative”

The fallout from Trump’s disastrous Putin summit has been dominating headlines all week. Having been roundly criticized by members of both the Democratic and Republican parties, and even by some of his own supporters, Trump has begrudgingly backtracked from some of his remarks, though always with qualifiers and equivocation.

Reading from prepared remarks back in Washington, Trump said that he had ‘misspoken‘ when answering a question during the summit about Russian meddling in the 2016 presidential election. He claimed that, when he said “I don’t see why it would be Russia,” he had meant to say the exact opposite. He stated:

I said the word “would” instead of “wouldn’t”… The sentence should have been, “I don’t see any reason why it wouldn’t be Russia.”

He then added that this would have rendered the sentence “a sort of double-negative.” He also said that he accepted the US intelligence community’s contention that Russia had interfered in the 2016 presidential election, but equivocated by adding that it “could be other people also.”

According to renowned academic Noam Chomsky, however, Trump’s outlandish antics do not represent anything truly newsworthy. In an interview with TeleSur earlier this year, he argued that his public ‘mistakes’ are a distraction that needlessly preoccupy mainstream media outlets and draw attention away from issues of actual importance. He explained:

Trump’s role is to ensure that the media and public attention are always concentrated on him. So every time you turn on a television set, it’s Trump. Open the front page of the newspaper? Trump… He’s a conman basically; a showman. And in order to maintain public attention, you have to do something crazy. Otherwise, nobody’s going to pay attention to you. If you do normal things, you’ll be – you know – way back somewhere. So every day, there’s one insane thing after another.

He goes on to argue that this distraction creates a smokescreen for the ruling class:

From the point of view of US power, he’s harming it, but from the point of view of US elites he’s giving them everything that they want… While this show is going on in public, in the background the wrecking crew is working: [House speaker] Paul Ryan, [Senate majority leader] Mitch McConnell, the guys in the cabinet who write his executive orders. What they’re doing is systematically dismantling every aspect of government that works for the benefit of the population. This goes from workers’ rights to pollution… of the environment, rules for protecting consumers. I mean, anything you can think of is being dismantled. And all efforts are being devoted, kind of almost with fanaticism, to enrich and empower their actual constituency, which is super-wealth and corporate power.

Don’t fall for the distraction

Chomsky also makes it clear that, on the two most important issues facing humankind today – global warming and nuclear war, Trump’s policies are “the worst… that he has carried out – the most dangerous.” But despite these two issues constituting “existential threats” to the continued existence of organized human life, the mainstream media is focusing very little on the Trump presidency’s negative impact in these areas.

To defeat Trumpism, we must not dwell on the constant headlines reporting his latest buffoonery. Instead, we must organize and fight for the reforms that the world most desperately needs to address these coming catastrophes.

Clearly, the mainstream media is no longer a source that we can rely on to disseminate information on the issues that really matter.

– To see information on truly progressive candidates in the US, see Our Revolution and Justice Democrats. If you’re a US citizen, you can also join and participate in the activities of the Democratic Socialists of America. And if you want more voters to choose the best candidate over the best-funded candidate, then support anti-corruption groups like Move to Amend, Represent.US, and Wolf-PAC.